The Chartered Institute of Fundraising has awarded Sir Lenny Henry with the Special Recognition in Fundraising Award for his contribution to fundraising.
The one-off award was announced yesterday morning just before Sir Lenny began his opening plenary at this year’s Fundraising Convention, presented entirely virtually for the first time.
The award was made in recognition of Sir Lenny’s achievements with Comic Relief and for his continued role in championing diversity and inclusion across the creative arts.
Henry co-founded Comic Relief in 1985 with comedy scriptwriter Richard Curtis in response to the famine in Ethiopia. Through a series of telethons on the BBC, expanded with the introduction of Sport Relief, Comic Relief had by 2015 raised over £1 billion for charitable work in Africa and in the UK.

The first live fundraising show was held on 4 April 1986, and the first Red Nose Day campaign was held on 5 February 1988.
Henry is also a campaigner for the greater representation of Black and Minority Ethnic (BAME) people in the entertainment industry.
He addressed the issue of diversity and representation in the charity sector in his opening plenary, together with sharing his experience of fundraising through Comic Relief. 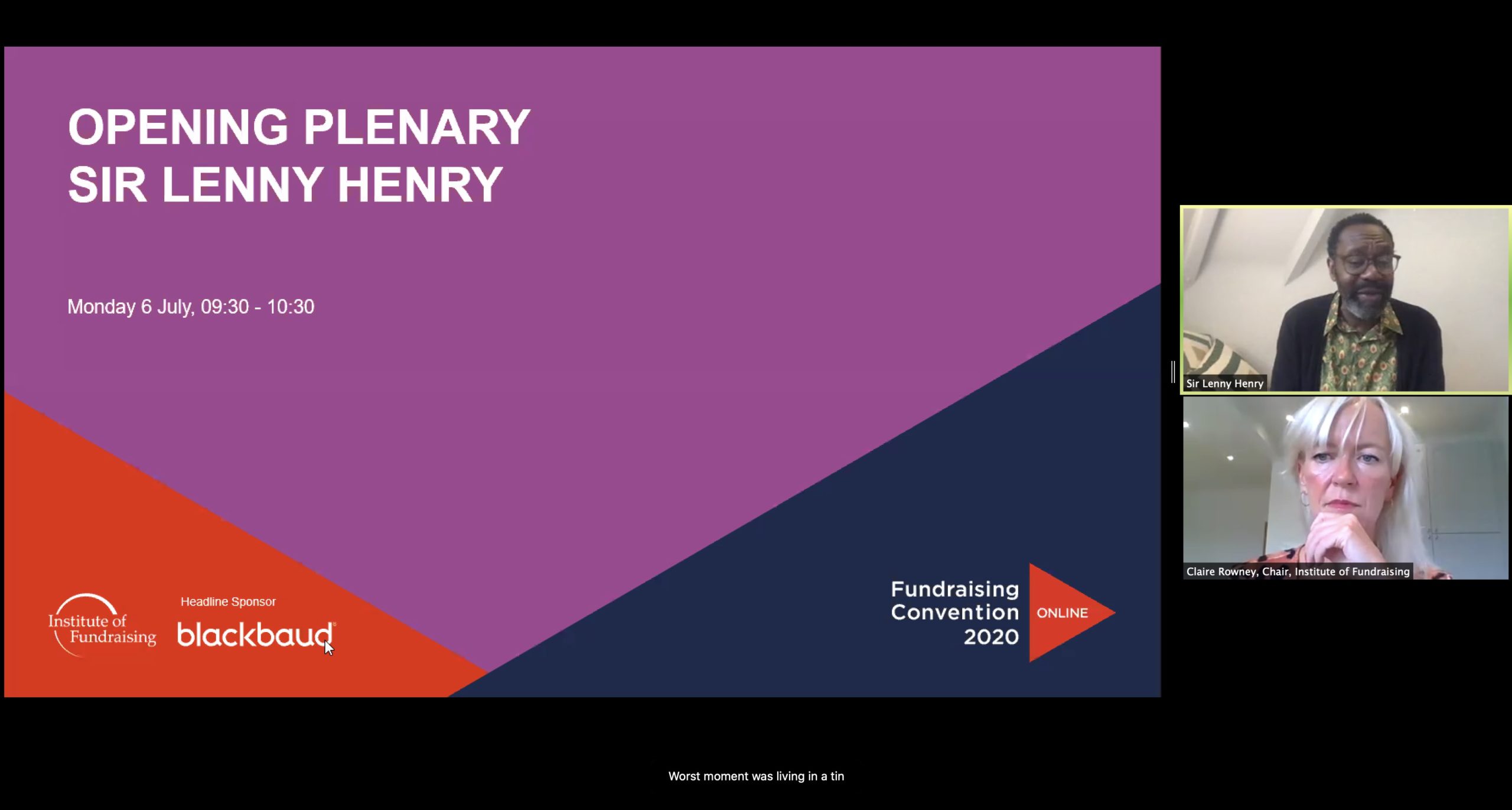 Compassion fatigue “is a misnomer”

He also insisted that there was no compassion fatigue. Commenting on how people had showed support for neighbours, for NHS and care staff, and for people they didn’t know as COVID-19 took hold, he said: “I’m never going to stop believing in our capacities and our skills. We’re going to keep giving because it’s what we want to do!”
He added: “For me, at Comic Relief, the best moment was knowing the public was engaged”.
He accepted that Comic Relief had made mistakes, saying: “We haven’t always done everything as fast as we could. But we’re doing new things, donating by text, social media, we need to challenge ourselves and our technologies. Exploring new ways to bring an authentic voice to our beneficiaries, rather than a celebrity-led approach.”
He recognised that storytelling now should be in the hands and words of the people with whom Comic Relief was working, and not with celebrities acting as intermediaries. 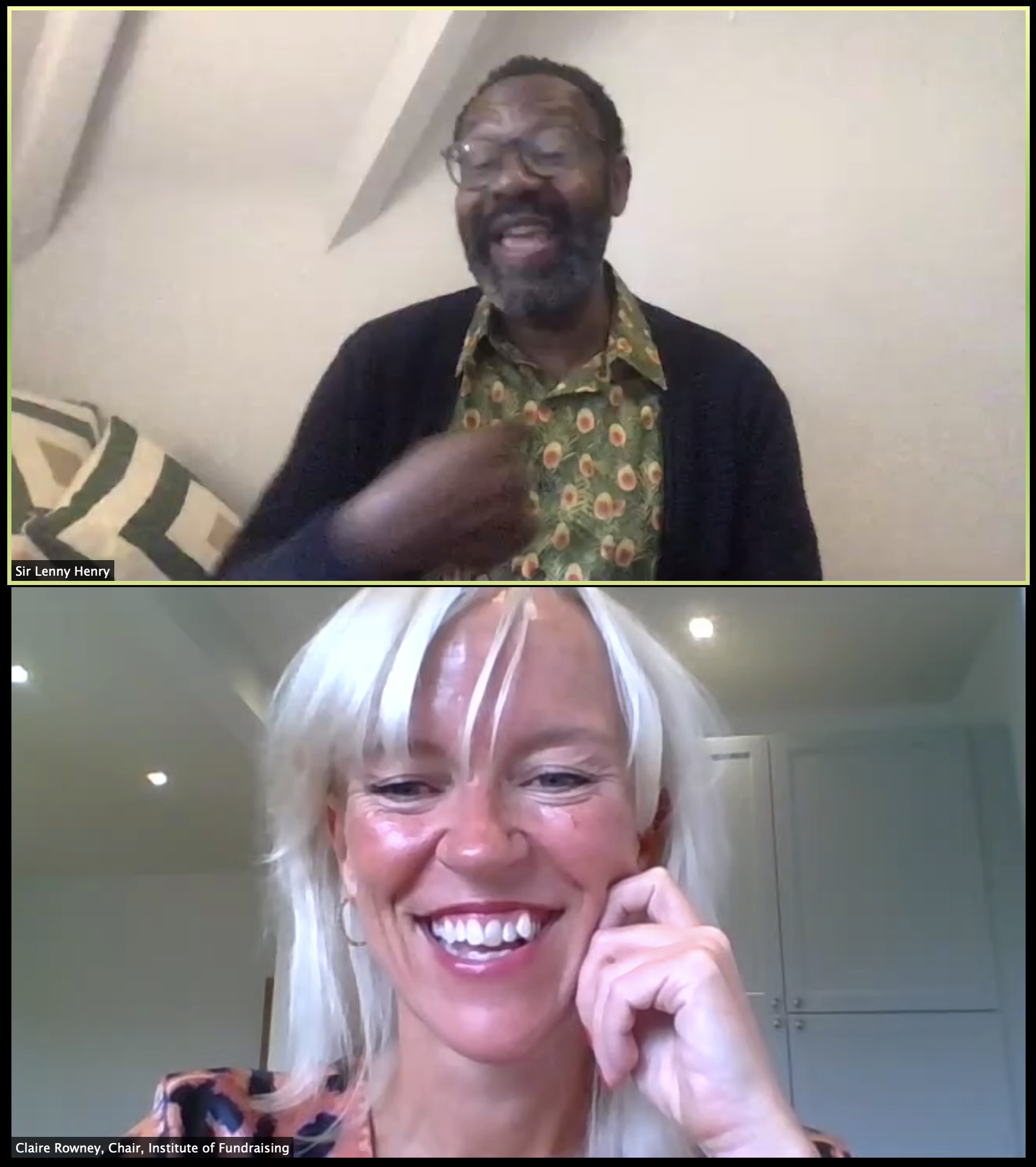 He was asked what he might do differently if he were setting up Comic Relief today. He answered: “Now, of course, you would make it more diverse immediately. That has happened over time. People are more educated and woke. You would start with the same energy. I would just make it more inclusive. It’s going to happen more and more, local people telling their own stories.”
He remained optimistic about people’s generosity, saying: “Young people especially are so engaged with giving. They’re going ‘I can do this. I can lend my voice to this’. We’ve seen that with Black Lives Matter and climate change. They’re going I can help, and I salute them for that. Even though they literally think I’m Idris Elba’s granddad. It’s their time.”
He saluted the work of all fundraisers for the work they undertake and what they achieve, concluding: “Thank you to all fundraisers – you all rock!”