The Big Give has announced its biggest fundraising target of £14 million for its matched giving campaign this year.
This consolidates its position as the UK’s largest online matched funding campaign, doubly so since the campaign runs for just one week in December – although participating charities and funders are at work on it for months beforehand.
Since it was founded in 2007, The Big Give has helped to raise over £113 million for UK-registered charities.

Once again the Big Give Christmas Challenge will make the most of the other major seasonal campaign of Giving Tuesday by launching on the same day, 3rd December. It will run for seven days until 10th December.
Throughout the week, participating charities will see supporters’ donations matched (up to a value of £25,000 per organisation), doubling the value of their gifts.
Last year, the campaign saw 589 charities take part, from small local organisations to large international charities. Donations totalled £6,195,035 with £5,644,520 match funds, plus a further £1,485,388 in Gift Aid, breaking records to raise over £13 million overall.
While each charity focuses at first on existing supporters, 94% of 2018’s charities reported that the Christmas Challenge had attracted new donors to their cause. In addition, 63% said that current supporters had given more than they usually would. And 89% of participating charities commented that the experience had boosted their confidence in online fundraising. 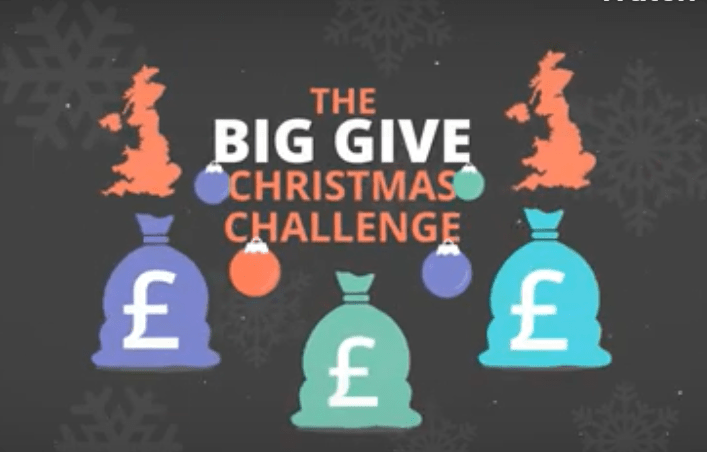 Apple Pay and CharityCheckout for 2019

This year’s campaign sees the option of donating by Apple Pay being made available for the first time, making it even easier for those who like to pay and give from their mobile. All the campaign’s payments are being handling by The Big Give’s processing partner CharityCheckout.
Almost half (48.7%) of UK smartphones are iPhones, according to Statcounter in September 2019.
CharityCheckout removes the need to visit a third-party fundraising website, letting supporters donate, fundraise and register for events directly from the charity’s own website. CharityCheckout supports charities in raising over £25 million each year and provides online fundraising products to over 3,000 organisations.
Jonathan Frank, Director of The Big Give, is confident that this option will help the Christmas Challenge hit its target.
He said: “Introducing Apple Pay through CharityCheckout will be a real boost for the charities we work with: it’s technology that reduces the friction of the giving process, making it easier than ever for people to support the causes they are passionate about.”
CharityCheckout’s Founder & CEO Chester Mojay-Sinclare added: “Apple Pay is fast growing in popularity as an easy and secure payment option for both donors and the charities they support”.

There are new funding Champions (the source of matched funding) taking part this year, including the National Lottery Heritage Fund. There are now over 20 funding Champions, including Reed Foundation, The Childhood Trust and Four Acre Trust.
Anne Young, Director of Strategy and Innovation at the National Lottery Heritage Fund, said: “This is the first year we’ve signed up as a partner, following a match-funding pilot we ran that shows there are not just financial benefits to this approach, but also great opportunities for the organisations taking part to form valuable partnerships, gain new supporters and volunteers, and expand their audiences.”