2017 sees the introduction of a new £1 coin in the UK. But there are other key dates regarding banknotes and coins – and opportunities for fundraisers – throughout the year.
We have already seen the introduction of a commemorative £5 coin featuring King Canute on 6 January, marking the 1,000th anniversary of his coronation. Here are some more commemorative and circulating coins due to be introduced in 2017, together with bank note developments.

The 12-sided bimetallic £1 coin is introduced, the first new £1 coin design in over 30 years. The Royal Mint claims it will be “the most secure coin in the world”.
Its introduction will have the benefit of reducing the number of fake £1 coins in circulation – and therefore likely to find their way into charity collection boxes and shop tills. Around one in 30 round pound coins is fake.
It was put on trial at the Trial of the Pyx on 30 January 2017. This is an annual quality assurance ceremony, first recorded in 1382. The trial was adjourned, as is the custom, until May when the Trial’s verdict is expected to approve it.
From 28 March, both the 12-sided and the current round pound will, for just over six months, be in use at the same time.
The Royal Mint has been producing 1.5 billion of the new coins since last year. Visitors to the secure building in Llantrisant in the last quarter of 2016 could watch them being minted.

Even more special to have coins made in Wales. Shows importance of the union #newpoundcoin With @AlunCairns @RoyalMintUK museum #PennyLane pic.twitter.com/DkyDDtkgcw

You could have designed the coin if you had successfully entered the Royal Mint’s design competition in 2014, the year that the new coin was announced and businesses were invited to prepare for its introduction. It was won by 15-year-old David Pearce with his design featuring the English rose, the Northern Irish shamrock, the Scottish thistle and the Welsh leek rising from a royal coronet.
Following the success of the #firstfiver and #fivergiver campaign, an idea from John Thompson that is reported to have raised £12.5 million, will your charity be inviting a donation of #newpoundcoin?

Want ideas of what to do with your old 'round pounds' when the new £1 coin comes in? We've got plenty! https://t.co/DVqPlDeEWS #quid4kids pic.twitter.com/zm9ZnM4Jqn

Great idea from @macmillancancer to make sure those old £1 coins are collected up! pic.twitter.com/uuW1mhDcbo

The £1 coin should have reached all banks and retailers.

The old paper (cloth actually) £5 notes, with prison reformer Elizabeth Fry on the reverse, cease to be legal tender and will not be accepted by retailers. Yes, that does mean the fiver will be withdrawn on the fifth day of the fifth note. Which is the day after 4th May (or ‘May the Fourth’ if you’re a Star Wars fan).
You can exchange one at face value in perpetuity by presenting it at the Bank of England, by post or in person.
Charity shops and other sector retailers might find the Bank of England’s downloadable poster about the Paper £5 withdrawal useful. 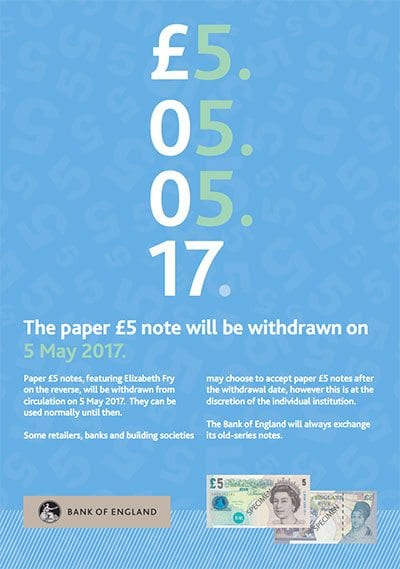 We’ve had #firstfiver, so why not ask supporters for their #finalfiver? This will become a little less straightforward from this date as the old notes will need to be separated and presented at the bank. It makes sense therefore to start appealing for these notes sooner rather than later.

Did you know your old £5 will stop being legal tender on May 5? Thank you Daisy for donating your #FinalFiver #LastFiver to @smhbasingstoke pic.twitter.com/MYni0W966g

A £5 commemorative coin will mark the 100th anniversary of the House of Windsor, when the Royal Family changed its name from Saxe-Coburg-Gotha.
https://www.facebook.com/theroyalmint/videos/1375471449194097/

In 2017, we celebrate an enduring romance with Jane Austen and her works: https://t.co/2ZGHIBZCAv #WorldBookDay pic.twitter.com/kIDxpA9nWK

Is this an opportunity to appeal for your #lasttwopoundcoin and #newtwopoundcoin?

An estimated half of all pound coins in operation will be the new £1 coin.

A 50p featuring Sir Isaac Newton will be introduced.

In 2017, we celebrate the life and work of Sir Isaac Newton. See the coins of 2017: https://t.co/jpWra79ZIS pic.twitter.com/miHi8zePsl

A new £10 polymer note featuring Jane Austen will be issued, one year after the first polymer note was issued by the Bank of England, the £5 note. They will both continue to be produced using tallow, an animal slaughter product.

If you focus on just one coin or banknote campaign this year, this is the one with the highest individual value. So, #lasttenner and #firstnewtenner might be in some charities’ plans.

The round £1 coin will be withdrawn. From this point retailers will not be obliged to accept them as payment. However, you can still take them to the bank to be exchanged.