For first time in the decades-long history of Greenpeace’s UK office, the charity has appointed joint Executive Directors. Greenpeace UK has appointed Areeba Hamid and Will McCallum to the roles with Hamid also the first woman and first person of colour to lead Greenpeace in the UK.

Hamid and McCallum will take over from interim Executive Director Pat Venditti in October.

Hamid is currently Global Finance Program Director at The Sunrise Project, a global network of changemakers focusing on ending all financial support for fossil fuels through building movements. She is also a board member of the Joint Council for the Welfare of Migrants.

Previously, Hamid has worked at senior levels in several Greenpeace offices around the world, campaigning to halt climate breakdown throughout her career including by supporting marine conservation, halting coal expansion in India and palm oil-driven rainforest destruction in Indonesia, and getting banks to end the financing of tar sands in Canada and North America. Born in India, she will be the first woman and first person of colour to lead Greenpeace in the UK.

As Head of Oceans at Greenpeace since 2015, McCallum has been leading a high profile international campaign to secure a Global Oceans Treaty and create ocean sanctuaries in international and national waters, including forcing the UK government to act on destructive fishing in Marine Protected Areas.

Before that, he oversaw the launch of the first major Greenpeace UK campaign on plastic, which helped reshape the global conversation about plastic waste. As an activist inside and outside of Greenpeace, he has campaigned on a range of issues including fracking, coal, oil sponsorship of the arts and equality. He wrote a book, How to Give Up Plastic, which was published by Penguin in 2018 and has since been translated into 12 languages. He is also on the board of Kaleidoscope Trust, an LGBT+ rights organisation.

“We’re really excited to have found such a dream team to lead the organisation. Areeba and Will are both smart, brave, dynamic campaigners with a fantastic track record of running campaigns that have made a real difference. They’ll bring their combined experience, skills and energy to one of the most challenging jobs in the environmental sector. As the impacts of the climate emergency escalate all around us, we need a new, compelling vision for how Greenpeace UK can achieve the change we so badly need – Areeba and Will have shown they have that vision. We wish them best of luck in their new roles.”

The chair of the board also thanked outgoing interim Executive Director Pat Venditti, who took over the reins from John Sauven earlier this year.

“It’s a great honour and a great responsibility to lead Greenpeace at such a crucial time. I have given so much of my life to this organisation and this now feels like the most important role I will ever take on. Time is short and hope can feel hard to summon, but the movement is filled with courageous people – inside and outside of Greenpeace – who inspire Will and I to feel that change is not only possible, but inevitable. We are filled with optimism and as a team we are determined to collaborate with everyone campaigning for a better world, helping to turn the strength of the environmental movement and society at large into the action we so desperately need.”

“I’m thrilled to be given the chance, alongside Areeba, to lead the best organisation I’ve ever worked for. The world right now can feel like a scary place, and we believe Greenpeace’s responsibility is to present solutions that cut through the doom and gloom and show that creating a green and peaceful world in which everyone can thrive is possible. Navigating the huge changes we are facing as a society, requires us to muster all the creativity and courage we’re capable of. We hope our joint leadership ushers in a new era of Greenpeace working collaboratively with all parts of the movement to bring about the world we need.

Coming soon! Internet fundraising articles in The Guardian and the Investor's Chronicle 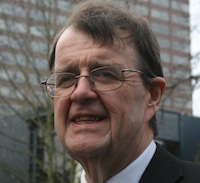