Gaming and livestreaming were already big before the pandemic struck but participation has really taken off with more people stuck at home, opening up the opportunities for charities.
Research commissioned by Make-A-Wish UK last year revealed that of 2,000 people questioned by YouGov, 40% said that someone in their household plays video games. Of those gaming households, 30% said they played for more than 10 hours a week before lockdown, rising to 50% during lockdown. And, 16% of gamers said they would donate to another gamer’s fundraising livestream or charity crowdfunding page.
The number of charities using gaming and livestreaming as ways to engage and fundraise is also steadily increasing.
Here are 6 examples of successful gaming for good and fundraising livestream campaigns, from the big to the small.

Jingle Jam, the world’s biggest games charity event, raised over £2m for good causes in a fortnight last year.
Taking place in December, Jingle Jam saw streamers across the globe raise funds for 12 charitable projects in both the UK and internationally. People could choose which of the 12 to donate to, including to The Grand Appeal for a new state-of-the-art facility at Bristol Children’s Hospital, The Mental Health Foundation to fund research to improve the wellbeing of gamers, and SpecialEffect to fund two new games with EyeGaze.
Jingle Jam asks participants to donate £25 or more to one of the projects via Tiltify to access the Jingle Jam 2020 Games Bundle of 35+ PC games and add-on content worth over £400 individually. This includes content for titles such as Among Us and Call Of Duty, as well as full titles including Starbound and Transistor. There are also official Jingle Jam livestreams, which can be followed at https://www.twitch.tv/yogscast.
Since launch in 2011, it has raised over $20m and sold 500,000 bundles. In the last two years alone it has seen 30 million views. 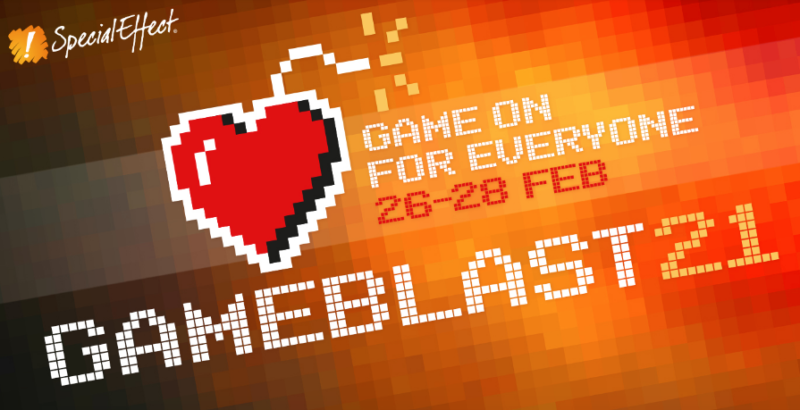 GameBlast is an annual event run in aid of SpecialEffect, and the UK’s biggest annual charity gaming marathon weekend. It asks people to play to raise funds to help it enable more gamers with physical disabilities to play the games they want to.
Taking place in February, it invites gamers to organise their own gaming event over the course of a weekend (this year: 26-28 February), whether it’s a marathon livestream, speed run, esports tournament or virtual pub quiz.
The marathon gaming weekend is live streamed via Twitch, and last year raised over £150,000 for the charity. 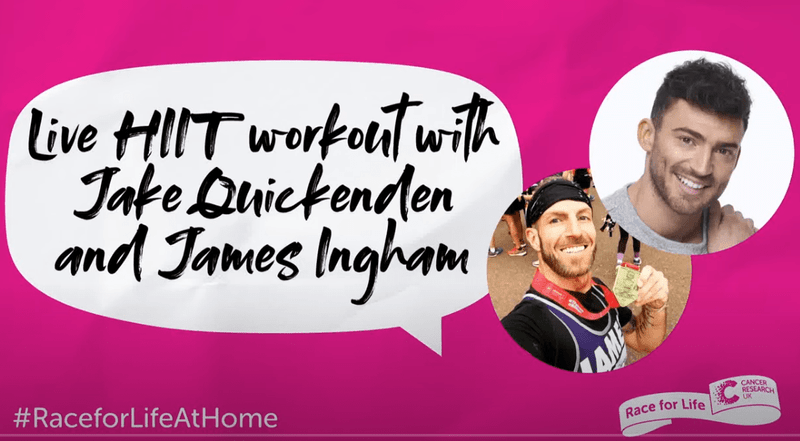 Due to the pandemic, Cancer Research UK’s Race for Life mass participation events were cancelled in 2020 with the charity running its first live streaming series for Race for Life instead, adapting its mass group events into live-streamed interactive campaigns.
Live streaming agency Groovy Gecko supported Cancer Research UK with its first ever Race for Life at Home Facebook live stream series, which streamed over several weeks in April and May. Celebrities including singer Jake Quickenden and TV presenter Chloe Madeley led livestreamed workouts with viewers able to submit questions and share personal experiences in a private pop-up box on-screen, moderated by the hosts.
These events were followed by Facebook Live event ‘A Very 2020 Race for Life’, hosted by TV presenter Alex Jones in September. 55,000 viewers tuned in to the Race for Life Facebook page to experience elements of an event day, including hearing from people affected by cancer, a minute’s silence to remember loved ones and a warm up routine. After the live stream participants were invited to set off on their own 5k in local parks and neighbourhoods.
By November, the Race for Life Facebook Live events had seen 280,000 total views and over 2,600 comments sent in. In total, Race for Life raised £2.8m, with Race for Life at Home raising £274,094 and a Very 2020 Race for Life raising £2,573,789. 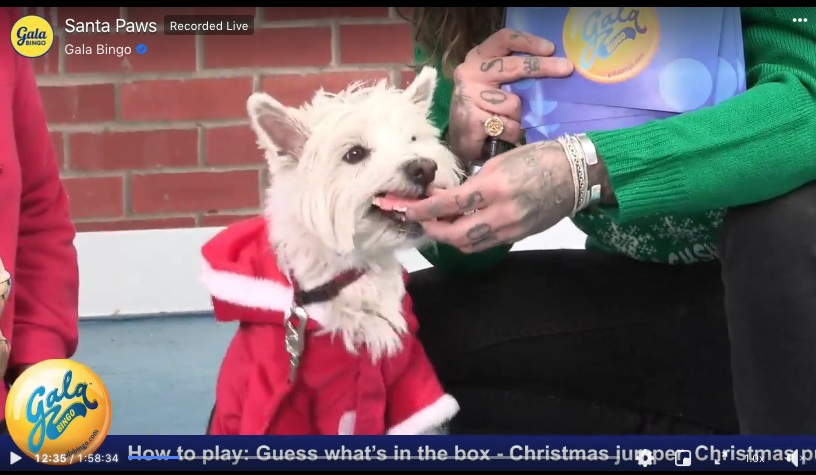 On a smaller scale but just as successful, last December saw over £6,500 raised for a Sheffield animal sanctuary through a Christmas charity livestream.
Gala Bingo teamed up with reality star and animal rights activist, Pete Wicks, for a festive charity livestream that raised funds for Thornberry Animal Sanctuary.
Gala Bingo research had revealed that two in five dog owners admit to having given up a dog in the past, with one in 25 of those who have given up dogs leaving them as strays. In response, the company joined forces with Thornberry Animal Sanctuary and TOWIE’s Pete Wicks, to host a Facebook livestream fundraiser at its Dinnington site on 13 December.
Streamed from Gala Bingo’s Facebook page, the event saw Wicks playing Christmas-themed games with the rescue dogs to raise money for the charity, as well as giving out prizes to viewers, such as Christmas hampers, restaurant vouchers and, for one watcher, a £500 shopping voucher.
Alongside the dogs, Pete was also joined by local star, Maria Wilds from Love Island, and the sanctuary’s volunteers who explained the importance of responsible dog ownership. The broadcast also featured a surprise visit from a pair of miniature ponies!
The two-hour livestream saw over 11,000 viewers and had a social reach exceeding 32,000 people. Over £6,500 was raised for the charity, £5,000 of which was donated by Gala Bingo. 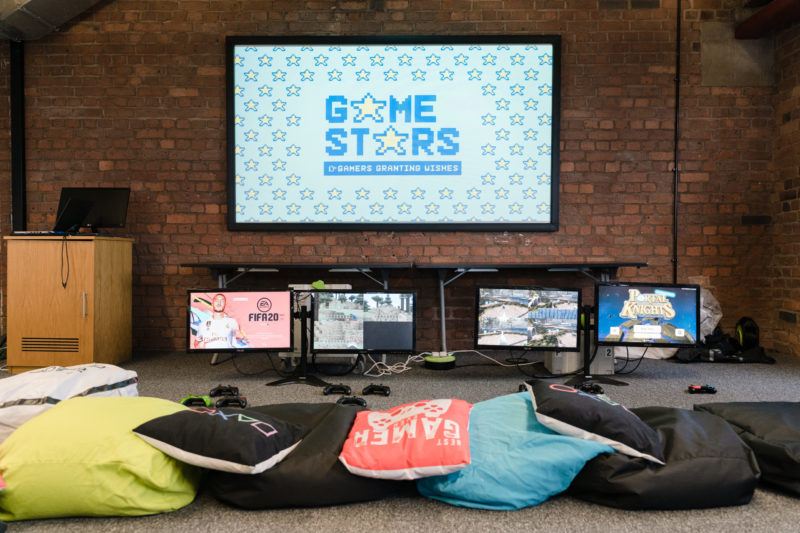 Make-A-Wish UK launched its ongoing GameStars a year ago in February 2020) and so far it’s raised enough money to grant around six Wishes.
The charity felt that its audiences would be particularly aligned to this fundraising mechanism because so many of the children and young people its supports have changed their wishes, due to Covid restrictions, and instead requested gaming equipment.
This was already a popular Wish but has come into its own because of the level playing field it creates amongst peers and the safe way it enables friends to have fun together despite lockdown.
GameStars simply asks people to game, either livestreamed, or with friends and family and raise funds for the charity, and the charity offers lots of support on its website to help people with the setting up of a fundraising page and a livestream, and with encouraging donations.
Make-A-Wish UK has seen engagement via livestreams and online fundraising pages from a range of audiences including Wish children themselves who chose to fundraise for it so that other seriously ill children can have a Wish.
The charity intends to keep developing the campaign.

With airshows around the world grounded last summer, this 4-hour livestream took place in June last year, and brought the thrill of flight to living rooms, raising enough money to enable 240 flights for people with disabilities.
Presenters of the Armchair Airshow included George Bacon, voice of many UK aviation events and display pilot, and Mike Ling – the Red Arrows’s longest serving pilot, and the livestream included previously unseen air display material, in-cockpit cameras and footage from a number of aircraft including a Spitfire and Concorde, pilot commentary, live pilot interviews including with Red Arrows pilots, and footage from NASA, USAF, The Blades, and The Red Arrows.
The event was free to view on the Aerobility YouTube channel and on Facebook Live. Viewers were invited to text to donate, and there was also an auction.

It's all in the name