Despite some Muslims in the UK being from the poorest social and economic communities, Muslim giving to charitable causes in the UK is estimated at over £500 million to £1 billion annually, with over £100 million of that given in the 30 days of Ramadan alone.
The generosity of the Muslim community has thus gathered an increasing amount of attention over the past few years, especially amongst fundraisers from ‘non-Muslim’ or ‘non-faith’ based charities looking to replace their traditional sources of income amongst an increasingly diverse population.
(I am using the term ‘non-Muslim’ charities to designate those charities that have not been specifically set up with an Islamic ethos or by Muslims as an extension of the their Islamic faith obligations. Of course both Muslim and non-Muslim charities do not distinguish themselves based on those they serve, as that in itself would be considered un-Islamic).

Discussions with non-Muslim charities often lead to the topic of Zakat, the obligatory tax/charity that every able Muslim should give from their savings above their expenses each year. Unlike other types of charity in Islam, Zakat is one of the five major pillars of the faith and thus like all the pillars, has very strict conditions on how it is calculated, collected and who it is distributed to. This has led to an increasing number of non-Muslim charities thinking that by simply publishing a Zakat policy on their website, backed by religious authority will cause Muslims to flock to their donation pages. For those that have tried, they will tell you, this is simply not the result.
Like any minority community in the West, engaging with the Muslim donor can be done at many levels that do not require non-Muslim organisations to prove how Islamic their organisations are. Our research with Muslim charities shows that less than 50% of their collected income is designated as Zakat, which means that potentially £500 million of non-Zakat donations are available every year for almost any good cause you can think of.

How better to engage with the Muslim community?

So, how can your organisation better engage with the Muslim community? Ensure your fundraising strategy invests in the following;
• Not every cause is for every donor. Similarly, you need to assess if the Muslim market is right fit for your cause. More specifically, not all Muslim communities are the same either, so do some research into which Muslim communities are likely to be attracted to your cause and where they are.
• Like any religious community, the levels of religiosity are different so don’t assume that by adopting Islamic/Muslim branding and personalities will bring in the donations. Be sensitive to the different cultures that exist within the same Muslim community.
• Don’t always ask for money. If you turn up to the mosque or only advertise in Ramadan then you are competing with when Muslim charities already do most of their fundraising for the year. Work on projects with local Muslim communities throughout the year so they are aware of you before you ask for donations.
• Your charity’s recruitment and diversity. It is especially hard to show you are serious about engaging with a community if they cannot see themselves represented in your work, especially if you are claiming to help others like them. There are a lot of other benefits to diversify but this will show you are serious about engagement.

Kashif Shabir is founder and principle consultant at Ethical Consulting Group, specialising in Strategy development, Governance and Faith Based Giving. In his recent role he was Director of a private fund investing in education and social welfare programs in Africa and Asia.
Previously he was Head of Knowledge Management and Learning at Oxfam and at the British Red Cross as part of the Strategic Change Management Team. Kashif has been consulting as an interim executive for a number of faith and non-faith based charities for over a decade. He holds a Masters degree in NGO Management from CASS Business School in London and lives in Berkshire with his family. 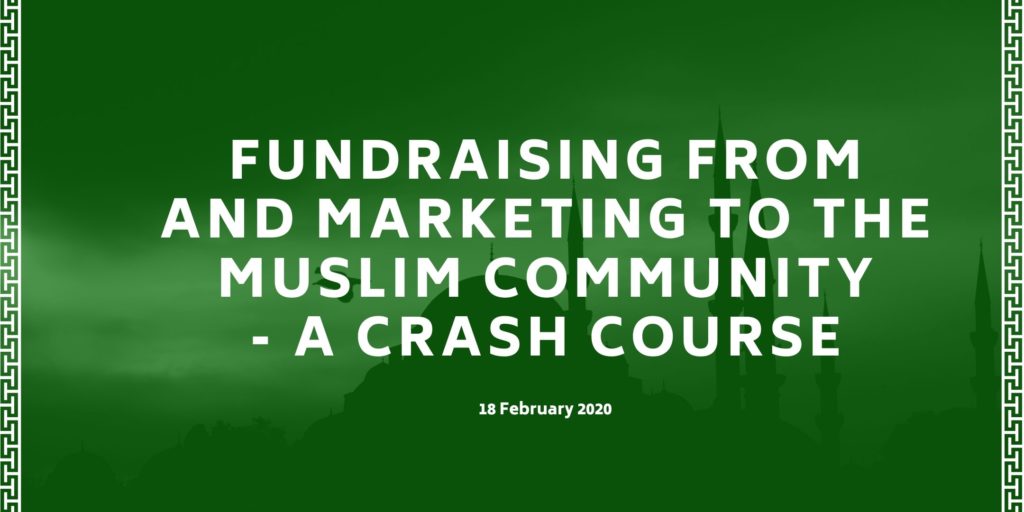 Kashif Shabir and Ikhlaq Hussain are again running their one-day course Fundraising from and marketing to the Muslim community – a crash course. It takes place in London on 18 February.