Here is a round up of some of the recent celebrity charity news, featuring a range of high-profile individuals, from royalty, to chefs, and singers supporting good causes through fundraising or other means. Lepra Broadcaster and former Blue Peter presenter Stuart Miles has become an Ambassador for Lepra. Miles is best known for presenting Blue Peter in the mid to late 90s and has a long affiliation with Lepra, going back to his hosting a segment for the show called “Leap for Lepra” which saw schoolchildren long-jumping to raise funds. This led to the charity being chosen for the 1996 Blue Peter Bring and Buy Appeal, which became one of the most successful appeals in the show’s history, raising £2.8m for the charity. Miles has been a major voice in Lepra’s latest appeal “£1 from you, we get two” which sees the first £50,000 raised in donations matched by pledge funding. As part of the appeal he has appeared in press and radio interviews for Lepra and promoted their work as part of the celebrations of Blue Peter’s 60th birthday.

Spent yesterday at the @GordonRamsay and Tara Ramsay Foundation, Velodrome Challenge and Dinner in Aid of @GOSHCharity

Most importantly over £220k was raised for a fantastic cause! ??

The Gordon and Tana Ramsay Foundation has now raised £1million for the Great Ormond Street Hospital Children’s Charity. Tana Ramsay was recently joined by a host of Olympic and Paralympic Gold cycling champions at a day of cycling at Lee Valley VeloPark to help raise money for the charity, with the event helping the Foundation reach the fundraising milestone. Dani Rowe MBE, Callum Skinner and Jody Cundy OBE shared expert tips and training with 20 teams taking part in The Velodrome Challenge, sponsored by Morgan Stanley and Freshfields, before taking part in a high-speed race around the iconic track. Food critic and MasterChef judge William Sitwell recently teamed up with Royal Voluntary Service on a campaign to champion the volunteers who run the charity’s lunch clubs and to inspire more people to follow their lead.   Central to the Cooking for a Crowd campaign is a tongue-in-cheek MasterChef style spoof film which follows Sitwell as he visits one of Royal Voluntary Service’s lunch clubs to review a home-cooked feast of shepherd’s pie and bread and butter pudding made by volunteer cook, Tricia. He has also helped compile a free e-cookbook, containing some of the favourite lunch club recipes from its volunteer cooks. 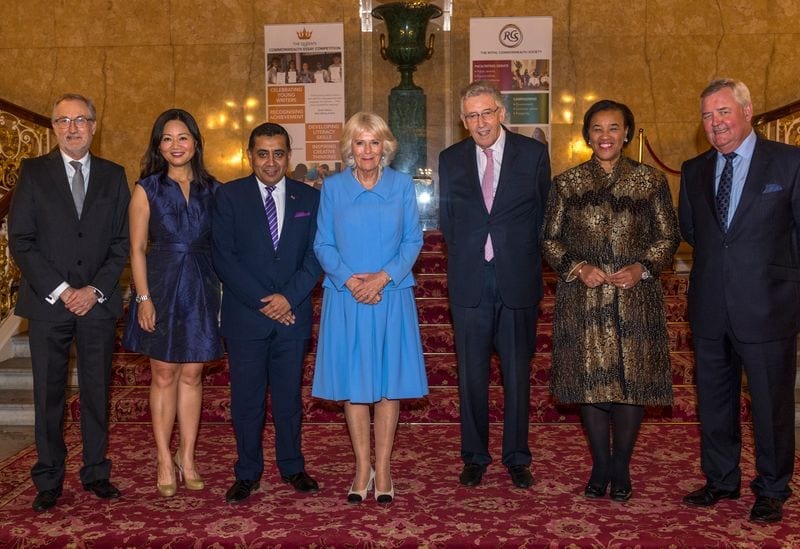 Her Royal Highness The Duchess of Cornwall became the Royal Commonwealth Society’s inaugural Vice-Patron last month, on its 150th anniversary. The appointment was announced at a reception at Lancaster House on occasion of the anniversary. This appointment builds on the relationship that The Duchess of Cornwall has had with the Society through her patronage of The Queen’s Commonwealth Essay Competition since 2014. The Competition is the world’s oldest international schools’ writing competition, founded in 1883 to promote literacy, self-expression and creativity amongst young people throughout the Commonwealth. 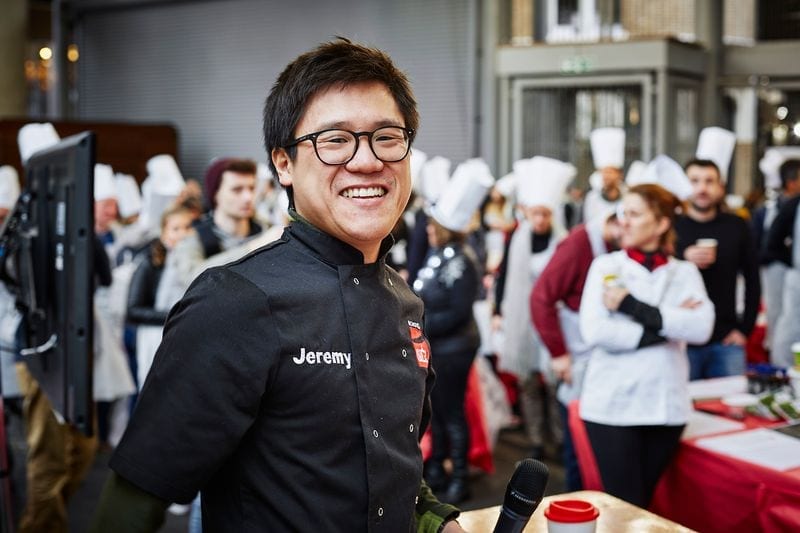 On 30 October Celebrity Chef Jeremy Pang and a team of helpers went to London’s Borough Market to make 4000 dumplings, 700 Hong Kong Noodle Stir Fries and 700 litres of Massaman curry in just 4 hours, for over 1000 people living within London’s homeless community and anyone facing food poverty. The event was in support of the ongoing work of charity Plan Zheroes and gathered surplus food from the Capital’s eateries. 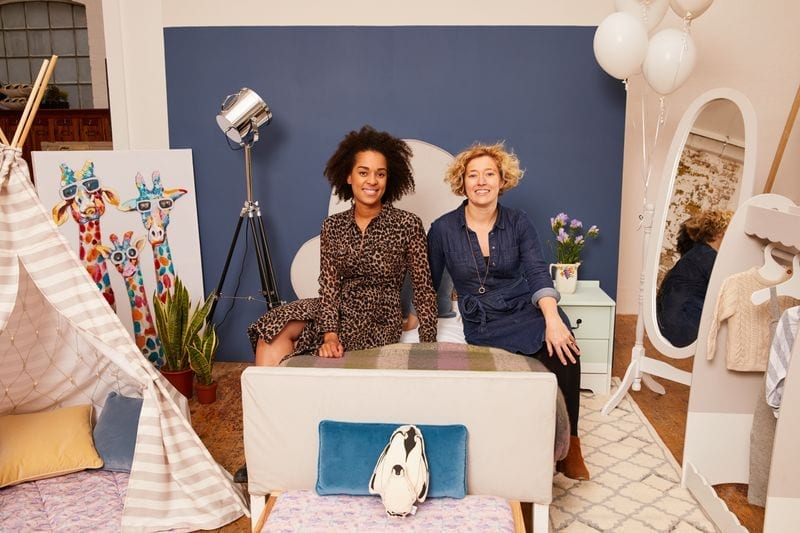 October saw four pairs of leading interior designers take on their biggest challenge yet – creating an entire room on a £500 budget, using only items they could find in their local British Heart Foundation store. Max McMurdo and assistant Phillip Ely, Interior Style Hunter’s Grant Pierrus and design pal Girl About House aka Sarah Mailer, Forward Features duo David White and Mark Russell and Sharp & Simpson’s Micaela Sharp and design partner Beth Clancy scoured their local British Heart Foundation furniture stores to find the best bargains to transform their spaces as part of the British Heart Foundation’s autumn Makeover Challenge where the BHF are encouraging the public to get creative and give their homes a fresh new look, using items bought at BHF stores. 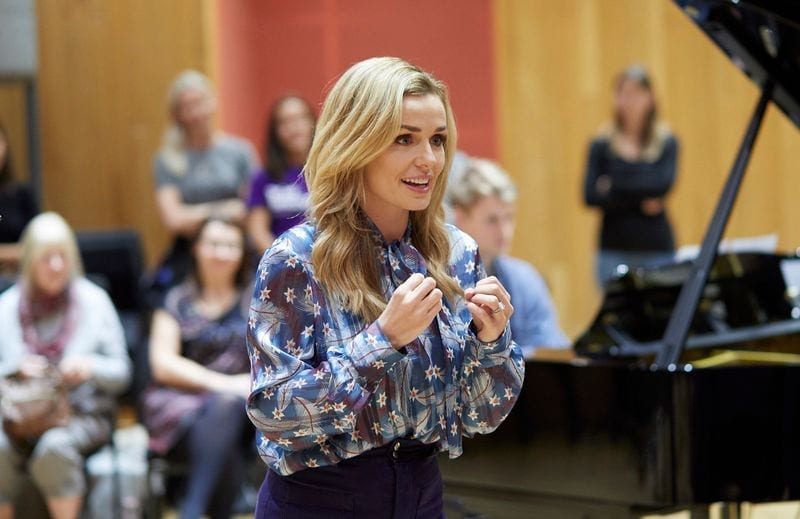 Katherine Jenkins OBE, patron of children’s bereavement charity Grief Encounter, has launched Children’s Grief Awareness Week 2018 with the online video release of track, ‘Jealous of The Angels’. Launching 15 November, the song, from her soon to be released album, ‘Guiding Light’, has been performed with the Grief Encounter Children’s Choir, featuring 14 bereaved children aged from 5-11 years old. From the 15-21 November, activities are taking place across the UK to mark the week, beginning with Forever Night to collectively remember loved ones. ‘Jealous of the Angels’ was launched on social media the same day, with a ‘donate’ button across all social platforms to give listeners a chance to donate directly to the charity.
Katherine Jenkins images credit: Jake Turney