Lloyds Banking Group today set out its commitment to supporting charities, promoting employee volunteering and raising funds for its charity partners. The pledges were listed in its 2017 Helping Britain Prosper Plan, in which it declares its aim to be “more than a bank”.
Lloyds Banking Group’s plan states that it will tackle social disadvantage through:

In 2016, the Group granted £18.5m in its independent charitable Foundations to tackle disadvantage. These supported 3,700 charities during that time.
In addition, the Group’s staff completed more than 260,000 hours of volunteering and raised £6.1 million for its Charity of the Year, BBC Children in Need.
This year it aims to encourage even more staff to volunteer their skills and experience, and has set a target of £4 million over two years as part of its new charity partnership with Mental Health UK, which is focusing on combining mental health and financial well-being. 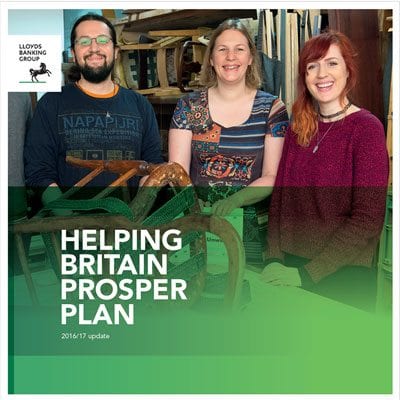 At the announcement of the 2017 Plan it was declared that “no other bank is better placed” to help tackle the socio-economic challenges facing Britain today. Lloyds Banking Group has approximately 25 million customers and one million small businesses; and its independent charitable Foundations work with thousands of charities across the UK.
António Horta-Osório, Chief Executive of Lloyds Banking Group said:

“The Helping Britain Prosper Plan captures the commitments we’re making to help the country economically and socially, which as a UK focused retail and commercial bank we are uniquely placed to do.”

Lloyds Banking Group staff can claim up to £1,000 per calendar year in matched giving from the Group for registered charities that meet the eligibility criteria.

FirstDirect to match fund donations to ChildLine to £50,000

As clocks go back, Rank Group staff use extra hour for fundraising for Carers Trust