The Daily Mail this week devoted a full page of its print edition to criticising the business model of online giving site JustGiving.
Under the headline “Website that rakes off £20 million a year from your charity donations”, journalists Paul Bentley and Tom Kelly presented an ‘exclusive’ critique of the pioneering website that has raised $4.2 billion for good causes from people in 165 countries.
There were no allegations of mismanagement, fraud, monopolistic practice, misuse of personal data, bad customer relations, or illegal or immoral practice. It was a ‘news’ report describing the business model of a commercial business that has been operating in that manner for the past 16 years. 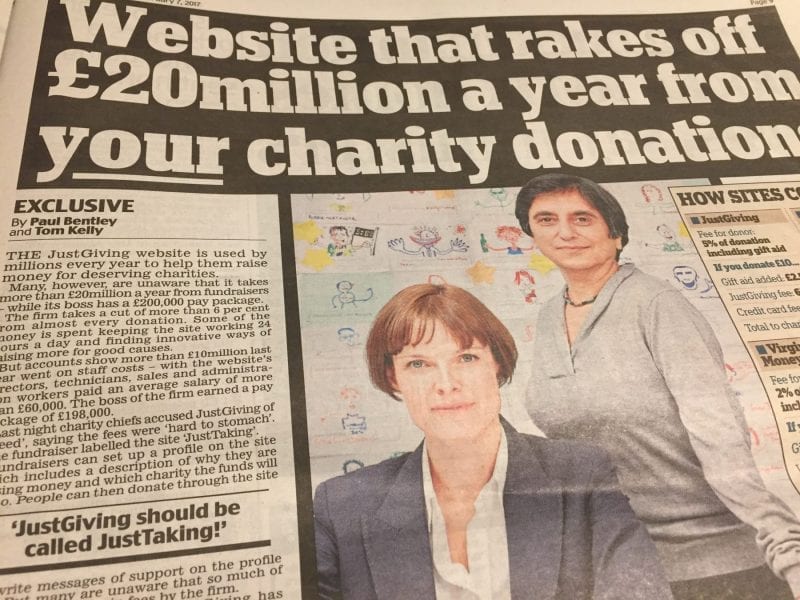 Charging or raking off for its professional services?

The article included a table of comparisons with JustGiving’s charges and those of competitor services. Under ‘How sites compare’ it compared the charging structure of each platform.
It didn’t feature:

Having featured the cost but not the value of each platform, the article applied another measure to JustGiving, previously used by The Daily Mail and others to query the effectiveness of charities, namely the annual salary of the Chief Executive.
It suggested that £152,000 a year (plus £46,600 of pension contributions) for managing a 120-staff major technology company that has transformed fundraising, generated several billion for charities, saved charities and individuals a great deal of time (do you remember collecting sponsorship on paper forms?), achieves an admirable Gift Aid reclaim rate, and inspired a slew of competitor platforms (some offering a subsidised and therefore, presumably more attractive, zero cost alternative) and other digital fundraising initiatives over 16 years was a waste of “your charity donations”.

The article argues that JustGiving “officially” says it takes 5 per cent from donations, implying that there is an ‘unofficial’ rate. It states “but the percentage is calculated after including a Gift Aid tax rebate, so the cut works out as more”.
This ‘unofficial’ and higher rate is explained thus:

The 6.3% ‘unofficial’ rate is not a real-world rate. A donation is either made with a Gift Aid declaration or without. JustGiving charges 5% on a standard donation and 5% on a larger donation (including Gift Aid).

Stephen Sutton appeal “made them thousands”

The article highlights the fact that JustGiving makes money from encouraging and enabling giving by focusing on one particular fundraising campaign.
Accompanied by a photo of him with his characteristic thumbs up sign,  the article reminds readers that Stephen Sutton raised £2.8 million through JustGiving following his diagnosis with terminal bowel cancer. He raised the money for Teenage Cancer Trust, with an original target of £10,000.
“JustGiving is believed to have taken about £100,000 in fees from the donations” report the journalists.
Of course, JustGiving charges fees for small and large campaigns. The large campaigns which attract publicity sometimes generate calls for JustGiving to waive its fees, despite the fact that without those fees it would not have been able to handle the large volume of donations rapidly and securely in the first place.
The article acknowledges that the site does occasionally choose to waive its fees, for example in the case of London Marathon runner Claire Squires who collapsed and died in 2012. In the case of Stephen Sutton’s campaign it did not waive fees but did make a donation of £50,000 to the campaign.

The Daily Mail features its report into JustGiving in its editorial under the headline “Stop just taking”. It is a reference to the article which quotes a fundraiser’s tweet last month claiming “JustGiving should be called JustTaking!”
It argues that “many will assume JustGiving is a charity itself”, an odd assumption for such a high profile and longstanding company used by millions of people. Most of the other online giving platforms are not run by charities.
It repeats the allegation that JustGiving takes “more than 6 per cent from most donations”. While it notes that JustGiving “claims the fees are ‘small'”, it concludes by suggesting:

“Any Mail readers planning their next charity fun run or bike ride may want to test that claim for themselves”.

Responses to the Mail’s story on JustGiving

This graphic in Daily Mail on how much more JustGiving takes from charity donations than other donor websites is disturbing pic.twitter.com/yQbnZNw3au

the positive impact of JustGiving to society is much, much bigger than these costs. As with all charities – think impact, not costs pic.twitter.com/ZdqgvPQdC9

Disturbing because it's misleading. What the article fails to mention is how much MORE money charities can raise because of site.

It really isn't @Peston, it's a fair price for a worthwhile & powerful fundraising tool that has raised billions. And it's used by the DM pic.twitter.com/Cnan5pMMll

Indeed, the volume of responses in support of JustGiving and charities’ needs to spend money to raise money was noticeable, certainly compared to other responses to newspaper criticisms of charities or fundraising over the past year or two.

We support @JustGiving :their service is excellent for donor & charity alike, and worth the small fees. Unjust criticism in today's press.

As a charity, the @JustGiving site is essential for us to raise money. Their innovation & support helps us raise more. Worth the small fee.

10 observations on today’s story in the Mail on online giving platforms, including @JustGiving (in who I have no vested interest) pic.twitter.com/XnCTnyqbT8

“More charities, fundraisers and, more recently, crowdfunders choose JustGiving than any other platform because they raise more, net of fees, than cheaper or free alternatives.

“Charities pay between 5 and 2% on gross donations, which is excellent value for money compared to standard (and much higher) fundraising costs involved in other methods.”

Significance of the Daily Mail’s criticism of JustGiving

The criticism provoked several articles which sought to query or explain the Daily Mail’s approach in context.

In an unrelated move, two days after the article on JustGiving was published, Wikipedia changed its advice to editors on using the Daily Mail as a reliable reference source.
https://twitter.com/JaspJackson/status/829431396439580676