Coca-Cola has opened its ‘Thank You’ Fund for 2014 which will provide €125,000 to voluntary and non-profit groups in Ireland.
Five grants totalling €125,000 are available for new sport and physical activity initiatives.
The Fund was launched by Irish Minister for Transport, Tourism and Sport, Leo Varadkar TD and Irish athlete Derval O’Rourke. Derval is this year’s ambassador for the Coca‑Cola Thank You Fund.

“This is a great initiative which aims to get people moving and help non-profit groups to stage physical activities,”

said Leo Varadkar.
Fund ambassador Derval O’Rourke urged her followers on Twitter to start thinking of projects and groups that needed the funding.

The Fund’s judging panel will include Lorraine Ho, Managing Director of Bootcamp Ireland; Tina Murphy, founder of Run with Tina; Denis Toomey, President, Cycling Ireland; and ‎Deirdre Garvey, CEO at The Wheel. Representatives from both of the Fund’s partner organisations Federation of Irish Sport, and the Northern Ireland Sports Forum, will also join the panel along with Erica Roseingrave of Coca‑Cola Hellenic Ireland.
“Now is the time to start thinking about what your organisation could do with our support to mobilise the people of Ireland and Northern Ireland towards greater levels of movement,” said Ailish Forde, Director, Public Affairs and Communications, Coca‑Cola HBC Ireland.
The Coca‑Cola Thank You Fund was launched in 2011 and has so far distributed €375,000 in grants. Applications will be accepted online until 16 June 2014. 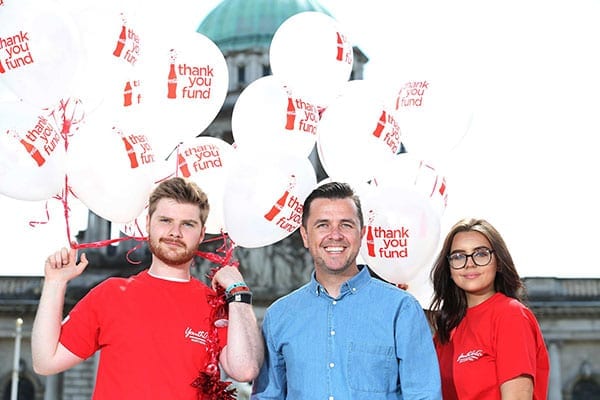