Pinterest is rapidly gaining attention as the current social media site du jour. Even though it is still in beta – in other words, you need an invitation from an existing user to gain access – it is reportedly growing faster than any other website has done, is attracting a higher proportion of women than other social media sites, and it is driving traffic and customers to commerce sites.

For these reasons and others I can suggest (it is visual rather than text based, and can be used as a curation tool), it is worthy of investigation by charities keen to spend a little time trying to understand what is currently grabbing attention online.

So, I thought it useful to take a snapshot of which UK charities and organisations have developed a Pinterest presence by mid February 2012. I was inspired to do so by Heather Mansfield’s post on Nonprofit Tech 2.0 11 Must-Follow Nonprofits on Pinterest, which naturally focuses on US nonprofits.

Most of those that I have contacted have acknowledged that they have no clear plan or objectives in using it, and you will see that their approaches vary, just by looking at the titles of the pin boards they choose. None seem to be using it yet for promoting products in their online shops, but expect that to change as they spot the volume of traffic that the site is meant to generate at present.

That’s certainly one of the ways I’ve been using Pinterest – to feature titles from our UK Fundraising Shop. And encouraging others to share these digital books’ covers via a Pin this! button. Note the diagonal price tag flash on some of our book cover images on the fundraising books board.

And I’ve not spotted any charity yet using the slicing hack I’ve just used to create added impact on one of my boards. Look for the head and shoulders photo of me.

Let us know below and explain how you are using it. We’ll close comments shortly to prevent this filling up with people posting links in a year or two’s time. This blog post is looking only at UK charities using Pinterest now, in February 2012. 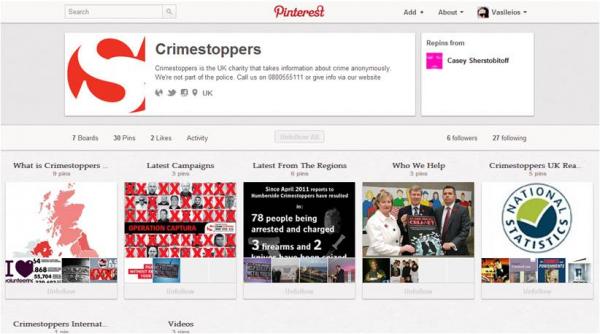 More UK Charities On Pinterest And Its evolving Use

Online fundraising and the Hype Cycle