ARSENAL star Theo Walcott is promoting the 10th John Smith’s Mascot Grand National which will be run at Huntingdon Racecourse this autumn.
Theo is involved as an ambassador for the event’s official charity – the Willow Foundation which provides special days for seriously ill 16 to 40 year olds.
The England international took time out of his training schedule to be pictured with Hugo The Hound, Gunnersaurus and Sedge The Field Mouse who will be among the competitors in this year’s race on Sunday 5 October.
With the race reaching its 10th anniversary, the Cambridgeshire racecourse is aiming to attract more than 100 mascots to take part in the madcap event which gains a worldwide television and online audience for the crazy antics of the
participants.
The Willow Foundation, founded by former Arsenal goalkeeper Bob Wilson OBE and his wife Megs after their daughter died of cancer aged 31, will be the beneficiary of fund raising around the John Smith’s Mascot Grand National.
Theo Walcott said: “The Willow Foundation helps people my age so what they do really means something to me. The Arsenal connection and the opportunity to work with a legend like Bob Wilson make it extra special. I’m pleased to be helping make more special days possible.”
The Mascot Grand National – sponsored by John Smith’s, the sponsors of the actual Grand National – is the highlight of every year for Britain’s mascots.
Mascots the length and breadth of the country step up their training as they prepare for the big day.
It’s a hilarious occasion when upwards of 70 mascots run, walk, stagger and stumble over obstacles on a gruelling one-furlong – 220 yards – course.
There’s been mayhem, controversy, accusations of gamesmanship, and claims of ‘ringers’ over the years since this madcap race began in 1999, but strict rules now ensure good clean fun.
Sophie Hodgkinson, managing director of Huntingdon Racecourse, said: “The John Smith’s Mascot Grand National has grown in size and popularity year after year. We’re targeting 100 runners this year for the 10th running of the race.”
The John Smith’s Mascot Grand National kicks off an afternoon of jump racing at the Cambridgeshire racecourse.
MASCOT GRAND NATIONAL HISTORY
1999: The Mascot Grand National was born as 17 mascots took part in one of the most unusual sights ever seen on a racecourse. Beau Brummie Bulldog, of Birmingham City FC, won.
2000: Word spread, and 49 mascots lined up, with Watford FC’s Harry the Hornet stinging the bookmakers in a flying finish.
2001: Controversy as Freddie the Fox was first past the post, but turned out to be an Olympic athlete. Uproar ensued, and Dazzler the Lion (Rushden & Diamonds FC) roared as he was proclaimed the new winner.
2002: Chaddy the Owl (Oldham Athletic FC) flew to victory amidst claims that he was another ‘ringer’. The accusations were unfounded – it had been Chaddy’s vigorous training routine that enabled him to wing it.
2003: For the second year Chaddy the Owl was crowned victor, but only after several rivals were distracted by a female streaker. An attempted £10,000 betting coup using a Commonwealth Games gold medallist as Sedge the Field Mouse failed when one of the rodent’s feet fell off.
2004: The year of Graham the Gorilla, the mascot of local football club Finedon Volta FC, who sent the crowd bananas.
2005: The bookies expected Chaddy and Graham to dominate, but the Sun newspaper’s Scoop 6 Squirrel drove everyone nuts with a stunning turn of foot.
2006: Football charity Kick 4 Life’s mascot Mickey The Monkey proved he was the business despite an attempted ‘rugby’ tackle on him in the closing stages. Sammy Saint was second for the second year.
2007: Wacky Macky Bear saw off the 2006 winner Mickey the Monkey to win for Saffron Walden FC on his Grand National debut.
RACECOURSE ADMISSION DETAILS
Admission on Sunday 5 October: Main Enclosure £15; Picnic Enclosure £8. Accompanied children under 16 – free.
Parking: Free.
Times: Gates open at 12.10pm. John Smith’s Mascot Grand National at 1.10pm. First horse race 2.10pm.
Contact information: telephone 01480 453373 or email [email protected]
Web sites:
www.huntingdon-racecourse.co.uk
www.themascotgrandnational.co.uk
www.johnsmiths.co.uk
www.willowfoundation.org.uk 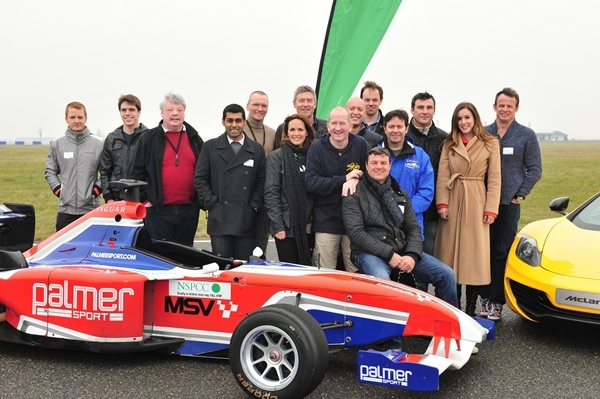 Celebrities take to the track to help raise almost £100,000 for the NSPCC

Chance to feature in next James Bond novel raises £30,000 for London’s Air Ambulance