Here is news of six events – past, present and future, from Mind’s 27 27 Challenge, taking place this month, to The Gurkha Welfare Trust’s Doko challenge, which will run in May and June.

Are you ready to get up and go ORANGE? ?

Getting involved with our flagship fundraising event – Orange April – has never been more important.

Just dress up (or down!) in your brightest orange attire and text to donate. Get your FREE fundraising pack ? https://t.co/JsG16S2nwU pic.twitter.com/nvfXvY9nhp

Every April West Midlands charity St Giles Hospice asks people to go orange wherever they are, whether it’s for a day, a week or even the entire month, and raise funds to help it continue providing its care. During Orange April, supporters are asked to text to donate £3, and can also request a fundraising pack, which has other orange-related ideas for supporting the charity.

It's happening! The Doko challenge is back this summer – taking place on 23 May in Cumbria and 6 June in London.

A 5km outdoor challenge styled on the Gurkha recruitment exercise.

Entry is just £25 and everyone is welcome. https://t.co/OC8ubzBC9g

Members of the public and the military are invited to take on the ‘Doko’ Challenge to test their stamina against the ‘bravest of the brave’ – the Gurkhas. The Gurkhas have fought in the British Army for over 200 years and their recruitment process remains one of the toughest in the world. Central to the recruitment tests is the Doko race – an uphill sprint in the Himalayan foothills with a weighted traditional Nepali Doko basket on your back. The Gurkha Welfare Trust is offering members of the public (and the military) the chance to see if they have what it takes to complete the challenge. Participants will race for 5km and have three choices for their Doko basket weight – 5kg, 10kg or 15kg, all of which are provided. The challenge is to finish within the 46 minutes that Gurkha recruits are required to. The UK fundraising races take place in the historic grounds of Greystoke Castle, Cumbria on Sunday 23 May and on Wimbledon Common, London on Sunday 6 June.

Pair up with a buddy and split the distance your way with RNIB's virtual marathon.

Whether you’re miles apart or side-by-side, make your pair and run, walk, jog or skip 26.2 miles between you this May.

RNIB has launched the 2021 event of its virtual fundraiser, Marathon Mates. The charity is calling on people to pair up with a friend, partner, housemate or family member and split the distance of a marathon (26.2 miles) during the month of May. Participants can choose to run, walk, jog or skip with their pair whether they’re side by side, or on the other side of the country. It’s free to sign up, with a suggested fundraising target of £150 per pair, the same amount it costs to support three people via RNIB’s Sight Loss Advice Service. 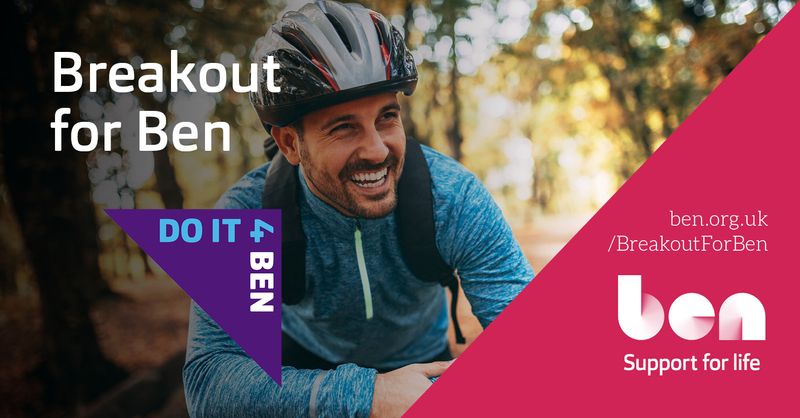 Automotive charity Ben has announced that its 10-day virtual active challenge, Breakout for Ben, has raised just under £159,000. Ben invited the whole automotive industry to Breakout for Ben in February and a total of 986 people took part. They walked, ran, cycled and exercised their way to complete over 80,000 miles collectively to raise funds for the charity. Teams embarked on a virtual journey visiting motor circuits across the UK, starting at Pembrey Circuit in north Wales and taking in all four home nations, before ending at Silverstone. Overall, just under £737,000 has now been raised to help address Ben’s £1million fundraising shortfall. All funds raised will help Ben support automotive industry people with their mental health, physical health and wellbeing.

Calling all students! This March we are challenging you to fundraise for Mind by running 27 miles in 27 days in solidarity with the 27% of us who report mental health problems whilst at university. It's free & simple, sign up at > https://t.co/St2a2ePMHz pic.twitter.com/7Vl97JdDMB

Mind’s 27 27 Challenge now has over 8,000 participants, who are on course to raise £1m + Gift Aid for the charity by the end of March. It challenges students to run 27 miles over 27 days and fundraise in solidarity with the 27% of students who report a mental health problem at university by getting people to donate or pledge donations for every mile tracked. The 27 27 Challenge switched to GivePenny for 2021, and is currently on £907,000 in donations, plus £63,000 earned of £100,000 pledged.

On Monday 1 March, Rays of Sunshine launched a virtual children’s art gallery displaying art created by the children and young people it supports. Each piece of artwork on display in the Rays of Sunshine Children’s Art Gallery has been produced by a child or young person currently living with a serious or life-limiting illness. Created alongside Moyosa Media, the gallery aims to celebrate the bond between Rays of Sunshine and its beneficiaries, in addition to recognising the charity’s patrons and supporters. Each child has depicted their own interpretation of the theme ‘sunshine, happiness and laughter’ and many of the pieces of art were created during group creative workshops with Rays of Sunshine. When viewing the gallery there is also an opportunity to donate.