The youngest generations of donors give the most overall to charity and plan to give more, according to a report from the Blackbaud Institute for Philanthropic Impact.
Gen Zers and Millennials gave £2.7 billion in the last 12 months. This is 30% of the overall total donated, according to The Next Generation of UK Giving report, which questioned 985 UK donors in February this year – although these two generations combined are more than twice the size of the Mature generation (born pre-1946), at over 17 million in the UK. 40% of people in these age groups (those born after 1981) also say they plan to increase the amount they give to charity in the next year – more than double any other generation.
However, the Mature and Baby Boomer generations are the generations with the highest proportion of people giving – at 68% of people in both age groups. They also contribute to the second highest number of charities, at over five charities per person. Matures contribute 22% of the total donated but 73% do not anticipate any change in the amount they give to charity in the next year.
In terms of preferred causes, the report found that all generations share a top three: health, children and animals. Matures are the only group to place animal causes slightly higher than children with older generations also more likely to prioritise giving to elderly causes.
The survey also asked participants how they thought they could have the greatest impact. It shows that the older generations are more likely to prioritise giving money with 49-51% of people in these age groups favouring this, while more Generation Zers and Millennials were the age groups that most favoured peer-to-peer fundraising (17%). Similar numbers of Gen Zers/Millennials, Gen Xers and Matures chose volunteering as their contribution of choice (13-15%).

How people prefer to make a difference

Acceptable ways for charities to ask for support were also examined in the survey, including direct mail, email, SMS, phone calls, cinema adverts, and TV/ radio programmes. Generation Zers and Millennials. Overall, the youngest generations are the most open to appeals via email (62%), SMS/text (56%), or social media (60%). However, 62% are also open to direct mail, while they are also particularly open to being asked to give via radio/TV programmes (73%) and cinema advertisements (70%).
The report also looks at online engagement and giving, finding that mosst Baby Boomers and Matures report minimal online contact with charities, while younger generations are also the most willing to give via a mobile device at 86% of Gen Zers and Millennials, compared to 33% of Boomers and 18% of Matures. 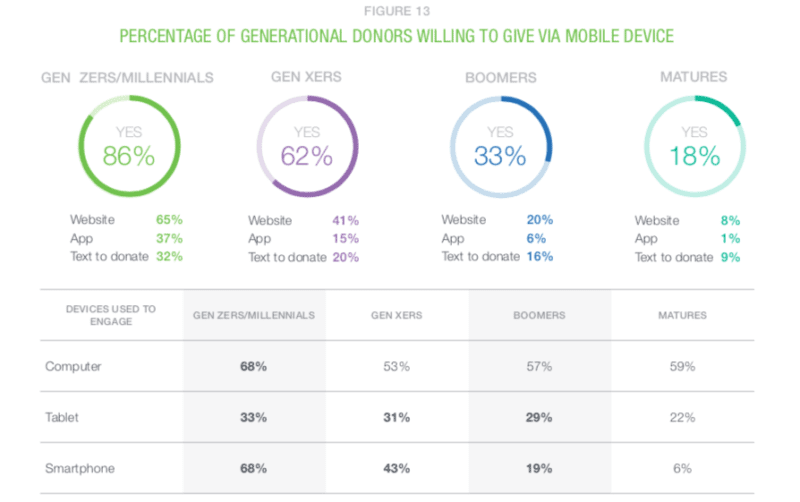 Percentage of each generation willing to give via mobile device

The report was commissioned by the Blackbaud Institute for Philanthropic Impact with Edge Research conducting an online survey of 985 UK donors in February this year. It is available from the Blackbaud site.