The Charity Commission has published its latest quarterly snapshot of charities registered in England and Wales as at 31 December 2017.
It confirms that the sector consists primarily of small and very small organisations, while the vast majority of the income is generated and received by a very small minority.
At the end of 2017 there were 168,237 charities in England and Wales listed on the Charity Commission’s register, the highest figure for 2017. In March the total was 167,023.

At the end of the year:
• 65,656 charities raised between £0 and £10,000 (39% of all charities on the register with financial details)
• 57,570 charities raised between £10,001 and £100,000 (34.2%)
• these smaller charities together received 3% of the total income received by all English and Welsh charities
• 2,250 charities each raised over £5 million
• these larger charities, representing 1.3% of all charities, received 72.2% of all the income raised by charities
The figures are based on the annual gross income reported by charities in their annual returns. The analysis above excludes the 11,247 charities (6.7% of those registered) for which the Commission does not yet hold current financial data. 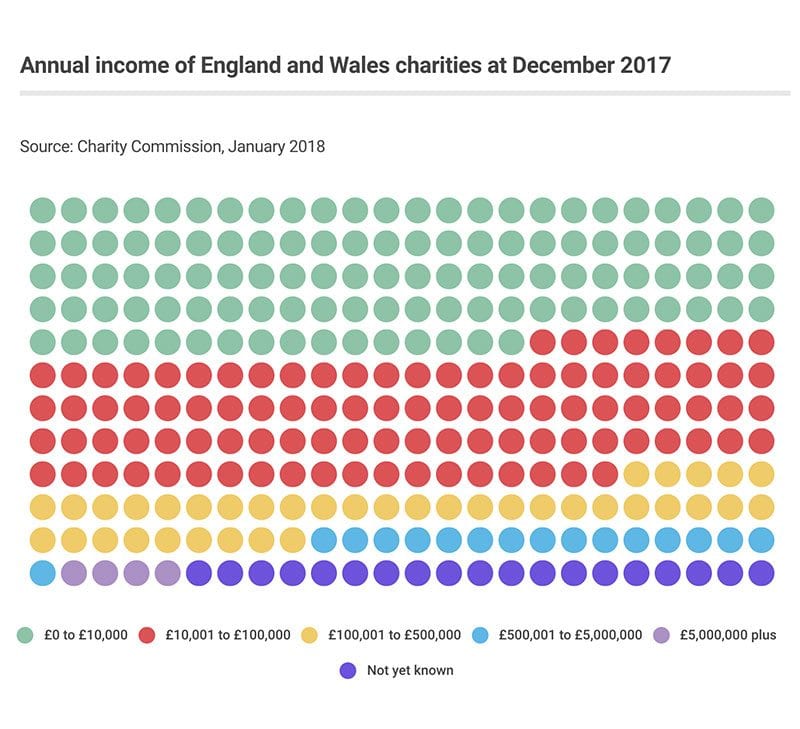 You can view the statistics from the Charity Commission. You can search the register of charities to view charity sector data graphically, by income size or main income source.