Fundraisers – get your red noses out! What Donors Want is back with a third episode featuring Adam Askew from Comic Relief.
For those who haven’t listened yet, What Donors Want is a podcast by I.G. Advisors, which offers a fresh, dynamic (and slightly irreverent) view into major gifts fundraising from the donor’s perspective. Each episode we interview a different kind of major donor and get right down to it: what do they actually want from the fundraisers who cultivate them. All of this and more – straight from the donor’s mouth.
Our previous episodes featured the Hewlett Foundation and Kiawah Trust, and now our third episode features Adam Askew, Head of Funding Partnerships at the red-nosed charity that really needs no introduction. Comic Relief is a household name in the UK and a growing presence in the US. And chances are if you’re a UK fundraiser, you’ve asked them for money, or even spoken directly to Adam, at one point or another.

Standing out from the written process

As a grantmaking organisation that raises its funds from the general public, Comic Relief has a rigorous, criteria-based, multi-step assessment process for all applicants. And it can be tricky to tackle, as interaction with a Programme Officer only comes after the first round of written proposals. So how can a fundraiser stand out from the written process and make it onto the shortlist in this context? 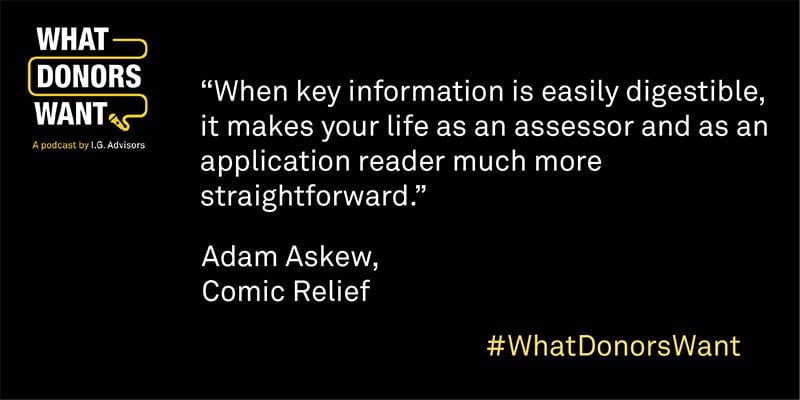 Behind the scenes at Comic Relief

We discuss this with Adam – along with what makes his job easiest, hardest, and the most common reasons Comic Relief doesn’t renew long-term commitments (after six years there, he has truly seen it all). You’ll also get a sense for their internal decision-making processes, including what you can do as a fundraiser to facilitate these, among much more.
As a funder, Comic Relief has struck a brilliant balance of rigorous criteria assessment, combined with intuition and cause-area expertise. And while their grant application process is nothing short of robust, Adam shares several invaluable insights on how to get your proposal to the top of their pile.
You can hear the entire conversation between me, I.G.’s Emily Collins-Ellis, and Adam Askew by subscribing to What Donors Want on iTunes.

What Donors Want – a podcast by I.G. Advisors – offers a behind-the-scenes view into major gifts fundraising from the donor’s perspective.