What Donors Want – a podcast by I.G. Advisors – offers a behind-the-scenes view into major gifts fundraising from the donor’s perspective.
After an incredible first foray into the world of podcasting, What Donors Want is back with a second episode.
For those of you who haven’t listened yet, What Donors Want is a podcast by I.G. Advisors, which offers a fresh, dynamic (and slightly irreverent) view into major gifts fundraising from the donor’s perspective. Each episode we interview a different kind of major donor and get right down to it: what do they actually want from the fundraisers who cultivate them. All of this and more – straight from the donor’s mouth.
Our first episode featured the brilliant Alfonsina Peñaloza, a Programme Officer at the Hewlett Foundation in California. And now our second episode features a dynamic philanthropic couple: Lynne and Peter Smitham who co-founded the Kiawah Trust in 2004.
Private trusts are tricky to tackle, as they rarely have transparent fundraising guidelines. Unlike large foundations, where you can quickly search grant history and relevant programme officers to connect with, cultivating a private trust requires meticulous network mapping and a highly bespoke approach.

Take Lynne and Peter for example. In our interview, they speak about the importance of a personal introduction, and how critical it is that the fundraiser approaching them deeply understands their personal and philanthropic interests.
They have seen it all. Peter, a 30-year financial services executive, has received proposals without a single number in them. Lynne has gone to meetings where the senior staff member doesn’t let the junior staff member speak (even though they have brought them along to the meeting). They’ve been to pitch meetings where there is no presentation and the fundraiser can’t articulate what the charity actually does. 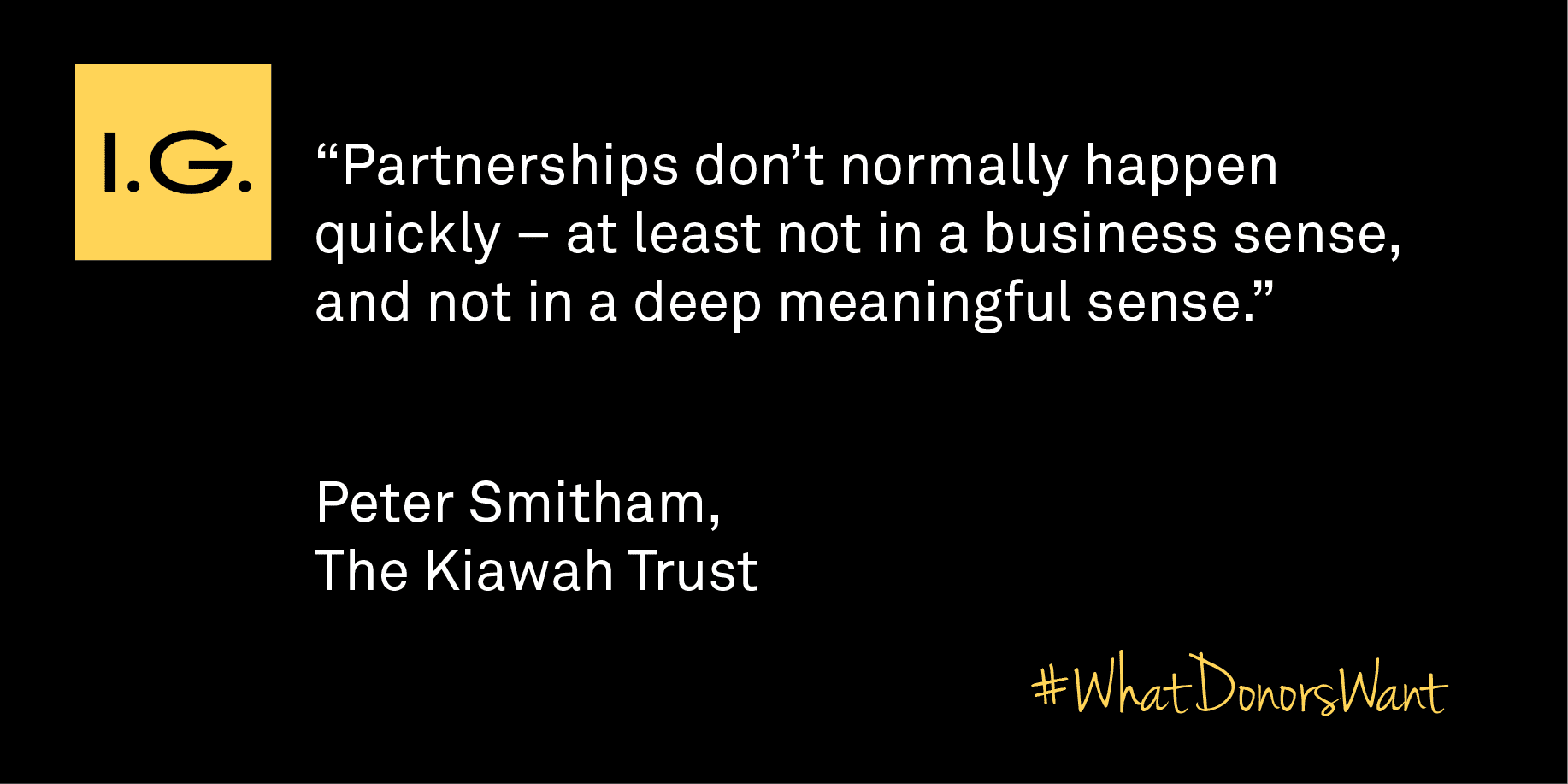 An unusual request from a funder

But they’ve also seen the best of it through their partnership with Dasra, one of India’s leading foundations focused on strategic philanthropy. Back in 2004, the Smithams made an unusual request, which was to fund an entirely new team and project within Dasra to focus exclusively and specifically on adolescent girls.
Recognising that supporting girls was the key to disrupting the poverty cycle, they launched this partnership through a $2 million unrestricted gift, which was leveraged as an anchor donation to raise tens of millions for girls and create what is now known as the Dasra Girls Alliance. How did Dasra manage to secure this level of robust, flexible support from Lynne and Peter for a completely new programme? Well – you’ll have to listen to find out. 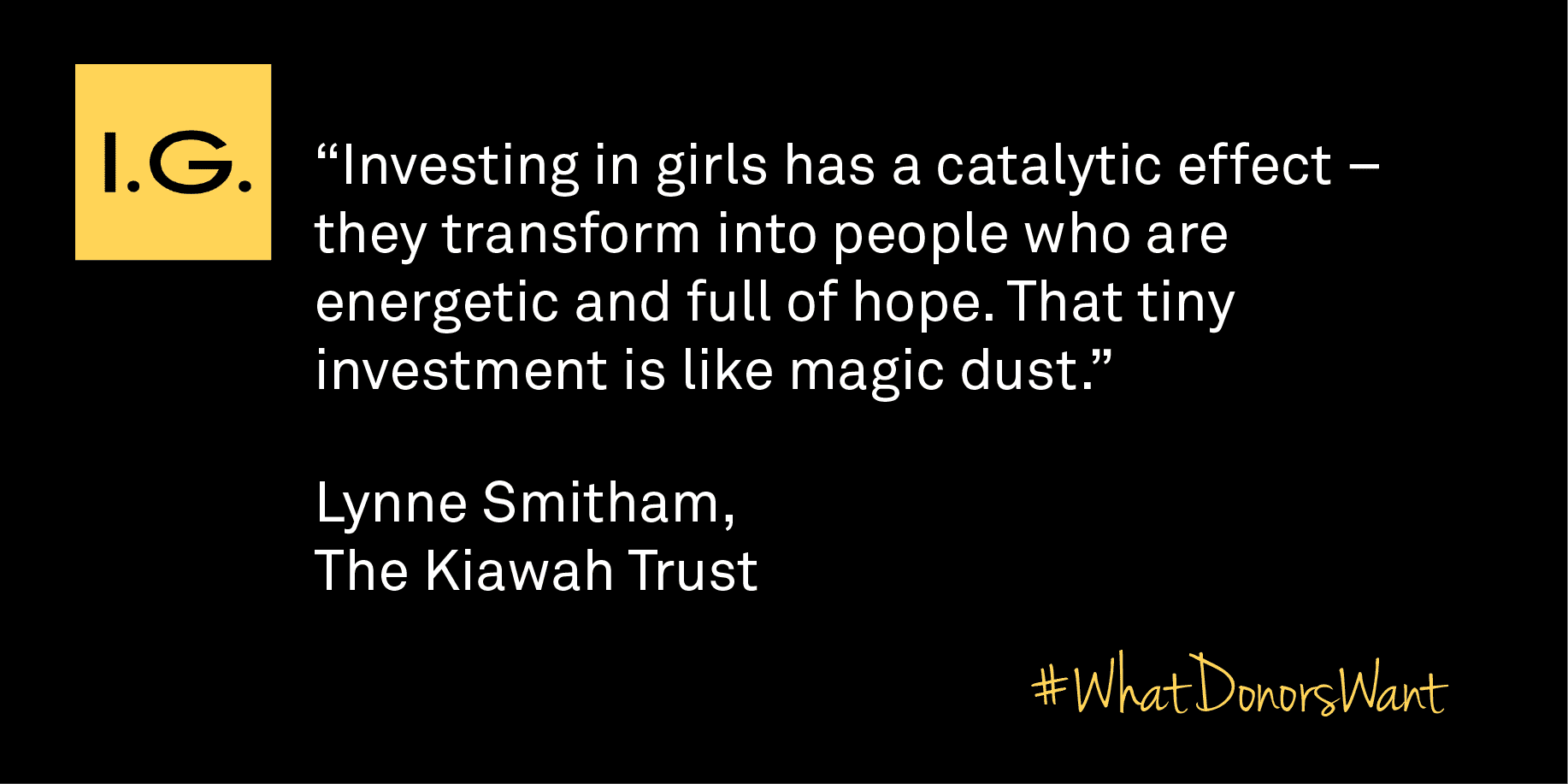 As funders, Lynne and Peter have struck a brilliant balance of being both hands-on and hands-off. They deeply engage in the cause and bring other partners to the table – but they also trust their partners to be the experts and spend the funds most effectively. It’s because of this fresh approach that they are featured as a best practice case study in our inaugural I.G. Insights report, The State of Funding for Girls, written by I.G.’s Managing Director, Alisha Miranda.
You can hear the entire conversation between me, Alisha, Lynne and Peter by subscribing to What Donors Want on iTunes. 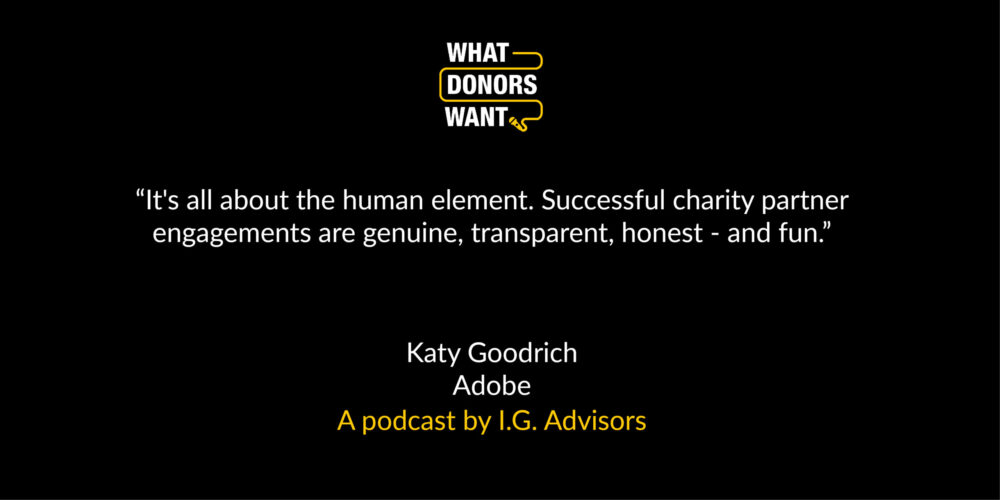