UK giving rose 2.8% overall in 2016, with online giving up by 2.2% according to the fifth consecutive Blackbaud Charitable Giving Report.
Blackbaud’s 2016 Charitable Giving Report analyses overall, mobile, and online giving trends from more than $23 billion of total fundraising revenue with overall giving data from 6,845 nonprofit organisations, and online giving data from 5,210 nonprofits representing over $2.6 billion in online fundraising from 2016. It includes figures for the US, Canada, and the UK. From the UK, it includes giving data from 342 organizations with over $675,000 in charitable giving.
The report reveals that compared to the previous year, overall giving increased by 1% last year while online giving rose by 7.9%. Online donations accounted for 7.2% of all fundraising revenue in 2016, while nearly 17% of online donations were made via mobile, up from 14% in 2015, and 9% in 2014.
The nonprofits in the report are classified by size and sub-sector based on NTEE code. K-12 education, and arts and culture nonprofit organisations saw the biggest increases in overall giving last year. K-12 education saw overall giving increase by 7.5%, while arts and culture saw a 3.7% year-on-year change, In terms of online giving, arts and culture, higher education, and public & society benefit saw the biggest increases at 15.4%, 12.3% and 12.3%.
Healthcare, public and society benefit, and environment / animal welfare saw decreases in overall giving, of -4.5%, -1.3% and -1.2% respectively, while online giving fell for international affairs (-0.8%) and medical research (-3.8%).
Overall, the most popular months for giving were December, which saw 21.8% of overall online giving donated during this month, followed by November at 9.7%, and September at 8.4%. 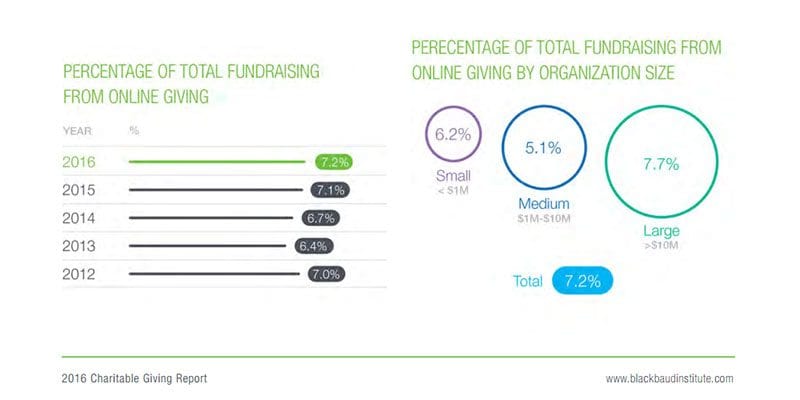 Blackbaud also produces a monthly update into donor trends. You can subscribe to the Blackbaud Index for free.