In the latest in our series examining in detail the fast.MAP and the Institute of Fundraising’s Fundraising Media DNA Report, we look at donors’ attitudes to door-to-door and street fundraising.

Who engages with Face-to-Face Fundraising? 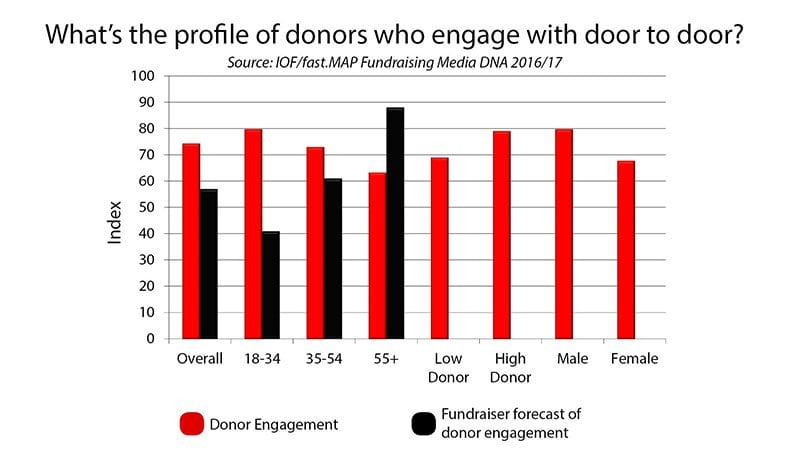 In contrast, Street Fundraising is most likely to engage an older audience (Engagement Index: 55+, 155). 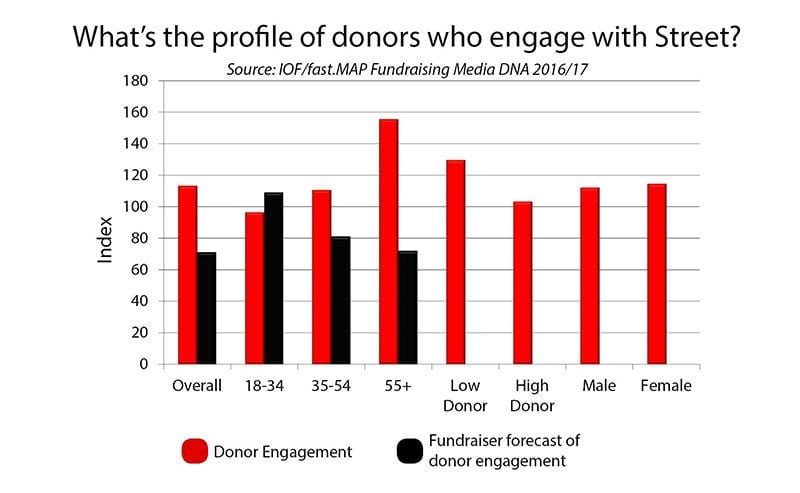 What is the personality of face-to-face fundraising? 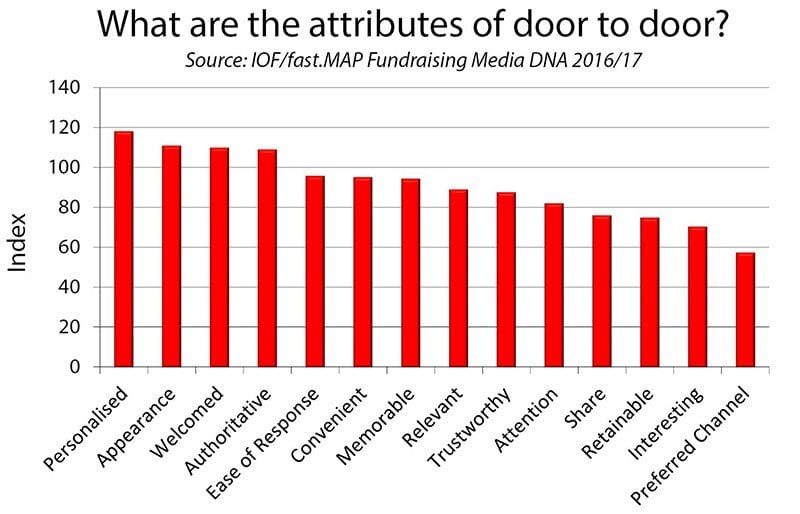 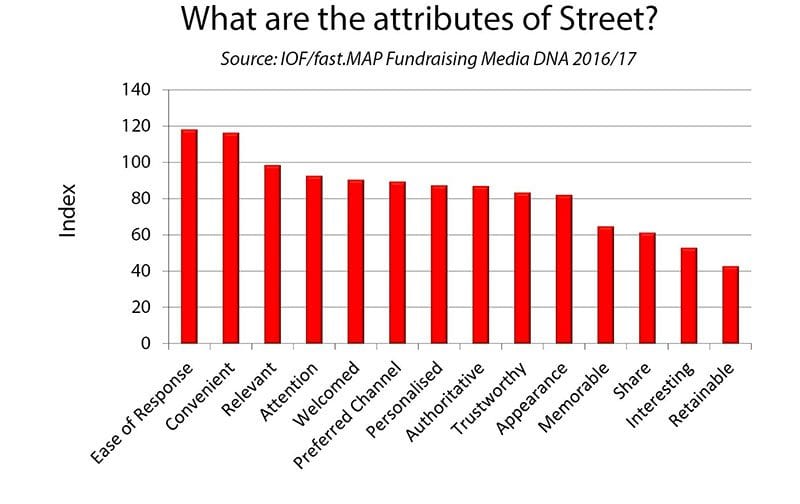 Street Fundraising’s strongest personality attribute is ease of response because it gives a face-to-face opportunity to ask questions and discuss the appeal directly with a fundraiser.
Unsurprisingly, alongside being easy to respond to, Street Fundraising is also rated highly as being convenient. Its conversational aspect appeals to the over-55s who feel it is relevant to them.

Last year, the Fundraising Media DNA research helped us identify which actions donors are likely to take, and through which channels. This year, we have year-on- year research, allowing us to compare donors’ behaviour from 2015 to 2016/17.
In 2015, both Door-to-Door and Street were amongst the top fundraising channels in driving immediate donations. This year, the most likely reaction to Door-to-Door fundraising is an immediate donation or response (Donate/Respond Now Index: Overall, 111), although, perhaps surprisingly, it has an above average ability to encourage information sharing (Share with Others Index: Overall, 102).
Fundraisers greatly underestimated this attribute (Share with Others Index: Overall, Estimated 68 vs. Actual 102) indicating that this could be an area which is ripe for development, for example, by providing printed information to leave with the householder.
This year, Street Fundraising’s main strength is its ability to generate immediate donations (Donate/Respond Now Index: Overall, 114) as would be expected in a face-to- face situation. Effective Street Fundraising relies on a good communicator delivering a strong pitch, backed by compelling case studies to generate an immediate donation. This is also true for the Door-to-Door channel. 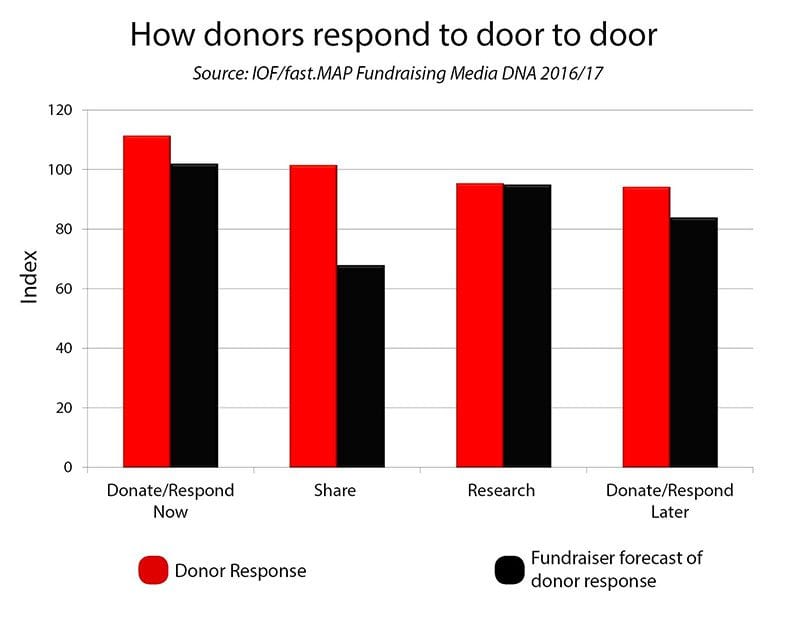 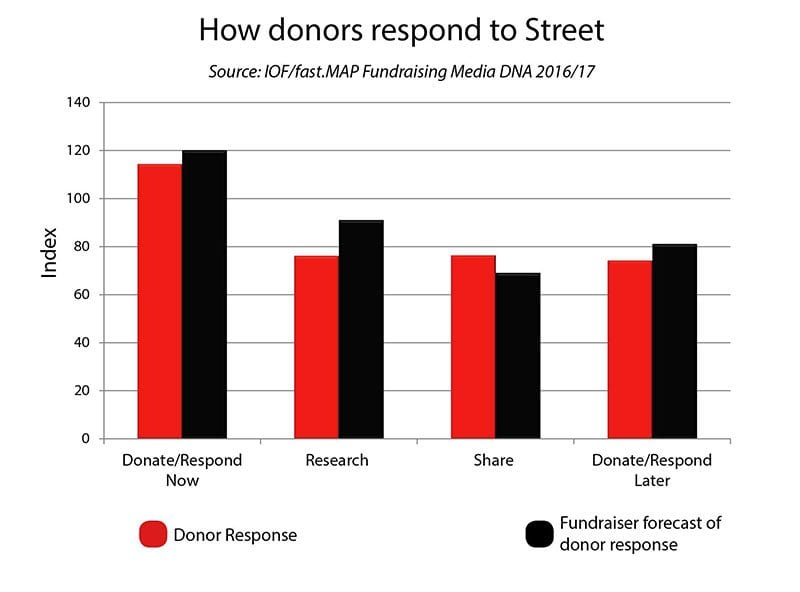 What do people say about face-to-face fundraising?

“Door-to-door continues to be viewed as positive and strong, remaining one of the most effective fundraising methods to reach and engage large numbers of individuals across the UK. The relevance of the channel is clear to charities, who have continued to utilise D2D to engage, sign up and grow their regular supporter base. The top line from the second year of results is that the majority of characteristics recorded have experienced a positive uplift (year on year), testament to the robustness of the channel.
“D2D, when done well, is a real human interaction and the engagement of the potential donor is an important element in determining its outcome. Successful engagements generate an immediate, memorable response, with the successful outcome for charities being a significant first stage commitment. The increase in the survey results for donate/respond immediately (was 104, now 111) is evidence of the sustainability of D2D going forward.”
David Mbaziira, Head of External Communications, Home Fundraising
“The fact that the most affluent age group of our society, the baby boom generation, shows such a willingness to engage with face to face, proves the need for a large-scale rethink on recruitment and strategy, especially where the size of operation is equally grand in scale.
“As a breeding ground for future fundraisers, it is vital that we begin to change the perceptions face-to-face fundraisers have of their audience. If a demographic of high quality donors is simply not being approached in the main, these bad habits must be broken.”
Sam Butler, National Fundraising Manager, St John’s Ambulance
“Great fundraising campaigns work when they inspire a connection between an individual and a cause. The value of a one on one conversation with a fundraiser in making that connection and talking about the value of a donation or other support is one of the most powerful and meaningful ways to establish a relationship. The power of a great conversation is reflected in the research showing that both door to door and street fundraising often leads to an immediate donation and response.”
Daniel Fluskey, Head of Policy and Research, Institute of Fundraising
“Fundraisers can sometimes overestimate the readiness with which supporters will donate or respond; some channels like door-to-door, can elicit a more immediate donation and response than others.
“The hard work of any marketing campaign must be supported by a website that reflects the nature and topics covered. People like to feel informed, and know that more information is available if they want it. If donors are so willing to research further and look into more details about campaigners, perhaps fundraisers should consider doing the same. Pre-testing campaigns and proposition ideas can help establish not just what works, but why people are so willing to engage with it. Perhaps this can help fill some of the gaps in a campaign, converting more prospects into donors.”
David Cole, Managing Director, fast.MAP

Fundraising campaigns can be tailored to be more efficient and effective for different age groups when assumptions and generalisations aren’t made, but instead, research is conducted.
To find out more about how people view and interact with different fundraising channels, download Fundraising Media DNA 2016/17 – free, (normally £50) with the following code: UKFU16.