What do donors think of different fundraising channels, and how do they respond to them? Which channels should fundraisers use for which type of donor?

These are some of the challenges explored and explained in Fundraising Media DNA, a new research project from the Institute of Fundraising and charity research specialist fast.MAP, the first wave of which was published last month.

Based on responses from nearly 3,000 donors and over 100 donors, Fundraising Media DNA looks at eight key communication channels used by fundraisers.

It has been produced “to revolutionise the way fundraisers select and use the most appropriate medium or media-mix to ensure their message is trusted and welcomed by donors and prospects in each target demographic group”.

The research is an annual tracker survey so fundraisers will be able to see how understanding on these issues changes and develops as donors’ attitudes and response change.

The report sets out a picture of how donors interact with these eight channels, the attributes that they associate with them, and indicates how they are likely to respond. It presents insight about the relative strengths and advantages of each channel.

In terms of each channel it examines levels of:

David Cole, MD of fast.MAP, acknowledged that many, particularly larger charities, undertake their own testing and research on their donors and scrutinise the results. He added:

“For some, particularly smaller charities, undertaking in-depth research is less feasible or practical. So we hope that this research can be both a useful addition for charities that have their own facts and figures, as well as a starting point for others”.

The initial research was presented at an event in London, and the Institute of Fundraising posted a printed copy of the report to 400 fundraising directors.

The publication of this research is timely given the current public debate about the fundraising techniques used by some charities generated following some media coverage of the death of poppy seller Olive Cooke and the resultant investigations and policy debates.

The initial report confirms that donors have widely differing views and expectations of different communication channels used by fundraisers and charities. For example:

Nuanced, not a simple ranking

Daniel Fluskey, Head of Policy and Research at the Institute of Fundraising, commented:

“This research is not intended and cannot be used to rank different forms of fundraising against each other. The results are unique to each channel and so direct comparisons should be avoided.
“Instead it aims to pick up on some of the nuances and less obvious aspects of donor engagement that can sometimes be lost if all that is looked at from a campaign is a donation response rate.”

The report closes with commentary from the Insight in Fundraising group:

“One interesting trend revealed by this research is fundraisers’ over-optimism in expecting immediate donations, when the tendency is for supporters to delay response, research the charity/ appeal further or share information with others.


“It is heartening to see further evidence of this kind of behaviour – our challenge now is to go out and quantify it!”

UK Fundraising plans to cover further detail of this report. 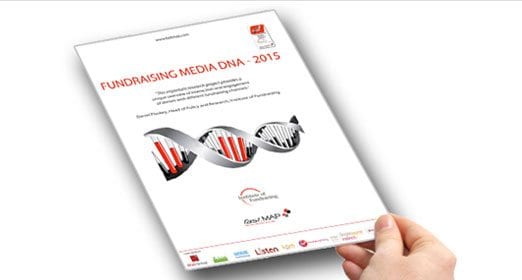 The Fundraising Media Report 2015 report can be downloaded in PDF.