Whether a charity is seeking to target a specific age group or a range of ages, they are due to benefit from understanding the attitudes and behaviours that different age groups exhibit towards fundraising channels.
To help charities acquire such an understanding, the Institute of Fundraising and fast.MAP recently launched Fundraising Media DNA 2016/17, which looks into how different age groups engage, perceive and respond to various fundraising channels.

Findings show that DRTV, direct mail and email are the top channels with which all of the studied age groups engage.
As expected by fundraisers, social media is also one of the channels that 18-34 year olds engage with the most (Engagement Index; 18-34, Actual 118 vs. Fundraisers’ expectation, 225). 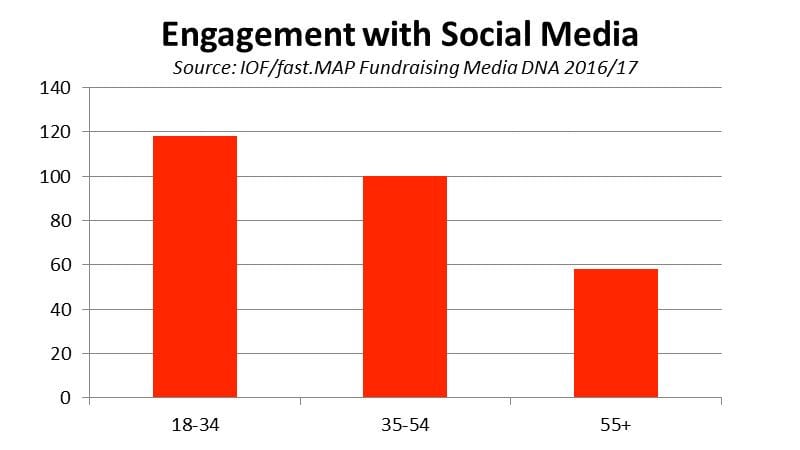 DRTV scores highly for many positive attributes across all age groups. Being ‘attention-grabbing’, ‘memorable’ and ‘attractive’ were the attributes for which it was ranked the highest across all ages.
Thus, DRTV seems like an ideal channel to use for charities that wish to appeal to both ends of the age spectrum.
35-54 year olds and 55+s also rank DRTV highly for being ‘interesting’ (Interesting Index; 35-54, 113; 55+, 145). 18-34 year olds do not seem to share this perception (Interesting Index; 18-44, 98). They find it more ‘authoritative’ (Authoritative Index; 18-34, 115 vs. 34-54, 106). This is interesting to know as it suggests that messages delivered via TV ads are likely to be respected, taken seriously and perhaps, obeyed by this age group.
This idea is supported with findings which show that 18-34 year olds are the mostly likely to donate or respond immediately to DRTV (Donate/Respond Now Index; 18-34, vs. 95 vs. 35-54, 89; 55+, 91). 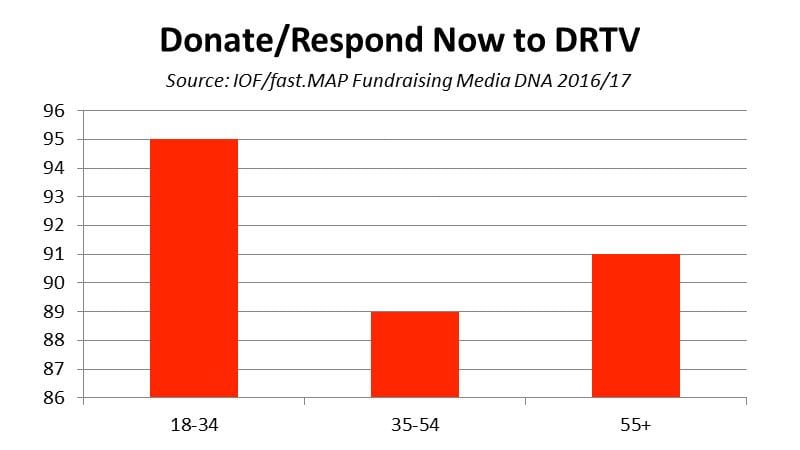 55+s, in particular, perceive email as being ‘easy to share’ (Easy to Share Index; 55+, 135 vs. 35-54, 114; 18-34, 106). This correlates with findings which reveal that they are also more likely to share as an action in response to receiving fundraising emails than younger age groups are (Share Index; 55+, 103 vs. 18-34, 99).
The most popular response to email amongst younger age groups is ‘researching further’ (Research Index; 18-34, 102). As research further is a strong response amongst this age group, it is important that fundraisers targeting 18-34s create and present opportunities to do so in their email campaigns.

“The findings from this research show that we should never take ‘accepted wisdom’ at face value. The response and engagement to different communication channels from people in different age groups is complex, and it’s important that fundraisers don’t fall into the trap of making assumptions.”
Daniel Fluskey, Head of Policy and Research, Institute of Fundraising

“More traditional media, such as direct mail, press and inserts, still play a key role in engaging a wide range of audiences, including younger donors as well as the over 55s. However, email is also seen as being welcomed by the over 55s and is developing a stronger preference for being one of donors’ preferred communication channels.”
David Cole, Managing Director, fast.MAP

“Direct mail scores highly with the over-55s as ‘my preferred way to hear from a charity’ which may be because many people find that direct mail is less intrusive than some other media. It also surprisingly scores highly with the 18 to 34 groups which may be due to ensuring the mailing is relevant to the recipient and considered to have ‘interesting content’. Understanding your existing and prospective donors and respecting their wishes is crucial to success.”
Claire Gingell, Marketing Manager, ONEPOST

Fundraising campaigns can be tailored to be more efficient and effective for different age groups when assumptions and generalisations aren’t made, but instead, research is conducted.
To find out more about how people view and interact with different fundraising channels, download Fundraising Media DNA 2016/17 – free (normally £50) with the following code: UKFU16.