The bad fundraising practices by some charities highlighted last year in media reports were the result of the failure of trustees to fulfil their responsibilities, according to today’s report by the Commons Public Administration and Constitutional Affairs Committee (PACAC).
The Committee emphasised that the new proposals contained in the Etherington report in September represent the “last chance” for the self-regulation of charity fundraising. If trustees do not improve how they monitor and set standards for their charities’ fundraising, then statutory regulation will follow.
The report focused primarily on the importance of good governance within charities, rather than on the techniques used by some fundraisers at some charities and some agencies.

The report argued that, while the Committee welcomed the Government’s full acceptance of the recommendations of the Etherington review, its proposals “do not go far enough”.
Moves towards greater transparency in annual reports about fundraising and stronger regulation were welcome, but what was required was “a change of attitudes and behaviour from trustees”.
PACAC’s report takes a wider view of the issues and problems:

“The Etherington review focussed on the regulatory and self-regulatory structures around fundraising, and less on improvements to governance and leadership, although Sir Stuart Etherington accepted that they had to be part of the solution”.

The report finds that trustees at the charities involved failed in their roles, and cited the acknowledgements of this by the charity CEOs who gave oral evidence to the Committee last year:

“Sir Alan Parker, Chair, Save the Children, told us that “it is clear from the Daily Mail’s investigation that we haven’t been doing enough to ensure that these [our charity’s] values are enforced in practice across all our activities”.” 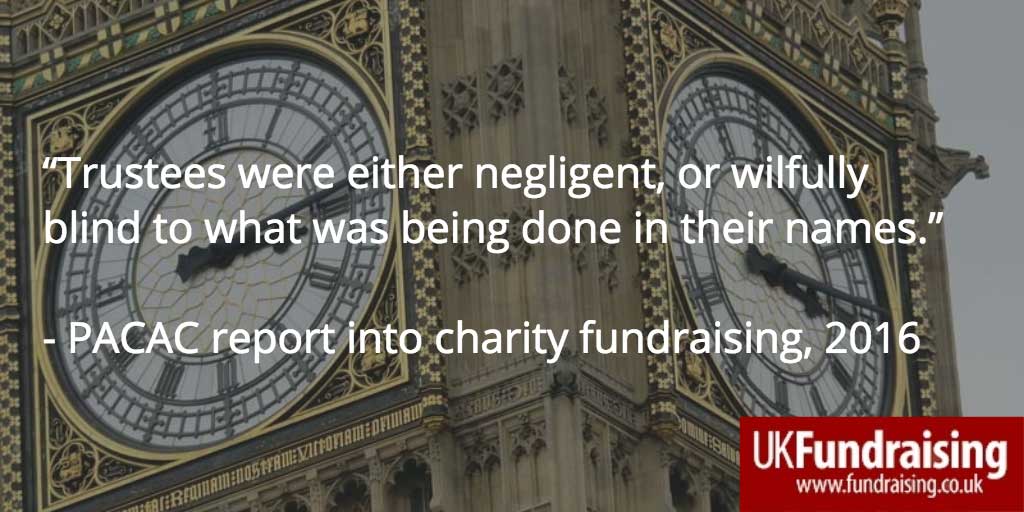 “Last summer’s controversies were evidence of a failure of governance by trustees. The evidence reported here suggests that there is still some reluctance on the part of many trustees to accept that this was not just a failure of process or an excusable oversight, but a failure of trustees to understand that their primary role is governance, which means their overriding responsibility is to sustain the mission and values of their charitable organisation. Managing reputational risk is central to this role, for without good reputation, no organisation can be effective. In this role they failed.
“Trustees are as responsible for the activities of any sub-contractors, as for any part of a charity’s operations. All the chief executives of the charities that gave oral evidence to us admitted that they did not scrutinise fundraising sub-contractors enough. The only possible conclusion is that, by failing in this responsibility, trustees were either negligent, or wilfully blind to what was being done in their names”.

The Committee did not suggest that the trustees’ failures were malicious. Indeed:

“The Direct Marketing Association told us that “the main problem is that some charities do not properly understand their obligations under current direct marketing regulation”.

The Committee drew attention to the what it described as the weaknesses of current fundraising self-regulation.
It found that the three regulators of fundraising “have not coordinated their work with each other”. Acknowledging that this had been a longstanding situation, it gave examples:

“The Fundraising Standards Board gave us a list of recommendations that they had made to the Institute for revisions of the code since September 2012. Of those recommendations, only 4 of the 13 made were accepted”.

“The Institute of Fundraising say that most of the issues discovered by the media relate to compliance with the code, rather than the code itself. The fact that the three regulators themselves disagree about this point underlines the failure of the system”.

The Committee noted that the membership element of self-regulatory bodies needed addressing, saying:

“We endorse Sir Stuart Etherington’s recommendation that the new regulator should be funded by a levy, rather than being a membership organisation”.

It also welcomed a stronger voice for donors in the self-regulation body.

It did not, however, specify whether that donor should be an individual (one-off or regular giver? charity shop customer?), a major donor or a corporate donor.
On communicating with vulnerable people, one of the key issues raised by last year’s exposés, the Committee did not go into much detail, beyond arguing that:

“The new regulator should set out best practice in this area and make it clear that trustees are responsible for ensuring their charities apply the code”.

“the new regulator should consult representative groups for vulnerable people to examine how they can update the code of practice on fundraising and ensure that vulnerable are not targeted by unscrupulous fundraisers”.

The Committee found that self-regulatory bodies to date had not achieved a sufficiently high public profile. For this reason it stated:

“The new regulator should take urgent steps to create a public profile, without which the new regulator will be unable to raise public trust and confidence in fundraising and the sector as a whole”.

No to fundraising preference service

One of the few areas in which the Committee departed from the Etherington review’s proposals was over the proposed fundraising preference service. 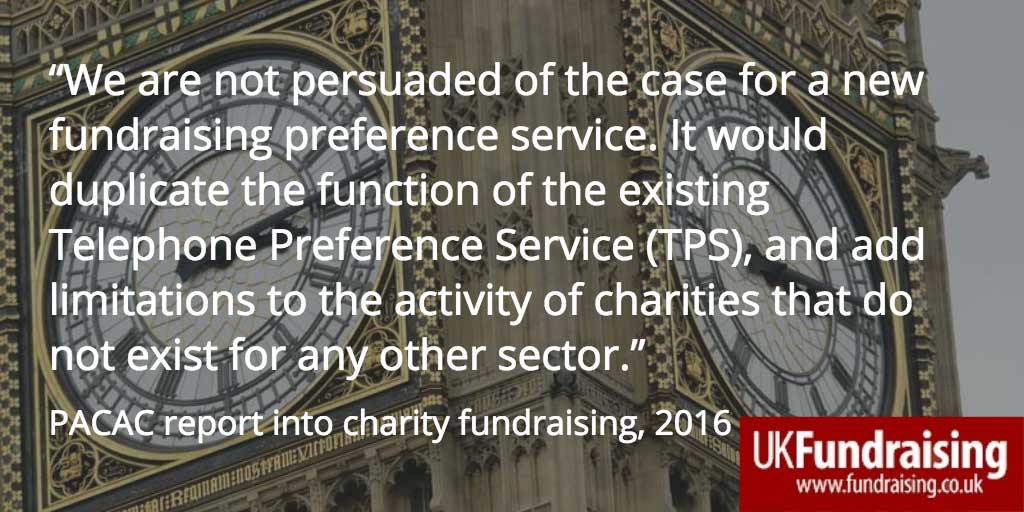 Large, small or all charities?

The Etherington review excluded consulting museums, universities and academies – which, as excepted charities, are not regulated by the Charity Commission – for the purpose of producing a “swift review”. While the Committee accepted that reason, it still added that:

“The new regulator should urgently consult with these charities on its approach to regulating them”.

Some of the concerns raised about the new self-regulatory regime and the fundraising preference service in particular are that they might attempt a one-size fits all approach to all charities. Some of the comments in the Committee’s report suggest a recognition of this challenge:
• “PACAC also launched an inquiry, to examine both the regulation of charity fundraising and the way in which trustees of large charities govern fundraising” [our italics].
• “We have no doubt that most of the charities in the UK do not engage in the practices outlined above…  This makes it all the more essential that greater care is taken over the governance of fundraising in some charities and its regulation is reformed”.
• “In the case of some smaller charities, it would be inappropriate to mandate a level of skill and scrutiny that is not required to protect their reputation”.

The Committee was enthusiastic about the role of The Daily Mail in raising the issues that had resulted in the this investigation.

“PACAC commends the Daily Mail and Mail on Sunday, and Katherine Faulkner in particular, for the highest standards of ethical investigative reporting, which even the charities concerned have commended to us”.

However, it noted that some of the allegations made by the newspapers remained just allegations:
• “At the time of her death, allegations were made that she had been pressurised by leading charities to make donations to them”.
• “These investigations [by the Fundraising Standards Board] supported some of the Mail on Sunday and Daily Mail’s allegations”.

Indeed, the Committee’s report gave some coverage of the Daily Mail’s criticism of the Fundraising Standards Board over the way it reported on its allegations in its report on Oxfam in December 2015.
The FRSB criticised the Mail on Sunday for its headline, ‘OXFAM TARGETS DONORS AGED 98’ which they found to be “not only misleading but inaccurate and untrue.”
The Committee’s report offers The Mail on Sunday an extensive right to reply, based on its submission to the Committee:

“It [the FRSB] has seemingly wilfully diverted attention away from the serious wrongdoing of Oxfam and its agents which was uncovered by a powerful Mail on Sunday investigation (carried out by an award-winning journalist and shortlisted for the Investigation of the Year award) by giving priority in its report to wholly unfounded criticisms of our article and in particular its headline…
“The FRSB has undermined its investigation, and indeed its very raison d’etre and exposed itself as a weak and ineffective regulator that is not fit for purpose”.

The Daily Mail then went on to quote three poll sources that report “public concern” about fundraising methods. It is quoted in the report arguing that “these fundraising issues are not isolated episodes”.

The Committee made a number of recommendations for trustees:
• “It is for trustees, in the first instance, to examine whether they are satisfied with their own ability to ensure that their charity lives up to its values”.
• “Trustees need to take positive action to ensure that they are not blind to their charity’s fundraising activity”.
• The RNLI’s move to opt-in communications from 2017 was welcomed by the Committee although it stopped short of recommending all charities take such an approach.
• There should be more training for trustees in their fiduciary and other responsibilities: “The new regulator, and where necessary, the Charity Commission, should validate and recommend suitable training courses for trustees”. 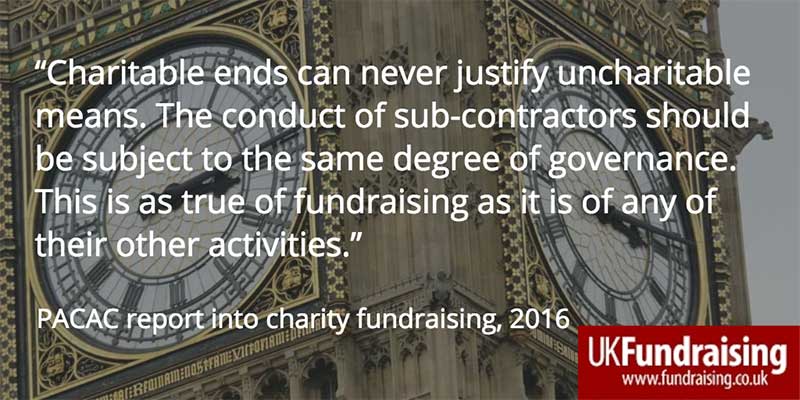 The Committee recommended that:
• the Charity Commission should gain a higher profile and be “more proactive to ensure the new system works”, holding public hearings into subjects such as fundraising in the future. The Government should give the necessary legal powers.
• the new Fundraising Regulator should be made accountable to the Charity Commission.
• the Commission should act as guarantor of the regulation of fundraising, ensuring that regulators (like the new fundraising regulator and the Information Commissioner) cooperate with each other and that trustees understand their duties.
• the Government should immediately bring into force legislation made in 2008 but never yet implemented, that would allow the Information Commissioner to enforce laws protecting use of personal data
the Charity Commission and the Government should consider how to monitor donations from overseas, so that authorities are aware of charities in receipt of “funds from potentially harmful sources”.

Given the considerable amount of time, expense and effort involved in this report, it is lacking in numbers and data. How many charities were operating in the ways criticised? How many agencies? How many heads of fundraising? How many criminal court cases were made?
Instead, broad brush terms such as “large volume” are used, or the unspecific “a number”:

“We received a large volume of evidence and representations in reaction to the original allegations, and in response to our inquiry, from charities, representative organisations and from individuals”.

“The media also brought to light a number of specific cases, including that of Olive Cooke – who received hundreds of fundraising communications a month, and Samuel Rae – whose personal data was repeatedly bought and sold by charities and commercial companies”.

Without numbers, it will be difficult to measure the changes and improvements that the Committee calls for.

“This is the last chance for self-regulation”

“This sorry episode has damaged the reputation of charities across the board, including those who have behaved properly, and hindered their ability to raise essential funds. This is the last chance for the trustees of charities, who allowed this happen, to put their house in order. Ultimately, the responsibility rests with them. No system of regulation can substitute for effective governance by trustees…
“Trustees already have all the powers they need: they must have the right skills, information and attitude to prevent this kind of poor and sharp practice happening again. Government must monitor the sector and not hesitate to use its reserve powers if needs be, but it would be a sad and inexcusable failure of charities if statutory regulation becomes necessary.”

Andrew Hind appointed as new Chair of the Fundraising Standards Board

Seven board members appointed to the Fundraising Regulator