Donors are not as influenced by social media as fundraisers believe, but – since the engagement index level of 18-34s is an impressive 120 (where 100 is the average) – they cannot afford to ignore it.

• 18-34s are most engaged with social media
• High-value donors are less likely to engage with it than low-value ones
• Donors are not as engaged with social media as fundraisers think
• Donors find it convenient though not very personal
• Low-value donors regard it as welcoming and convenient
• Ideal as a launch-pad for homepage and video links
• Download your copy of the Fundraising Media DNA report and infographics.

Who engages with social media? 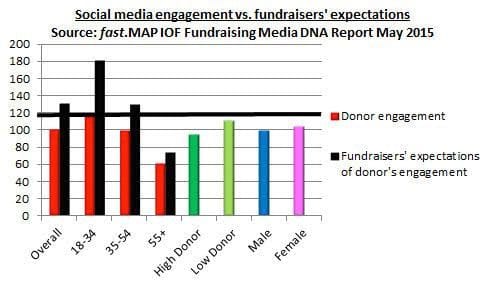 Although the older age groups are active on social media, they did not index as well as the younger groups.
While fundraisers accurately identify the overall order of engagement for the different age groups, they think donors are more engaged with social media than is the case (Engagement Index; 18-34s Estimate, 181 vs. Actual, 131).

What is social media’s personality? 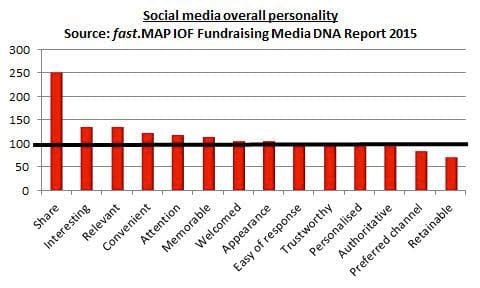 Fundraisers accurately named the top three personality attributes donors associate with social media: ‘ability to share’, ‘interesting content’ and ‘relevant to my likes and dislikes’.
And donors think social media is convenient (Convenient Index; Overall, 123), but they do not perceive charity contact by this route to be very personal (Personalised Index; Overall, 95). This perception might be improved if charities were to place responses on Facebook walls and take part in Twitter conversations.
Over 55s are more likely to feel it has a ‘strong appearance’ than the 18-34s (Appearance Index; 55+, 149 vs. 18-34s, 92), possibly because the latter use social media more often and expect creative visuals so are less likely to be impressed.
Unsurprisingly, social media does not score highly as a preferred way to hear from charities (Preferred Channel Index; Overall, 86) or for providing information to hold onto for later reference (Retainable Index; Overall, 73); since its strengths are rapid sharing, fast response and hot topics.
The successful combined use of SMS and social media to promote SMS donations (which tend to be of between £3 and £10) could be why those who make low-donations give it its highest score for convenience (Convenient Index; Low Donors, 137). Low-value donors also find it welcoming (Welcomed Index; Low Donors, 112) possibly because there is no pressure to donate large amounts.

How donors respond to social media

Because it is easy to use, instantaneous and can be shared with thousands of people at the touch of a button, social media scores exceptionally highly for sharing (Share Index; Overall, 250) a feature which charities can use to promote awareness. 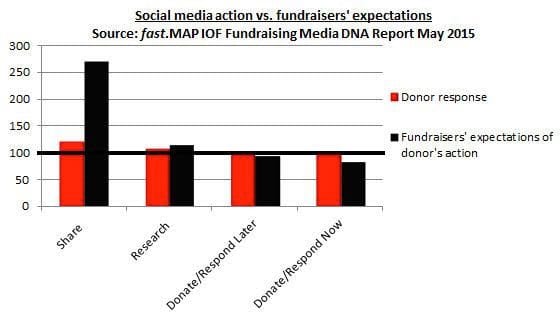 It is not a platform on which people can easily donate, but it can be used to share evidence of donations and encourage others to give e.g. the Ice Bucket Challenge to which people made text donations.
It can also be used to trigger research (Research Index; Overall, 108) and influence people who have never heard of a specific charity before to investigate further. This makes it ideal to use as a launch pad by integrating links to charity homepages and videos, or to publicise the project successes.

What people say about social media

“Social media is obviously growing as a fundraising channel. A key challenge for fundraisers in social, as in any other channel, is making it as easy as possible for potential donors to give once they’ve been moved to do so by a fantastic proposition.
#nomakeupselfie was an example of a fundraising moment where mobile was key.
Think about the experience of those who took part:
• Their mobile phone vibrates. It’s a Facebook notification.
• They’ve been tagged and challenged to take part by someone they know.
• Their mate has done it so they feel they should do it as well.
• They take their selfie on their mobile phone.
• They post their selfie to Facebook, from their mobile phone.
• They make a text donation from their mobile phone.
Mobile and social were critical to its success.
This makes sense, because people are constantly checking their social media networks on their smartphones. And giving by SMS is frictionless and easy to do – there’s no fiddling around with credit or debit cards. Both social media and SMS are convenient channels (Convenient Index; Social Media, 123; SMS, 106).
We really think that the worlds of mobile, digital and social converged years ago. To continue to think of them as different is missing the point.”
Paul De Gregorio, Head of Mobile, Open Fundraising

“Social media was clearly seen a few years ago as a way of tapping into new audiences, outside of the conventional. It is no surprise that 18-34s are much more likely to engage with social media (Engagement Index; 18-34, 120). While some networks – particularly the emerging ones – have popularity with teens and millennials, fundraisers must be careful to not be too reductionist. Social media is not just a channel for youngsters.
It is also interesting to see that social media has higher engagement with those that donate less than £20 a year to charity. It must be remembered that the channel’s strengths are in creating conversations and the ability to share (Share Index; Overall, 250). Charities have to think clearly about their objectives with the medium and remember that the ‘viral’ effect needs planning and work.”
Scott Logie, MD, REaD Group Insight

“The huge rise in the use of social media has created a new channel and new opportunities to communicate and build relationships with supporters. As technology continues to develop it’s important to bear in mind the relationship between ‘functionality’ and ‘action’. While it might be really simple to share, or reply immediately to social media messages, it seems that fundraisers perhaps overestimate how much donors will take action just because it’s easy to do so (Share Index; Overall Estimate, 250 vs. Actual, 120). While the functionality of social media might make it easy to share content, donors will only do so if it is memorable, interesting and relevant, and makes them want to.
What is also clear from the research is that social media is a launch-pad that encourages people to go further and look at your charity’s website (Research Index; Overall, 108), so it’s crucial that all the bits of the different parts of the journey for supporters are joined up and consistent so that there’s a seamless path for donors to interact and engage in response to social media messages.”
Daniel Fluskey, Head of Policy and Research, Institute of Fundraising

“The temptation with social media, as a fast-paced environment, is to run campaigns without thinking through the merits or actions that you want your supporters to make. I would urge fundraisers to look at the personality attributes people associate with the channel.
Besides the convenience factor (Convenient Index; Overall, 123), social media has many elements with other mass-communication channels. It is seen as attention-grabbing and memorable (Attention Index; Overall, 119) (Memorable Index; Overall, 116), and importantly, relevant to people’s interest (Relevant Index; Overall, 136). Campaigns therefore should consider the importance of visuals and clear, to-the-point messaging. It must also be repeated, given the medium’s lack of retainability (Retainable Index; Overall, 73) and the important principle in marketing of repeating an ask to increase the likelihood of response.
Going back to relevance, fundraisers also need to bear in mind how forthright donors can be if they disagree with something they have seen. Fundraisers need to carefully plan to ensure the right message is going to the audience that is on the platform, otherwise a campaign risks being derailed.”
David Cole, Managing Director, fast.MAP

• Read about the publication of the fast.MAP/IoF Fundraising DNA Benchmark report
• Analysis one: building trust in charities
• Analysis two: DRTV
• Analysis three: how donors respond to fundraising channels by age
• Analysis four: email, the channel donors want to hear by
• Analysis five: the most common perceptions by fundraisers
• Analysis six: direct mail – are donors open to it? 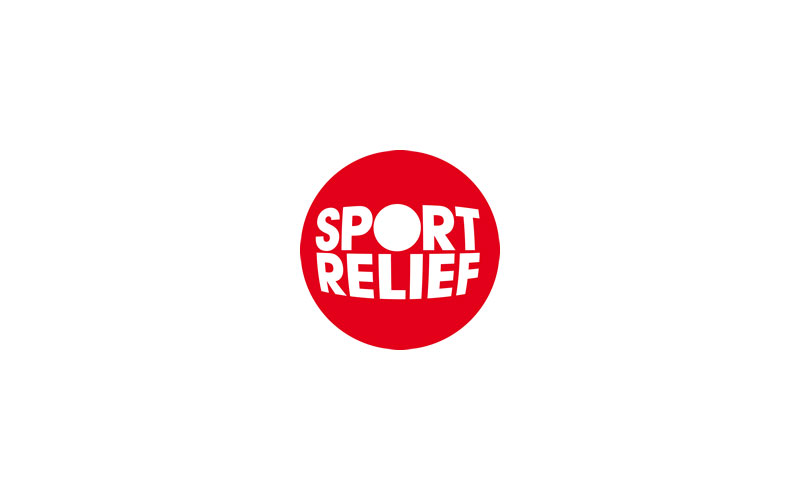