Fundraiser and charity chief executive Liz Monks has died following a 12-month battle with cancer.
She worked in the charity sector for over 20 years, holding senior fundraising roles at Terence Higgins Trust, Shelter, RNID and Action for Children. She served as Director of Fundraising at Breast Cancer Campaign and the Alzheimer’s Society.
She also chaired the Institute of Fundraising National Convention Board for many years, helping to expand and develop it to its present scale and quality.

Fundraising to make a difference

Friends and colleagues of Monks have spent the last few months supporting her wish to raise funds for Macmillan Cancer Support. She announced six weeks ago that she wanted to raise £20,000 to fund a staff member to work full time for one year at the Royal Free Hospital in London where she was being treated.
She was passionate about why such support was vital. She said:

“I want to make sure that no-one has to go through such misery and loneliness when someone can be there to hold their hand through their difficult decisions, advise or advocate for them… This is one of the most positive things I can do in the time I have left… to use my fundraising skills, and people I know, to make a difference that will help other people after me. In my situation I am sure you’d want to do the same – it’s what makes our profession, and makes us so proud to be in it.”

As the fundraising has developed, it has become clear just how many fundraisers have been nurtured and inspired by Monks. Comments on her appeal page show just how much she was respected by fellow fundraisers.
Lynda Thomas, CEO of Macmillan and a close of friend of Monks, spoke today about her courage and conviction:

“Liz was not just a brilliant fundraiser but also one of the most influential leaders in our sector. Her ability to inspire and galvanize people to make change happen was demonstrated right to the end. Courage is often a much over used word, but in Liz’s case never so apt.”

The group of friends and former colleagues promised Monks that they would continue to donate and fundraise for her appeal, and to reach a new target of £50,000.

Thoughts are with the family of Liz Monks. Struck me as both inspirational in her fight & dedicated to her career. https://t.co/fpyqoKUKP9

Fellow of @ioftweets @liz_monks sadly lost her fight against cancer her wish was to raise £20k @macmillancancer RT https://t.co/YiI97N2OXT

Sad news. Our sympathies to family & friends of @liz_monks Please give in her memory here: https://t.co/tCZObPIYwB https://t.co/CHq6dhlbgY

Very sad to hear about Liz Monks death. She will be greatly missed. Liz wanted to raise £20,000 for Macmillan. I hope the fundraising 1/2

Community will rally round & help smash this target. Her Justgiving page is here: https://t.co/RVEHfkJglp

All of us at the IoF would like to pay tribute to Liz Monks, friend and Fellow of the IoF, who has sadly passed away https://t.co/sSEo2G43iY

So sad to hear the news. Liz Monks – what a beautiful, inspiring and strong woman. https://t.co/h7jcyeo7Ob

Such sad news. @liz_monks was inspiring both in & out of work & a true fundraiser right to the end https://t.co/3k1VjnTLEZ

Such a great loss; passionate fundraiser, supportive friend & great co-conspirator. Our sector is the poorer https://t.co/HA7SZGF58n

Very sad to hear this. https://t.co/YCcbuxsnsN

So sad to have lost Liz Monks this week: a friend, colleague and galvanising force in the fundraising profession https://t.co/BIr52cfTDB

We'd like to express our sadness at passing of Liz Monks, former Director of Fundraising at Breast Cancer Campaign https://t.co/KTmFnEGjmh

“I had the pleasure and honour of knowing Liz and counting her as a proper fundraising friend. I worked with her on the National Convention board and she brought a fresh energy, enthusiasm and passion that was a real inspiration.“Personally though, Liz was a great confidante and always there with a wise word and advice. Her friendship and support – especially at a time of turmoil – was hugely appreciated and I – and many others – will miss her”.
Danielle Atkinson

“Liz was one of the most talented, energetic and creative fundraisers I’ve ever met, as well as one of the nicest. She always made time to offer support or advice. She led and influenced those around her with great enthusiasm and energy, was sincerely passionate about the good causes she worked for, and for fundraising itself.
“The epitome of a proud fundraiser, she was an inspirational member and Fellow of the IoF, and during her time as chair of our National Convention Board she led the way in making it one of the biggest and best fundraising events in the world. A true believer in the importance of our fundraising community Liz will be missed by us all.”
Peter Lewis, CEO of the Institute of Fundraising

“What a truly inspirational and generous soul we have lost. About to re-double efforts for Liz’s appeal.”
Derek Humphries 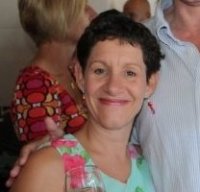