How much is London’s giving worth to charities? £5.6 billion a year is the first attempt to measure this, published in a report today by City Philanthropy.
The report, More to Give: London Millennials Networking for a Better World, has found that London’s cash giving represents 29% of all private giving in the UK.
It is the second part of London-wide research on giving in London commissioned by City Philanthropy, a project funded by the City of London Corporation’s charity, City Bridge Trust. It aims to promote more effective philanthropy among City professionals earlier in their careers and position the City of London as a leading global centre for philanthropy. 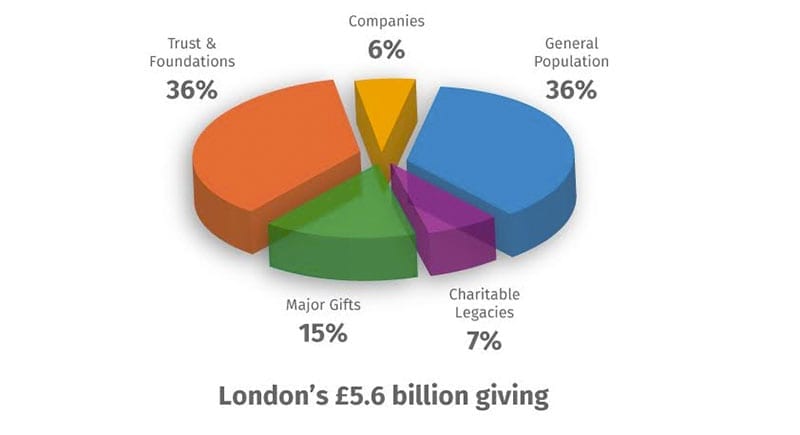 The research also reports that London employees are embracing US-style donor-led networks such as:
• BeyondMe
• City Funding Network
• BeMore
• Contact Collective young philanthropy network
There are currently around 80 giving networks across the UK and Ireland, and they are growing in depth. The report surveyed in depth more than 100 members of networks located in, or connected with, London.
These could generate £20 million or so in charitable funding and thousands of hours of pro bono support if just 1% of London employees became involved in them, according to City Philanthropy’s report.
The research was co-authored by Professor Cathy Pharoah of Cass Business School’s Centre for Charitable Giving and Philanthropy. She said:

“Representing 29% of all UK giving, London is more than keeping pace with its contribution to UK GDP at 22%. But London is also home to many of the UK’s wealthiest people so we need to raise the bar on what we expect, and ensure that the City fulfils its potential as a hotspot for philanthropy.”

The report, co-authored by Dr. Catherine Walker, confirms that London’s workers believe they should use their business expertise to support charitable causes. Over 80% of network members in London want to use their skills and professional experience to make a difference; three-quarters of them say their involvement in giving has improved their own leadership and motivational skills.
The survey shows that two-fifths of network members want to increase the amount they give to charities and do more volunteering. Key motivations are improving their local community and creating an impact with their donation.
Peter White, Senior Associate at PwC and BeyondMe network member said:

“There are many ways to give back. I encourage anyone passionate about a social issue to get involved. By tackling a cause with friends and colleagues, you can make a greater difference. I’ve found BeyondMe’s model of donating time, skills and money a powerful approach to create social impact. BeyondMe also helps develop my leadership skills, expand my network and is an experience I enjoy.”

“CFN is a great platform to enable city professionals to not only expand their professional network, but meet other like-minded people who care about the society they live in. Live crowdfunding is fun, inspiring and a powerful way to make a difference.”

On the publication of the report, City Philanthropy’s Cheryl Chapman, said:

“We know that giving networks are well-suited to the city where there is a concentration of businesses, young workers and charities, and where wealth and need exist side by side. There is an opportunity to really grow this millennial-led movement and we are calling on London’s businesses to support giving networks as part of their CSR commitment and help them achieve their potential.”

The report calls on employers and companies to support the development of work-based networks as part of their Corporate Social Responsibility and company giving programmes.
It also invites further investment in London’s giving networks in order to increase donations of time and money, and it recommends raising awareness of giving networks amongst trade bodies, schools and universities.
You can download the report More to Give: London Millennials Networking for a Better World.