“Every city or house divided against itself shall not stand” Matthew 12:25
So far 584 telephone fundraisers, who each spoke to more donors in a single day than any fundraising director does in a year, lost their jobs. And it’s surely only a matter of time before many more street and door fundraisers will be looking for work too.
Sacrificing 584 fundraisers to cover the asses of the people who hired them is a stain on our sector’s conscience.
A couple of years ago the then chair of the Institute of Fundraising made a brilliant, impassioned speech, calling on the sector to get behind the people who did the hard work of actually asking for money, crying

“…if you spend it, you should be bloody proud of those that raise it.”

Proud to be a fundraiser

Last year the ‘Proud Fundraiser’ campaign was launched to “promote the vital work fundraisers do and get entire charities behind the fundraising effort”. 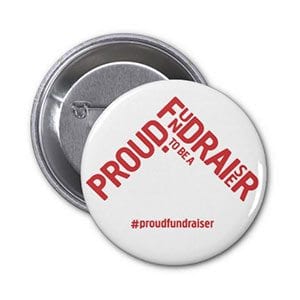 Did we mean it, or was it just something we said at conferences to pep ourselves up? Where was that pride when it counted? Where is it for the 584 fundraisers suddenly out of work, with no warning, severance pay, or clue how they’ll pay the rent?
But maybe that’s not the sector’s responsibility – maybe they weren’t real fundraisers in the first place? The Directory of Social Change’s CEO couldn’t be clearer she doesn’t think they are:

“Some of our private-sector, subcontracted fundraising organisations sometimes overstep the mark and don’t behave according to the values we expect. That’s because, unlike us, they’re in it for profit. But we stamp on them when we find out.”

If that’s true we can be truly proud at how hard those 584 overstepping profit seekers have been stamped on! But is it true? It’s well publicised those at the top of the charities make pretty good personal profits. None of us should have a problem with that. In fact I bet all the coverage of fundraising director’s salaries and homes encouraged many to be the ‘best they can be’. 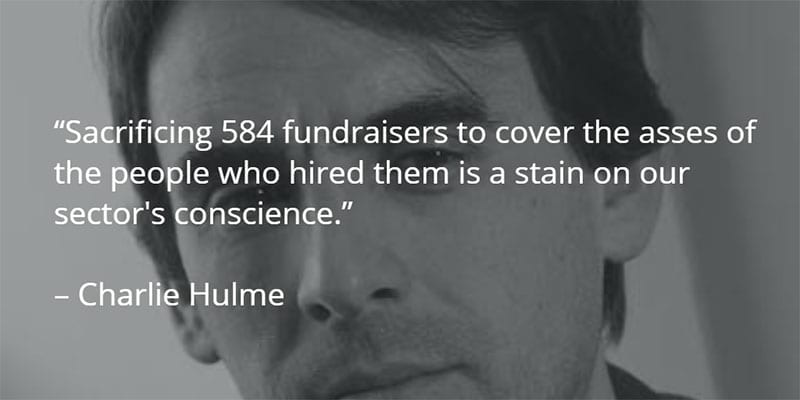 But what I’ve never understood is the mentality that says if you draw a salary to work for a single cause you are a pure fundraiser. Yet if you draw from the same pot for working for several you are somehow less so. It makes no sense (especially when you consider the massive migration of cause hopping careerists, and the constant crossover from charity to supplier and vice versa).

However daft the logic, and hypocritical the attitude, it is none the less pervasive. No more so than now. And it’s killing the sector.
Have you ever noticed the people most vocal about the crisis in fundraising are usually the ones that wouldn’t be considered ‘real’ fundraisers by those who hire them to raise funds? Those with most contact with donors, those with a birds-eye view of the sector (by virtue of partnering with multiple charities), see things very differently than those who only see donors as anonymised data on a spreadsheet.
If instead of making 584 fundraisers unemployed we’d asked them what people were saying on the calls they were being paid to make, we’d see things differently. But first hand reports of enormous donor dissatisfaction are ignored in favour of the comforting data that says complaints aren’t rising and giving hasn’t dropped.

That would be great if it were true. But the trouble with a mindless deference to spreadsheets is data cannot answer questions you do not ask. 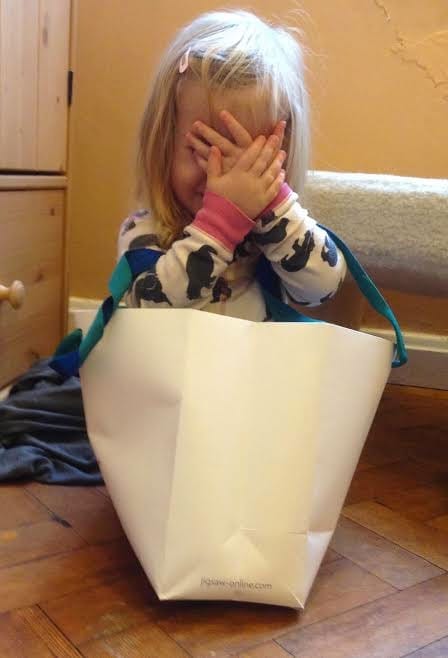 Of course complaints haven’t risen – we know people find it hard to complain to a charity. And we make it incredibly hard for them to complain. Our approach to supporter services is the same one my two year old daughter takes to playing hide and seek – if she can’t see me then I’m not there.
Of course giving hasn’t dipped – it’s remained static for years. This doesn’t tell us there’s no crisis, it tells us the same people are giving the same amounts, regardless of our efforts.
If our only reaction to the latest media mauling is to play the blame game, make a few sacrifices, smooth off a few rough edges and carry on regardless then we may as well all go home now. Giving won’t dip.
All kinds of commissions are being called to make sure whoever we hire will “…behave according to the values we expect”. Fine. But where is the commission that addresses the root cause of the problem?
Where is the commission that will ask what the common denominator of all the bad press telephone, direct mail, street and door fundraising have had (and that mobile and digital inevitably will have) is? The panel that will say this clearly isn’t about channel but about the mentality with which we use it?
Where is the commission that will say we have reaped what we’ve sown? That says if we continue to treat donors as widgets on an assembly line, bombarding them with zero understanding of what they’d give to and why we’ll turn our sector into at best a nuisance at worst an irrelevance? And then none of us will be fundraisers.

Live report from Institute of Fundraising IT SIG conference