“Fundraisers should go on strike,” someone told me at the IoF Convention last week. She was only half joking.
I’m not suggesting that fundraisers should strike. But I am suggesting that they consider it. Because the process of considering a strike will require collective action and collective thought. It will throw up dynamic individuals who are prepared to challenge the current leadership by fronting a collective voice that speaks in defence of fundraisers.
[quote align=”right” color=”#999999″]’The voice of a ‘National Union of Fundraisers’ would have been heard loudly over the past couple of months'[/quote]
Not in defence of fundraising – the profession; but in defence of fundraisers – the people that actually do the job. Because a profession is nothing without the professionals who perform the role.
Yet while the world and his wife currently has a view on what’s wrong with fundraising and how it can be put right, the only group that doesn’t seem to have a collective view on what’s going on right now are fundraisers themselves.

Fundraisers can’t be trusted – or so it seems

Who speaks for fundraisers? 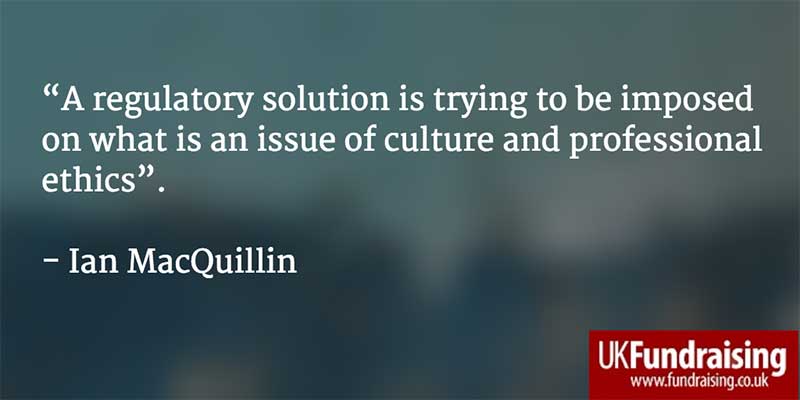 For example, the needs of the IoF’s larger organisational members – those that are geared up for industrialised individual giving programmes – are served by a culture that promotes cheap, high volume donor acquisition. This need is manifested by high short-term targets that are often outsourced to agencies and managed by relatively junior fundraisers, often working long hours of unpaid overtime. Whole campaigns are often under-resourced (because there is always another agency that can do the job as cheaply). The result is that some agencies cut corners in a panic to meet the terms of their contracts and junior fundraisers leave their jobs within 18 months (for which we blame the fundraisers for being insufficiently committed rather than asking what’s gone wrong with the management process).
A body representing fundraisers might well argue that the needs of its members were better served by them not having to meet such under-resourced, high-pressure, short-term targets, and by having better working conditions. A voice representing fundraisers could well argue that that there is a need to shift the culture from cheap acquisition to a strategy based on recruiting higher quality donors who will stay giving for longer (which would cost more money initially but deliver better net income overall).
It’s not easy for a single organisation to represent both poles of this position.

Time for fundraisers to mobilize? 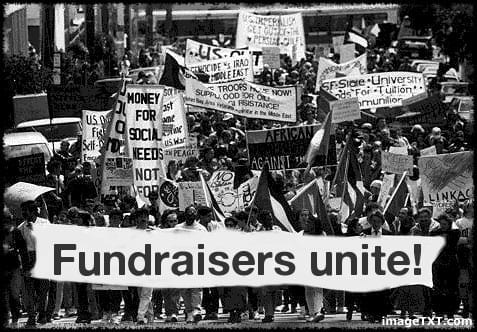 Who is standing up for professional fundraisers? (Composite image: UK Fundraising)

Adrian Sargeant and I both believe that fundraising would be better served by the code of practice being set by a body such as the Committee of Advertising Practice (CAP), which sets the codes for the advertising industry. Sir Stuart’s review may well recommend something like this.
If it did it would be excellent news for fundraisers, because it would mean that the Institute of Fundraising, relieved of its duties to set professional standards, could concentrate on representing the needs of its core stakeholders. Of course, it would have to choose whether its core stakeholders were individual members or organisational members: in other words, decide once and for all whether it is a trade association or a professional institute.
Whichever way the IoF swings, it will leave a vacancy that will need to be filled. If the IoF decides that it is a professional institute, then we will need a trade body that represents fundraising charities and fundraising agencies.
If the IoF decides that it really wants to be a trade association, then fundraisers will need to mobilize to ensure they have in their corner an organisation that will without fear or favour represent and stand up for professional fundraisers. Maybe they need to do that anyway.
I can’t imagine for a second that the voice of a ‘National Union of Fundraisers’ would not have been heard loudly over the past couple of months.

Main image: workers on strike by ProStockStudios on Shutterstock.com