What do the Fundraising Preference Service and the Cones Hotline have in common? Nothing. Yet. But we live in hope.
The Cones Hotline was the much-vaunted 1992 initiative of the prime minister, John Major, to set up a fully-staffed telephone hotline so that concerned citizens could report errant traffic cones that were loitering on our motorways and slowing down traffic, so someone would come along and remove them. Yes, twentysomethings too young to remember, this really happened.
Predictably, hardly anyone used it.
Let’s hope that similarly few people avail themselves of the Fundraising Preference Service (FPS) – one of the key recommendations of Sir Stuart Etherington’s review of self-regulation published this week.
I’ve written in some depth about why I think the FPS is a bad idea in my blog at Critical Fundraising, so I won’t rehash those arguments here.
But I will outline a few other thoughts here about the FPS and about the review itself.

Will people use it?

I was chatting about this with Kevin Waudby of Good Innovation. He reckons that most people won’t use it. I hope to God he’s right. If they don’t, it could be that fundraising isn’t really the menace to society that the Daily Mail and its ilk portray it to be. Or it could be that, à la Cones Hotline, people just aren’t that bothered, when push comes to shove.
If Kevin is right, then a lot of charities will breathe a sigh of relief because it means that they will be able to continue to build relationships with their donors.
Sir Stuart’s review says charities need to be “inspiring people to give and creating long-term, sustainable relationships” and “conduct fundraising not simply as a way to raise money, but most importantly as a conduit between their donors and the cause they wish to support”.
However, that will be quite hard to do if you are not allowed to contact your donors. This is a point I raised in my Critical Fundraising blog but I will mention it again here because it is such an important one. Anyone who registers with the FPS will exempt themselves from all charity fundraising asks, including fundraising from organisations they donate to.
Suppose a donor giving £10 a month to a charity signs up to the FPS. The charity can no longer contact them to ask them to upgrade to £12, nor send them the Christmas appeal. Although it doesn’t say this in Sir Stuart’s report, NCVO’s Karl Wilding confirmed to me this is what it means. That’s why they call it a “reset” – so anyone can reset the fundraising communications they receive to zero, across the board, with a single mouse-click.
Now if you can’t ask them for further donations, then what is the point of building a relationship with them? Why bother inspiring someone to give if, when it comes to the crunch you can’t actually ask them to give once you have inspired them?
So if there’s minimal take up, we can all sit back and relax. Yes, that’s exactly what we might do. Cartoonishly wipe the sweat from our foreheads, say ‘phew!’ and then carry on exactly as before, under the assumption that because people weren’t registering with the FPS, there isn’t an issue to be addressed.
Of course there’s an issue to be addressed. Just because the pile driver of the FPS is being used to crack this problematic nut doesn’t mean the nut shouldn’t be cracked in other ways.
I am adamant that FPS is not the way forward. I’m also adamant we need to tackle the issue by more sophisticated means that will take longer to show results.
For one we absolutely must refashion and reinvent fundraising’s professional ethics. And second, we need to get off the short-term-low-cost-acquisition-offset-by-high-attrition treadmill. Which brings us to…

As Sir Stuart has said in the review and in the media, charities need to build long-term relationships with donors, not treat fundraising as a transactional cash cow, and may need to suffer a short-term drop in income in the expectation of longer-term rewards.
Mmmmm. This is slightly ironic.
Fundraisers haven been crying out for investment in relationship fundraising to build such long-term relationships, yet boards, SMTs and finance directors regularly freeze – or cut – their budgets and increase their short-term (usually annual) targets. Rogare has just completed a massive review of relationship fundraising and one of the most regular comments from the project’s advisory group was that they couldn’t secure the budget to do what Sir Stuart has said his review will result in – a long-term increase income following a short-term drop.
If boards (the very constituents NCVO represents) had taken a more active interest in and longer-term view of fundraising, and authorised their finance directors to invest in fundraising, we might not be in this position now. Seems a bit like we are trying to bolt the FPS on to a carthorse that is already trotting away from an open stable door.

A preference service by any other name… 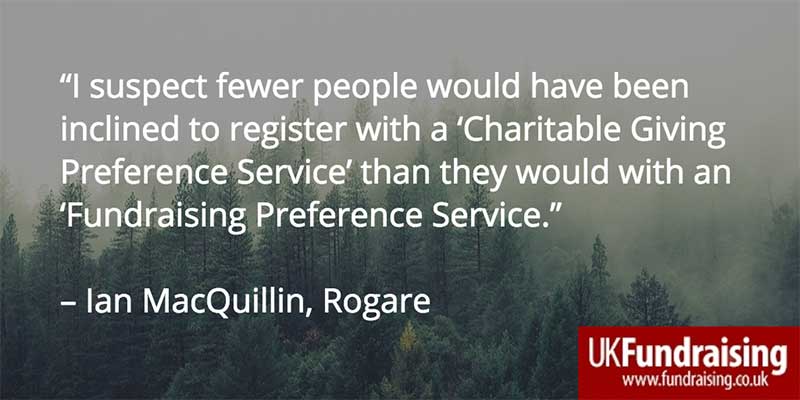 The Fundraising Preference Service emphasises the actions that charities take – they ‘fundraise’. So you, the member of the public, are opting out of receiving actions that are initiated by the charity.
However a Charitable Giving Preference Service emphasises the actions that the donor takes – giving, or making a donation.
Registering with the CGPS would require a decision making process by which the non-donor would have to consciously choose NOT to give to charity. It is about the actions they take. That could of course make them feel uncomfortable and guilty, the same way that declining a fundraising solicitation does.
But by registering with the FPS, the decision process is not about the non-donor having to make any kind of decision; it’s instead all about what the charity ought not do.
• CGPS = person’s choice not to give (hard decision for non-donor)
• FPS = charity required not ask (no decision required by non-donor).
It’s a subtle difference and the result is the same – a person is not asked to donate. But the cognitive processes they go through to get to that point could be very different and could affect their decision whether to register.

Suppose the worst-case scenario comes to pass and loads of people do register with the FPS. If I were a fundraiser, I’d be inclined to use it as an excuse for failure. My budget’s been cut, my targets have been raised, and now I can’t contact my donors any more. I’d just kick it all back to the board and ask them how they wanted me to proceed seeing as we can’t reach anyone and we couldn’t afford it even if we could. I’d also be tempted to sign off my email with ‘told you so’. And while I waited for the response, I’d probably spend the time researching an alternative career.

If loads of people do NOT register with the FPS, it will show that we never needed it in the first place and the whole process by which it came about was even more jerrybuilt than we thought.