The death of 92-year-old Olive Cooke in a fall in the Avon gorge in Bristol has been linked by some of her family and a friend to the direct marketing and telephone fundraising tactics of some charities. Her lifelong involvement as a volunteer fundraiser has ensured that this sad case has received front page new coverage in the UK.
However, despite the newspapers’ headlines, no-one has explicitly claimed that the distress she experienced contributed to her death, which police are not treating as suspicious.
Cooke was one of the UK’s longest serving volunteer Poppy sellers, having raised funds for the Royal British Legion for 75 years, often standing at the entrance to Bristol Cathedral. Last year she was awarded one of the Bristol Post’s Gold Stars for her fundraising activities and a Lord Mayor’s award.

In October 2014 she herself told the Bristol Post that she received up to 10 charity appeals every day, collecting 267 in one month to show what she experienced. She said to the newspaper that she spends one afternoon a week sorting through the letters, adding:

“I open and read every single one of them but my problem is I’ve always been one that reads about the cause then I can’t say no. The stories play on people’s generosity”.

She supported many charities over the years, but concluded:

“I will continue to donate to charity, but I can only select a few which I think are most important.”

Following Mrs Cooke’s death, her granddaughter Louise told The Guardian that “she believed pestering by cold-callers” had added to her grandmother’s distress before her death.
Her son, Del Whelan, 62, told the newspaper:

“It was the constant drip of the begging letters. I think she found it difficult to say no. She had just had enough.”

“She thought she had done something wrong.”

A friend of Mrs Cooke’s, Michael Earley, said of her reaction to the requests for donations that she received:

Not “the reason that Olive took her life”

Both Mr Earley and Mrs Cooke’s granddaughter commented that Mrs Cooke had also been very upset by the theft of £250 from an envelope sent through the post. According to the latter, she also had health problems.
Some news coverage, including the front covers above of The Sun and The Daily Mail, has drawn a direct link between Mrs Cooke’s distress over receiving charity appeals and her death:

However, her daughter Kathryn King today “dismissed this to be the reason that Olive took her life”, according to the Bristol Post. 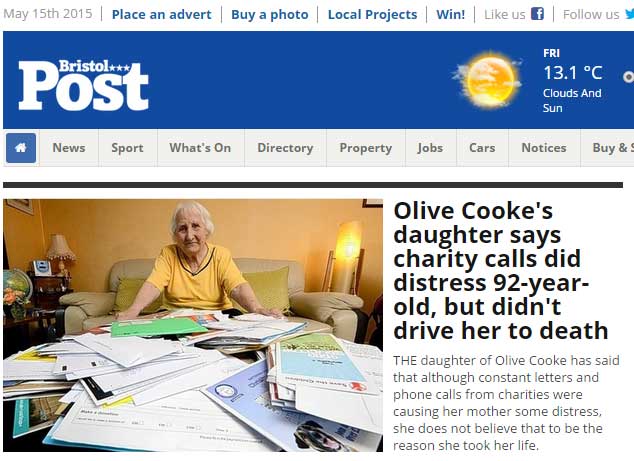 “Charity calls… did not drive her to her death”. Olive Cooke’s daughter interviewed by Bristol Post, 15 May 2015

Peter Lewis, Chief Executive at the Institute of Fundraising, said:

“Olive was clearly an incredibly generous supporter of charities both in terms of her donations and as a fundraiser with the Poppy Appeal and we extend our deepest condolences to her friends and family.
“All members of the Institute of Fundraising sign up to the Code of Fundraising Practice which sets the standards for all forms of fundraising.
“It is absolutely clear in our Code that if an individual no longer wants to receive communications from a charity, in whatever form, they simply need to let the charity know. If the charity then continues to contact the member of the public it is a breach of our Code, and the person can take their complaint to the Fundraising Standards Board, who will investigate and if needs be adjudicate against the charity.”

The Institute emailed its members this afternoon, highlighting relevant areas of the Code that they are required to adhere to, covering issues including Data Protection, telephone fundraising, direct mail and treating donors fairly.

The Institute has also confirmed that, following Olive Cooke’s death, its Standards Committee will meet to review the Code and Guidance to review what might be learned from the case. The Fundraising Standards Board, Public Fundraising Regulatory Association (PFRA), and charities have all agreed to feed into the review.
Peter Lewis, said:

“Fundraisers know that it is absolutely critical to maintain public trust and confidence in charities, and an important part of this is to fundraise in the right way and to the highest standards. The IoF Standards Committee – which sets the rules for fundraising across the UK – will review any learning following Mrs Cooke’s sad death to make sure that our rules and guidance for fundraisers are as robust as they can be.”

“The Code also makes it clear that charities need to be mindful of how they fundraise amongst people who may be in vulnerable circumstances and that organisations need to respect donor’s requests around the frequency with which they can be contacted.
“What is critical is that if you’re unhappy about how a charity fundraises or you don’t want to be contacted in a certain way, our advice is to get in touch with the relevant charities and talk to them. They will listen and respect your views, and your feedback can influence how they do things in the future. Public feedback is vital to help identify and resolve any such issues.”

McLean gave this advice to donors who wished to take more control over the volume of charity appeals received:
· Sign up to appropriate preference services (including the Telephone Preference Service (TPS) and Mailing Preference Service (MPS)
· Keep an eye out for tick boxes on donation forms to opt out of unwanted contact
· Speak to the charities concerned; they will listen and respect donor preferences

The Royal British Legion paid tribute to its stalwart collector:
https://www.facebook.com/OfficialPoppyLegion/posts/845133102230885
Three people have set up appeals on JustGiving to honour her.

Such sad news about #OliveCooke a reminder for us all that volunteers and donors our to be treasured and looked after, RIP

Please #Bristol, can we find a way to permanently honour and remember #OliveCooke ? @brislordmayor