Online payment processing platform Charity Checkout has added a ‘Give & Nominate’ feature to its payment process with the aim of stimulating “a chain reaction of giving” to small charities.
Now supporters of the charities that use the platform will be presented with the option of sharing their donations with their friends and contacts and to nominate them to follow them by giving to their chosen charity. The sharing can take place via email, Twitter and Facebook.
Sharing donations made online using Twitter and Facebook is not new of course, and JustGiving found just how effective such ‘social commerce’ sharing was in generating new donations.
But the nomination element is new, and reflects the process that underpinned the success of the ALS Ice Bucket Challenge campaign in 2014. 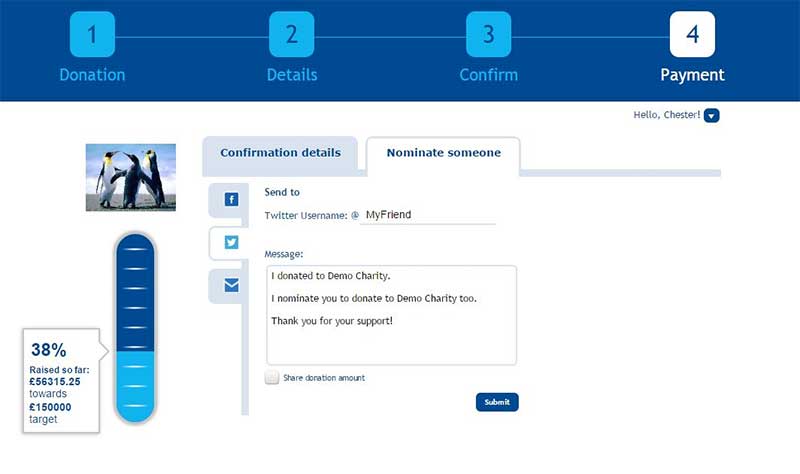 “We all witnessed the power of viral giving campaigns last year and feel that incorporating a dedicated nomination feature into our payment process will be vital in ensuring our charity clients can maximise their online donations.”

The average one-off donation via Charity Checkout is £92.37 and £21 for monthly donations. The social enterprise claims this is “above the national average” but that it hopes the new feature will increase this further.
Generating chain reactions in donations (or peer-to-peer fundraising) is also the idea behind new giving platform Givtree and Solar Aid’s platform Giving at the Speed of Light.