Inspired by individuals who wanted to donate their Winter Fuel Payment from the government to support older and vulnerable people suffering from fuel poverty, community foundations across the UK have launched the Surviving Winter campaign to encourage the public to make donations as well.
The money raised will be targeted to help those locally who struggle to stay warm and safe through the winter.
Each year around 20,000 more people aged 65 or over die in winter months than in other months. Last winter there were an estimated 25,400 excess winter deaths.
Saga is supporting the Surviving Winter Appeal and has featured the campaign in the November edition of Saga Magazine. Ros Altmann, Director-General of Saga, said: “I am delighted to be supporting this brilliant initiative to help “recycle” winter fuel allowances from those who don’t need them, to help pensioners who do. We feel it is important, as part of a caring society, to enable people who want to help those who are at risk of fuel poverty to keep warm and well this winter.”

[Dorset Community Foundation’s video about the campaign is no longer available – 19 June 2018]
The national fuel poverty charity, National Energy Action (NEA) is also endorsing the campaign. Peter Smith, External Affairs Manager at NEA, added: “As the national fuel poverty charity, we are only too aware of the dangers of living in cold damp homes, and with winter approaching many people will be dreading the prospect of cold conditions and high energy bills. Through the campaign, we hope to raise awareness of the 6.6 million UK households that are currently estimated to be in fuel poverty, as well as work with individual community foundations to deliver effective, tailored solutions that will permanently remove people from fuel poverty”.
Celebrities who have already pledged to donate their Winter Fuel Payment to the Community Foundation Network’s campaign include Terry Wogan, Sir Michael Parkinson and Joanna Lumley.

Samaritans to reactivate donors with a Christmas thank you mailing 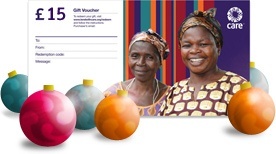 UK government to double donations to Sightsavers for three months