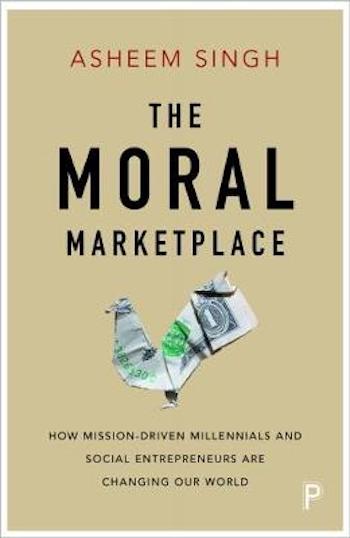 How mission-driven millennials and social entrepreneurs are changing our world. A book about social enterprise, impact investment and bitcoin, and the radical future that connects them.

Social enterprise is today worth $500bn in the US alone, representing 3.5% of US GDP.  Co-operatives – businesses owned by workers or communities – are expected to be the fastest growing business form worldwide by 2020. The largest 30 co-operatives are worth $1.6 trillion – more than the entire GDP of Spain.

The Moral Marketplace argues that this rapid global growth over the last decade has been a ‘quiet revolution’ of ‘mission driven millennials’ – young, business-minded altruists that put people, not profits first.

The Moral Marketplace’s author is Asheem Singh, an international activist, social entrepreneur, journalist and formerly the youngest ever CEO of leading UK charity leaders body Acevo. His book has already been described by Charity Futures’ Sir Stephen Bubb as “the most important work on social activism and the third sector to emerge this decade” and by Red Tory author Phillip Blond as “a remarkable book for dangerous times.”

Singh gives first-hand accounts of social innovation in India, movements built to counter cultures of abuse and rape in Zimbabwe. He shows how entrepreneurs selling ethical products across Europe and America have proliferated. He tells of unique public innovations through his contacts in President Obama’s administration, and shows how digital campaigns like #everydaysexism and innovations like block-chain technology have created a generational wave of social entrepreneurship.

“This book whirls the reader around the world and through history, telling stories which show a way forward that really will change things.”
Kate Welch OBE DL, Chief Executive, Social Enterprise Acumen CIC

“The Moral Marketplace is the most important work on social activism and the third sector to emerge this decade. Asheem Singh argues that only a fiercely progressive approach to changing the world will work. The future lies in these pages: not just for charities or social entrepreneurs, but for all of us.”
Sir Stephen Bubb, CEO of Charity Futures

WATCH: what is a social enterprise?