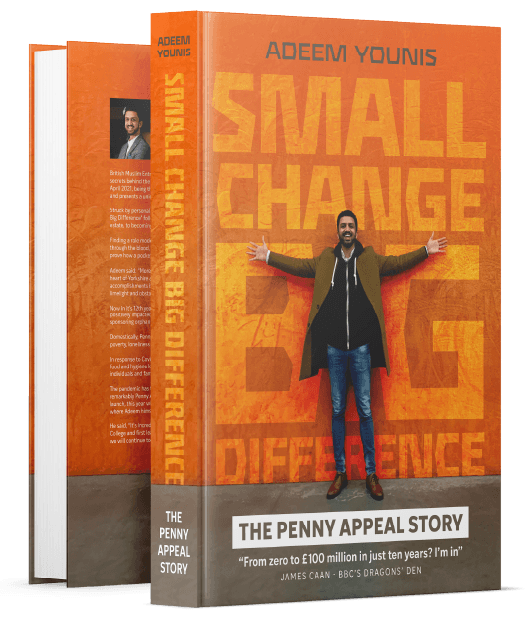 This is the story of Adeem Younis, a British Muslim entrepreneur who beat all the odds, built Penny Appeal, one of Britain’s fastest-growing charities, and proved how a pocket full of pennies really can transform the world.

Adeem built his fortune off the creation of the UK’s most successful Muslim marriage app, SingleMuslim.com. From his success as a self-starter entrepreneur, he went on to found the charity, Penny Appeal, in his home city of Wakefield and in the memory of his late father.

Penny Appeal provides poverty relief across the globe by offering water solutions, tackling food insecurity, supporting orphan care and providing emergency food and medical aid. With the support of the generous public and a dedicated team of employees and volunteers, the charity has improved the lives of millions around the world.

Since its inception in 2009, the charity has raised over £100 million for good causes at home and abroad. Penny Appeal has become one of the UK’s leading global charities helping communities and individuals overcome their barriers to a better life. Small change, BIG DIFFERENCE.

With a preface by the entrepreneur James Caan of BBC’s Dragons’ Den fame, himself a Penny Appeal Global Ambassador, The Penny Appeal Story is a fascinating and inspirational account of innovative thinking and life-changing marketing campaigns that have enabled Penny Appeal to transform the lives of millions of vulnerable people the world over.

“All proceeds” of the book will be donated to Penny Appeal.

Adeem Younis founded Penny Appeal in 2009 after spending several years supporting charitable projects in and around his family’s ancestral home in the Gujar Khan district of Pakistan. He is a successful digital entrepreneur, having built singlemuslim.com into a global business with three million registered users. Adeem has four children and lives in Wakefield, the city where he was born and raised.