This post is a partnership production by Paul de Gregorio from Open and Jo Wolfe from Reason Digital following our tour de force masterclass on mobile at IFC 2017.
We’ll level with you – if you weren’t at the International Fundraising Convention (IFC) in the Netherlands in October, you missed out. IFC is an awesome way to connect, share and collaborate with fundraising experts from around the globe. If you can get to IFC 2018, do it!
But this isn’t an IFC infomercial and we know very well that conferences in other countries fall way outside the budget envelope of most charities. So, dry your eyes. Here’s what we brought to this year’s IFC distilled into one snack-sized blog post.
Make sure your phone is in reach. You will need to tweet this!

In 2017, we question whether a separate masterclass on mobile is necessary. With over 50% of internet usage now taking place on mobile and over 95% of UK adults owning a phone, this channel must be considered as an integral part of your overall digital strategy.
[Tweet “Mobile = Digital. Digital = Mobile. Mobile = Social.”]
That said, we see so many charities fail to make the most of the unique opportunities mobile affords. Iconic fundraisers of recent months – the Bernie Campaign, Stand For Rights (a benefit for the ACLU), the One Love Manchester concert – would not have been successful without careful consideration of the mobile experience. Users of Breast Cancer Care’s BECCA app for women moving forward after breast cancer described it as, “a friend in your pocket.” That kind of interaction just doesn’t happen on the non-mobile web.

We spend huge amounts of time on our phones, unlocking them on average 150 times a day. For lots of us it’s the last thing we look at before we go to sleep and the first thing we check in the morning. Most people in our IFC masterclass weren’t too proud to admit they often use theirs on the loo. Charities need to be part of the relationship between donors and their mobiles – creating thumb-stopping content, engaging in conversation and solving their problems.
How about solving a problem and raising money? The Gone For Good app allows people to donate unwanted items to charity shops in three taps of their mobile screen.

If everyone has a mobile, it’s a logical step to unite those mobile users together behind a cause, a campaign or an idea. People are restless for change and want to make a difference. We need to leverage the potential of mobile to help bring about that change.
GoFundMe, and other sites like it, lets users crowdfund for the causes they care about and individuals they want to help. It boasts a whopping 79% of its traffic from mobile. Campaign organiser app Hustle helps bring people together for social action through the humble SMS.

So what are you waiting for? Craft a strategy for mobile and solemnly swear to…

Download your copy of the mobile fundraising manifesto (PDF).
And if you thought it couldn’t get any better than that…

Use our FREE strategy canvas to create your next mobile fundraising strategy. 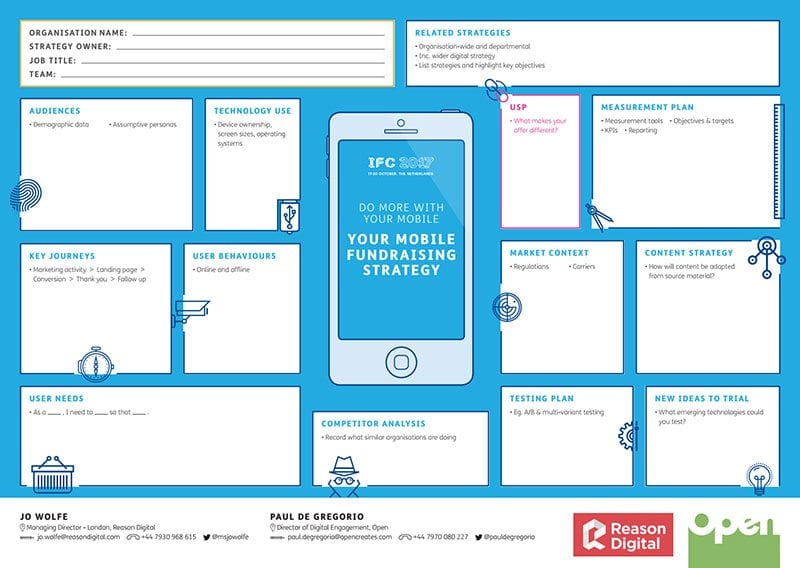 This beautifully designed tool will help you plan out a game-changing plan to make the most of mobile in your charity. Give it a go and feel free to tweet or email if you need any help!

Paul de Gregorio, Open
Paul is Director of Digital Engagement at Open, an agency based in London. He has worked with many UK and international charities and membership organisations including Cancer Research UK, ACLU, Humane Society of the United States, Amnesty International, Oxfam, Greenpeace, WarChild, The Labour Party, UNICEF UK, Save the Children and Friends of the Earth – to deliver fundraising and campaigning activity that inspires people to take action. Paul has been fundraising since 1996. Paul blogs here. And can be found on Twitter @pauldegregorio.
Jo Wolfe, Reason Digital
Jo is Managing Director for London at prosocial digital agency Reason Digital, overseeing their work with national charity brands. Jo has over ten years’ experience as a digital leader in the charity sector, most recently as Assistant Director of Digital for Breast Cancer Care. Jo created the Third Sector Digital Maturity Matrix, helping 800 charities understand their current digital capability and set goals for the future. In 2014, Jo was voted #1 woman in digital under 30 by The Drum. In March 2017, she was named one of 10 inspiring women in charity digital by Third Sector. Jo is a Trustee for Sadler’s Wells and a graduate of the CharityWorks programme. Jo blogs for Third Sector and tweets @msjowolfe.