One of the biggest beneficiaries was the American Civil Liberties Union (ACLU) which received $24m in donations over the weekend following the ban, in the form of 350,000 gifts. It successfully persuaded a Federal District Court Judge to issue a stay.

Nick Burne has shared his analysis of the mobile giving platform and content that helped ensure that ACLU could handle such a wave of gifts in what was effectively an emergency campaign.
In Just how did ACLU raise so much so quickly? ($24million in 48 hours this weekend) he highlights the role of: 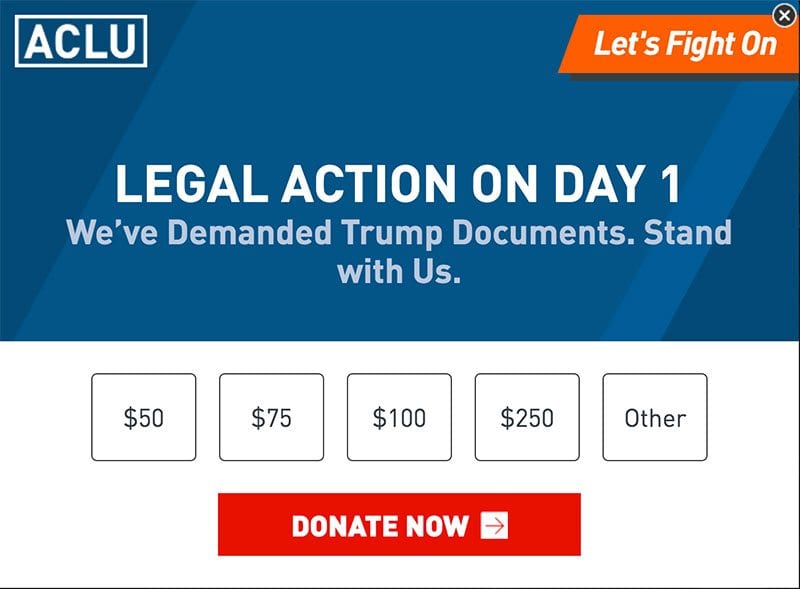 Some individual supporters set up their own campaign for ACLU, including one via Facebook Donate (available to US nonprofits):

Thank you @Mikisetlur, whose fundraiser for the ACLU has raised $825,284 and counting https://t.co/8rPcY5d62G

I know some have doubts as to Donald Trump's business acumen but you have to hand it to him. He's made a helluva lot of money for the ACLU.

$19.4 million since Saturday. Keep it up, America. @ACLU are the heroes we need to support. #MuslimBan https://t.co/qBpMb743D9

Actor Kal Penn reacted to a bigoted social media message by launching an appeal for Syrian refugees which has raised over $600,000.
He shared an edited version of the original message which he was told “you don’t belong in this country”. He announced that he had set up a crowdfunding campaign in the Instagram name of the person who he said had sent this message.
https://www.instagram.com/p/BP0hFvIBPkx/
Syria of course was one of the countries included in the Presidential ban.
The appeal was in aid of the International Rescue Committee.
$250,000 was donated within 24 hours, so he had to keep raising the target to $50,000 and now $600,000.

amazing. WE ARE ABOUT TO HIT $20K to refugees who love our beautiful country. ?? Raising the goal to $25K! https://t.co/NOR5P48fBi pic.twitter.com/a5j9ATWmoP

Using Nick Burne’s definition of this phenomenon, the fundraising totals for campaigns such as that for ACLU were further boosted by a number of offers of matched giving by celebrities and Twitter users.
Many came forward, unprompted it would seem, to offer to match a variety of different sums, in order to encourage others to donate.
https://twitter.com/Sia/status/825459576036220929

Thank you all for your support! https://t.co/4dpBiXIk8W

and i will match your 100K donation sia – #resist https://t.co/xkjVGeMWuR

Tweet a pic of your @ACLU donation to me and @sabaatahir, and we will match total donations up to $1,500!! ??? #Resist pic.twitter.com/XuMKufQ9IL

Actually, better yet send me your donation receipts for the @aclu TODAY & I will match up to $1000 https://t.co/1J8RTU9vYo… #RESIST

Triple your donation. Send your receipts to me too. I'll match to $25k. Thanks @sacca for taking the lead! https://t.co/B6TMltL2OB

Incredible! I'll match your donations to @ACLU in support of our LGBTQ immigrant family up to $10,000 through @TieTheKnotOrg. #NoBanNoWall https://t.co/Xv3ETmWJxI

1/ Inspired by @patrickc and others, I’ll also match $50k of donations to the @ACLU. Just reply with a screenshot of the receipt.

In Dec, @collision made a large donation to the ACLU—"they're going to matter". I wish I had. Will now match $50k. https://t.co/kbrh16NGV8

Okay: the amazing @natfriedman is *also* going to match $50k. (Even if he's not tagged.) So you get a 3X multiplier by donating now.

Wishing I could march at airports tonight. So instead, I'll match donations to @ACLU (up to $1000). Screenshot your receipt for me. And–GO.

After transportation company Uber did not distance itself from President Trump and his policy fast enough, rival company Lyft seized the opportunity. It did the right thing by announcing it would donate $1 million to the ACLU over the next four years of the Trump presidency. Of course, it knew it would benefit commercially from so doing, as Uber users started to close their account and delete the app.

There was even at least one opportunity to make signing up for Lyft raise funds for another nonprofit:
https://twitter.com/nicolettemason/status/825839341951791104
Google’s CEO has announced the creation of a $2 million fund for immigrant and refugee causes. It could be worth up to $4 million as it is inviting its staff to match it.
The funding will be donated to the American Civil Liberties Union, Immigrant Legal Resource Center, International Rescue Committee and UNHCR.

Many lawyers volunteered and turned up to air ports to provide free legal advice to families of those being held in detention as a result of the Presidential ban. They were not permitted access to the individuals in detention.

LITERALLY on the ground. Volunteer lawyers are working pro-bono on a Saturday preparing habeus corpus petitions for detainees at JFK. pic.twitter.com/ddUeQBi7AY

Got to give love to all the volunteer lawyers who have been offering their help since yesterday! #NoBanNoWall #MuslimBan #LawyerLove #NYC pic.twitter.com/o6zjAFgi4O

Other companies also offered support in a variety of different non-financial ways. In addition to providing some instant or long-term support, these were clearly designed to demonstrate to the public and to politicians that the company did not support what had by then become referred to as the #Muslimban. The President has criticised the use of this phrase as inaccurate.
• Starbucks has pledged to hire 10,000 refugees over the next five years. An open letter to staff from CEO Howard Shultz stated that the firm would:

“neither stand by, nor stand silent, as the uncertainty around the new administration’s actions grows with each passing day”.

“There are more than 65 million citizens of the world recognised as refugees by the United Nations, and we are developing plans to hire 10,000 of them over five years in the 75 countries around the world where Starbucks does business. And we will start this effort here in the U.S. by making the initial focus of our hiring efforts on those individuals who have served with U.S. troops as interpreters and support personnel in the various countries where our military has asked for such support.”

• Airbnb’s CEO and founder Brian Chesky offered free accommodation to those affected by the ban, saying:

“Airbnb is providing free housing to refugees and anyone else who needs it in the event they are denied the ability to board a US-bound flight and are not in your city/country of residence.”

https://www.facebook.com/brianchesky/posts/10154644618674930
It will use its disaster response tool to offer free housing to displaced people when needed.