Facebook is no stranger to fundraising; the original ‘donate’ button that Facebook launched in the US in 2013 was clearly designed with charities/non-profits in mind. However, results in the UK have been disappointing thus far.
One major animal charity recently shared its experience of trying the donate button on its Facebook page, revealing that on a UK Facebook page with over 400k likes and +1,000 new likes in a single week, the “Donate Now” button received just 27 clicks and generated no donations in the first month.
This underwhelming performance is perhaps unsurprising given that most people consume content via their own feed rather than on an organisation’s page, and that donate buttons that aren’t connected to emotive content generally underperform. GiftAid issues, too, have forced an ugly compromise for UK charities, preventing in-Facebook donations and offering a clunky, uninviting default message: “Not endorsed by or affiliated with Facebook”, which simply redirects users to a charity’s own donation pages.
So, do all these barriers mean that the Facebook Donate button will never be a success? Hopefully not.

We are already seeing new functionality being trialed in the US that allows charities to include a ‘call to action’ (CTA) at post-level in order to make donations both quicker and easier. This change, combined with recent rumours that Facebook may have worked out how to handle Gift Aid in the UK – and that that one-click donations may well be on their way to the UK too – means that Facebook’s donate function may end up being very valuable after all.
The possibility of Facebook adding ‘tip jar’ functionality makes this area even more interesting still. This model, which allows users to make instant micropayments, has traditionally been aimed at publishers who are looking for ways to monetise their content, but it could also create opportunities for fundraisers who can use emotive, premium content to gain ‘tips’.
Tip Jar was not designed with charities in mind, but the opportunity for charities to use this functionality could be sizable. After all, paid Facebook adverts weren’t designed with charities in mind either, but have proven to generate substantial ROI for regular giving and event sign-ups. We’ve seen this be particularly effective for campaigns like Dryathlon, where the entire experience of the campaign exists online, and the ability to target users by location and demographics leads to strong conversion rates. 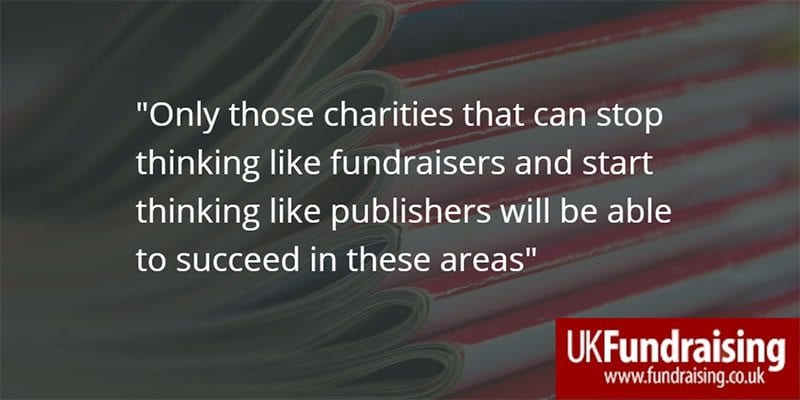 However, only those charities that can stop thinking like fundraisers and start thinking like publishers will be able to succeed in these areas. Further efforts will need to be put in to understanding what types of content, what tone of content, and what frequency of delivery will encourage donations and other support – and this may be substantially different from content that is successful at generating likes and shares alone.

Manifesto’s research with Unicef UK found that people have stronger emotional recall about petition actions than donations, and will often share the former, but almost never the latter. This sharing is not simply about getting more people to sign the petition – it is a way for people to raise awareness of issues they care about whilst simultaneously reinforcing their own self-identity.
This is clearly a relationship based around reciprocation: I’ll sign and share your petition in exchange for publicly self-identifying as a champion for X and influencing others to think like me. It stands to reason, therefore, that this type of content may also be useful for encouraging visitors to make a donation.
However, in order to elicit this type of reaction, it’s vital that the content must be something the audience can deeply connect with. Charities must also understand that it is crucial that posts are relevant, timely and targeted to specific audiences, in order to increase trust and support.
The new initiatives we’ve been seeing in this space demonstrate how social platforms are providing new opportunities for charities to connect with both volunteers and donors. Fundraising organisations will need to find a way to tap into this potential, but first must consider the broader role that social media can play in their communication and fundraising strategies.

Jim Bowes is CEO at Manifesto and Julie Dodd is a Digital Strategist and Consultant.

Online fundraising and donation – which service to use