In the past, the term RILAB (Run It Like A Business) symbolised activity in the charity sector. It was a way of getting charity leadership, trustees and management to become more business-like in the ways they ran their organisations and conducted charitable business.
For that to work, they needed to be more accountable, efficient; and demonstrate real value to donors, governing bodies and the wider public. ‘RILAB’ created major leaps forward in organisational design and conduct, custodianship, professionalism, fundraising strategies, marketing, brand development and the ways in which accrued funds were distributed and accounted for. But it didn’t last.
The problem that no one saw coming was that, instead of charity leaders “Running It “Like” a Business” in the minds and perceptions of donors and others, many have instead begun to run their organisations “AS” businesses. As a result the charity sector has become indistinguishable from the corporate sector, and the recent slating of charity fundraising activities has pushed feelings to the front of public consciousness that have been in our subconscious thoughts for years.
The charity market (if I can call it that) is overheated, overcrowded, transparently competitive, and overly marketed. There are simply too many messages and campaigns out there, too many disparate pleadings and too many causes that make us feel bad about not supporting them. Currently, people are thinking more about the charities themselves, because thinking about the causes is too much. In the good old days of direct mail potential donors would receive materials depicting a poverty stricken child, a maltreated dog or a tortured soul. Now they see a logo that represents a business – and make the wrong associations with that logo. They used to see fundraising, now they just see marketing noise. 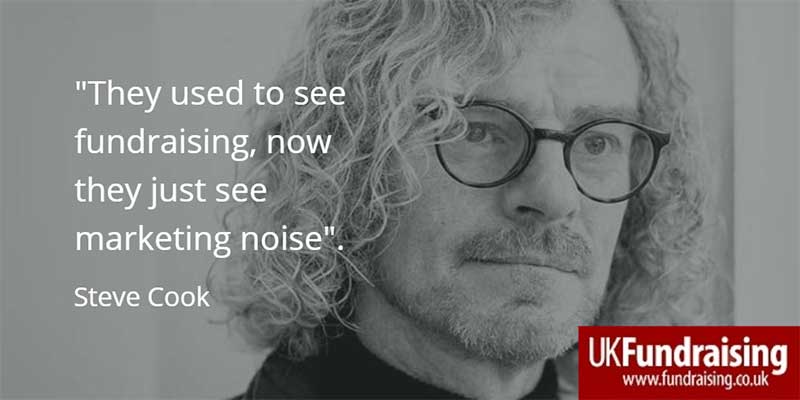 And because we think of charities as businesses, we assume that they are like businesses in all the wrong ways – self-serving, competitive, and commoditised (as if you can commoditise suffering) and, in some cases, a bit grubby. As a result, there is a growing ‘us and them’ mentality emerging between charities and the public that is akin to the business/customer relationship in the corporate world. Donors simply fuel the ‘corporate’ machine.
I know that some reading this will be angry by now, but the simple truth is that charities need to start being charities again. In fact, given the shocking state of the charity sector at present, charities need to re-define what ‘charity’ actually means. They need to completely re-evaluate the relationship between the charity, the donor (lose that word, right now) and the recipient in order to make each and all of these essential components feel part of something important, together, as a true movement for self-improvement: a mutually beneficial co-operative that gives everyone a sense of belonging.
It is ironic to me that the corporate sector is wrestling with how to achieve higher value in customers minds, how to be more ‘authentic’ how to deliver more inclusive and rewarding customer experiences, how to create a paradigm shift in the way they operate and, in some cases, venture into highly worthwhile alternative capitalism. They are trying to manufacture higher value. Meanwhile, the charity sector has lost its way, lost its meaning and lost its authenticity, even though it has a genuine, bona fide, authentic higher value already.
Businesses were, are and always will be businesses. It’s time charities remembered how to be charities and re-define what charity actually means to people. It’s time for leaders, trustees and all the incredibly innovative, driven people that populate the charity sector to address the value of ‘charity’ and its relationship with people.

Steve Cook is a senior brand strategist who has worked on campaigns such as Oxfam’s ‘Be Humankind’ and hospice’s ‘End of Life Care’  Since 1999 he has created, evolved and applied his methodology ‘Brand Conduct’ for defining and integrating future state brand strategy, organisational design and culture change, business strategy definition and competitive advantage. Steve describes these higher ideals as ‘Brand Virtue’ – the definition of an organisations future facing vision for itself and the way it wishes to be seen by the world. Brand Virtue informs an organisations brand conducts and the brand strategies that make it real, changing and valuable.

How good is your ‘elevator pitch’?

When should a charity sue?