UK Fundraising has been publishing photos covering all aspects of fundraising on photo-sharing site Flickr.com for 10 years this month.
The site now hosts 4,914 of our images, all arranged in 122 albums.

They also include photos taken at some of the many conferences, training events and launches that we have attended and reported on, such as:
• International Fundraising Congress 2008
• JustGiving Awards 2012
• Launch of the first Giving Tuesday UK 2014
• MuseumCamp 2013
• Poppy Appeal launch 2010 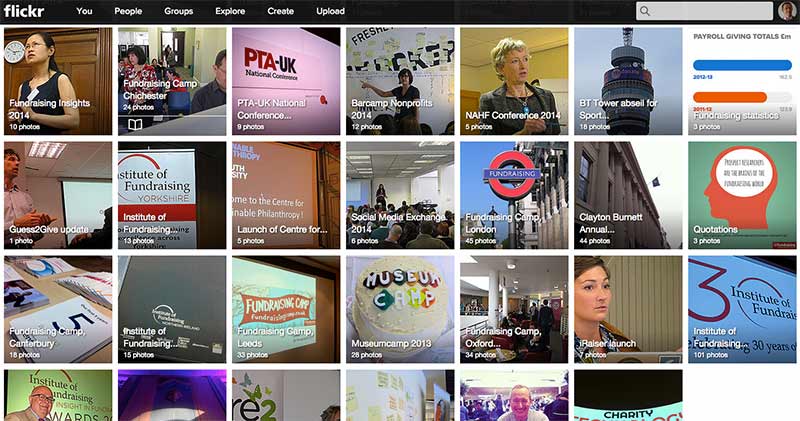 We also feature photos from some of our many events and conferences, including:
• Perfect Pitch (June 2005)
• Fundraising Camp Oxford
• and our many fundraising training courses

Fundraising activities are all around us. As a result, we’ve even shared fundraising content spotted on our holidays:
• Sidmouth Donkey Sanctuary, Devon
• Isles of Scilly

We publish photos on Flickr for three reasons:
1. for UK Fundraising to use
2. to share interesting or useful examples of fundraising activities
3. so that others can share this fundraising content. All our photos are published under Creative Commons (Flickr is probably where we first came across this sensible way of licensing content for sharing). This means that other people can use and embed our content on their websites at no charge, provided they credit us and link back to our original content on Flickr.
We have also donated many of our photos to Photofoundation, so that they can be used by other charities, and can generate income for charities when purchased by a for-profit organisation.

There are of course many images about fundraising online, including other social channels. For example, we use Pinterest to curate many other fundraising images, some of them our own, but most of them created by others.
Most other image collections though tend to focus on particular charities, fundraising appeals or events. But we haven’t found an image collection that has been published over so many years and which covers not just fundraising campaigns but also some of the developing trends, channels and key sector-wide events.
So, do explore UK Fundraising’s photo collection on Flickr.

Pushing the envelope for the National Literacy Trust