December is the most important month for most fundraisers in terms of the amount of income that can be raised. Here are just some of the many ways in which charities are trying to raise funds this year.

1. Ask your supporters to volunteer their time or skills

Marie Curie is asking its supporters to get involved with a bag pack at Morrisons supermarkets as part of the multi-charity ITV Text Santa campaign. They’ll be inviting shoppers to make a donation in return.

The supermarket will benefit too on what will no doubt be a very busy shopping weekend: with bag packing help, they should be able to serve customers faster and perhaps serve even more customers.
vInspired has a list of volunteer opportunities this Christmas.
How can your supporters be useful or helpful, and generate some funds for your charity?

Climate Stewards’ Twin Your Tree for £10

Environmental charity Climate Stewards is inviting supporters to ‘link your Christmas tree to a tree in Ghana’ for £10. This will help fund a tree planting programme in Ghana starting in March 2015. Your Christmas tree might have been recycled by then, but donations will help its ‘twin’ start removing CO2 from the atmosphere. Supporters will receive a report and photos of their twinned tree.
Any item can be twinned it seems: even toilets can be twinned to raise funds!
Thanks to Simon George of Wootton George Consulting for this one: his company makes a donation to Climate Stewards for every new contract it wins.

NSPCC has declared 10 December as its first Bobble Hat Day. Wear your bobble hat to work or school, and donate to NSPCC for the privilege and fun of doing so. Simple.

Excited to support the first ever @NSPCC #BobbleHatDay on 10 Dec! Check out this link and be a bobble hat hero too http://t.co/FZ1KifXrEc

Other charities have similar campaigns too of course:
• After Adoption is holding its Christmas Jumper Day on 12 December 2014. Wear your novelty Christmas jumper with pride and make a donation to the charity that helps all those affected by adoption.

After Adoption fundraisers Atiyah and Jo wearing their Christmas jumpers for the charity’s Christmas Jumper Day.

4. Use the #elfie hashtag

The Elfie Selfie campaign by the North East Autism Society in 2013.

There’s life in the fundraising selfie yet, despite its doom already being predicted. The Christmas #elfie surfaced last year when Plan UK raised nearly £1,000 from the campaign. Other charities have used it too including the North East Autism Society with its #ChristmasElfie variation, and now the Laura Crane Trust:
https://twitter.com/PamThornes/status/539420295321624576
So, expect a large amount of competition around this hashtag.

Advent Calendars can prove a particularly useful tool throughout December, or at last for the 24 days until Christmas Day, as, if the content is engaging, you can persuade people to return once a day for their daily dose of humour, information, free gifts or whatever you choose to offer.
The Church Urban Fund’s Advent Calendar this year offers daily video, reflection and prayer – but you are invited to part with your email address so that the charity can email you the latest offering.

Today is #GivingTuesday & I am doing it for @malarianomoreuk pic.twitter.com/cJmkr71VBU

Although Giving Tuesday takes place at the beginning of December, it is likely to resonate further into the month, especially in the UK where it is being promoted for the first time this year. A wide range of fundraising campaigns will be run around the theme by large and small charities. Keep an eye out for campaigns that inspire you and that you could adapt for next year.
We found six ways in which charities made the most of Giving Tuesday.

7. Apply to be a newspaper’s Christmas appeal partner 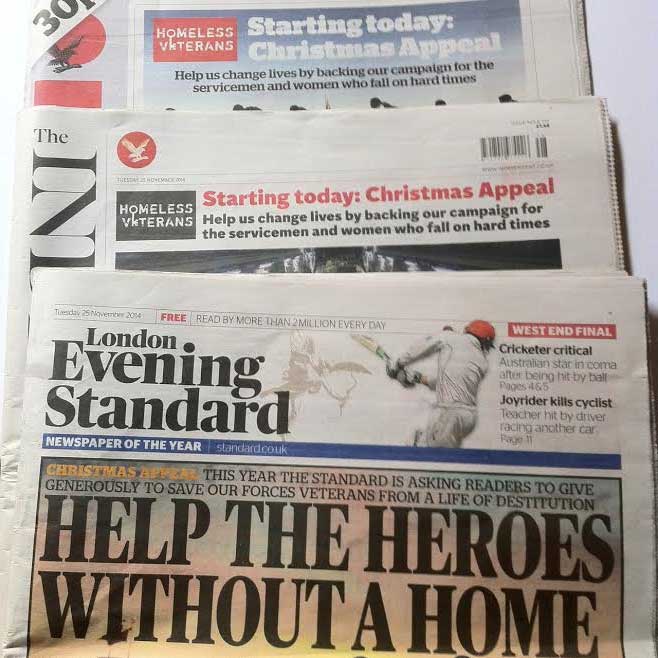 2014 Christmas appeal by The Evening Standard, The Independent and The i.

Many newspapers and radio stations, both national and local, run Christmas fundraising appeals, inviting their readers or listeners to donate. The beneficiaries are mostly decided by a staff vote or in a staff committee.
It’s too late now of course, but plan to look out for deadlines for applications to be a media company’s charity of the year. Don’t be surprised that some of the bigger ones have exacting requirements from their would-be partners in terms of how much staff time they can devote to the partnership. Don’t be put off though – look at the smaller titles or organisations and see if you fit their criteria.

8. Make the most of the week after Christmas

Some people are lucky enough to take off the whole week between Christmas Day and New Year’s Day.  For some that means an unusual amount of spare time.
So, why not give them something to do to help your charity? A bracing Winter sponsored walk perhaps? An even more bracing dip in the sea on Boxing Day morning?
This period has been named Twixtmas by some and here are five good deeds that the public was encouraged to do during that period in 2009. How can your charity make the most of Twixtmas?

The NSPCC cleverly created a profile for Santa Clause on LinkedIn – with a bit of support from LinkedIn themselves. And look who Santa works for when he isn’t Managing Director of Christmas? It’s humorous and promotes the charity’s Letter from Santa fundraising campaign.
No, Santa or his elves have bagged the other obvious account names on Twitter and other social media. 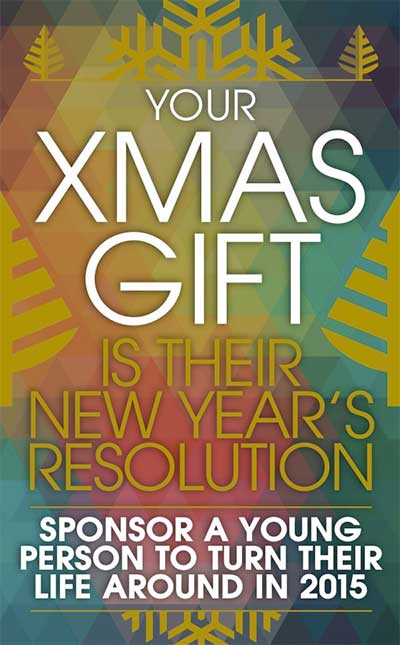 The Dallaglio Foundation is inviting Christmas gifts to support its RugbyWorks programme which gives young people the motivation to remain in education and get them ready for employment. “Your Christmas gift is their New Year resolution” says the campaign.
Not everyone wishes to undertake a New Year’s resolution that involves self-denial or lots of physical exercise. Helping someone else achieve their New Year’s resolution is therefore a novel offer.

Decembeard is running a month-long campaign. It’s not directly Christmas-related, but you can’t help missing the link.

Despite pressing local and global issues, you can still make people laugh while you ask them for money. Here is Save the Children’s advert featuring comedian Harry Enfield in a spoof of a TV advert, promoting the charity’s Christmas Jumper campaign.
Save the Children will receive double the value of donations to this campaign: the UK government will double the value of every donation made to this Christmas campaign.
[youtube height=”450″ width=”800″]https://www.youtube.com/watch?v=gnqPMwuGEok[/youtube]

13. Not everyone gets a happy Christmas

On the other hand, Christmas can be a very tough time for many people, and animals. The RSPCA for example knows that they will receive an influx of unwanted animals and animals that have been abused.

14. Accept unexpected presents for your fundraising

Lendwithcare were the recipient of an unexpected gift from a supporter. Julian Bashford was keen to share the impact of what they achieve, but thought they didn’t have the right content. As a result they now have an animated Christmas advert promoting their work, free of charge, and produced by Woods Film.
He wrote to Care International saying “myself and my friends at Woods Film are giving Lendwithcare an animated advert. It has cost them nothing, and as you fund Lendwithcare, it has cost YOU nothing. But it is YOUR film. Use it. Share it. Like it. Tweet it. Pin it and Google+ it.”
He also managed to persuade “a very well-known British actress has given her time, free of charge, to support the film. She believes in microfinance and was only too happy to come along and record the voice over for the price of a cup of tea!”
[youtube height=”450″ width=”800″]http://youtu.be/OxjyblfkGMM[/youtube]

15. Sell a calendar for the new year

Plenty of charities sell calendars at this time of year, or benefit from sales of calendars by other publishers or companies.
BBC Children in Need is selling a calendar featuring actors from EastEnders:
[youtube height=”450″ width=”800″]https://www.youtube.com/watch?v=y3Fa0-IQkcA[/youtube]

17. Prepare supporters for your Christmas appeal

Given the large number of charity appeals in December and around Christmas, you need to make yours stand out. Just one ask isn’t enough: prepare your supporters, and the public, for the ask that is to come.
One good way to do this is to show them the impact of what you do, and ideally get a beneficiary to do that for you. Here is a letter doing just that, showing just how valuable the income from the BBC Radio 4 Christmas Appeal for St Martin’s in the Fields

A thank you from a beneficiary who received a grant from the #R4XmasAppeal. Spread the word http://t.co/T0G9YCwcwq pic.twitter.com/hK4lkMraXk

Tomorrow marks the launch of the 88th #R4XmasAppeal Join us so we can be there for even more people in need this yr pic.twitter.com/o4YvI9ZNyc

Interestingly, St Martin’s in the Field has created a dedicated social media account for the Christmas Appeal – @SMITF_Christmas. Normally, this is not necessary, but St Martin’s does have a long track record and the prominent support (for the past 88 years!) of the BBC behind its Yuletide fundraising campaign.

Make the most of The Big Give’s Christmas campaign. This needs planning and activity several months before, to prime donors to make their donations when the campaign opens in December. Qualifying donations are doubled.

Christmas is a time for stealing as well as giving. The public needs to be aware that some people will try to collect ‘for charity’ and keep them money for themselves.
The Charity Commission has issued a video with advice on safer giving at Christmas:
[youtube height=”450″ width=”800″]https://www.youtube.com/watch?v=AVPALcw8X4Y[/youtube]
and has teamed up with the Fundraising Standards Board to promote safer giving with the #SafeXmas acronym.

Normally no charity would fundraise on Christmas Day, not least because you couldn’t: no mail deliveries, no telephone agencies likely to be staffed etc. And, many would argue, you shouldn’t as it is a religious holiday.
But, plenty of for-profit organisations carry out direct marketing on Christmas Day, well aware that people are using their mobiles and are active on Facebook and other social media channels while they are enjoying the Christmas break. People shop online on Christmas Day.
JustGiving points this out in a recent blog post, Maximising charity donations at Christmas. It features Facebook posts on Christmas Eve and Christmas Day from Oxfam, Dog’s Trust and Centrepoint. None of them were direct asks for money – they were thank you messages and messages of Christmas greetings.
Of course, you don’t have to be in the office on Christmas Day posting these messages. They can be scheduled. Just ensure that you can cancel any scheduled messages should the need arise.
Will you send a Christmas message to your supporters on Christmas Day?

In Fears for Tears: what happened to charities at Christmas? Joe Saxton at nfpSynergy asks whether at Christmas charities have ceded the ground of powerful, impactful and emotional fundraising adverts to the corporate sector.
Tips for last-minute Christmas fundraising – my guest blog post for Pilotlight.
The Institute of Fundraising is running The 12 Fundraising Tips of Christmas, an Advent Calendar style series of fundraising tips on video and in text, a different one each day.
The Alternative Christmas List – a look at some of the best alternative charitable Christmas gifts this year, by Cause4.