The Royal Wedding of HRH Prince William and Kate Middleton on 29 April is the opportunity for plenty of fundraising.
Here are some of the initiatives we’ve spotted. What have we missed? Let us know in with a comment below.

The couple have themselves urged those who wish to recognise the occasion to make a donation to a list of recommended charities. She notes that “most striking is that most of them are little-known”, and “none of them are the ones of which Prince William is patron”.
She laments that “No rationale is given publicly for the choice of those charities. This is a shame because (a)then we don’t know, and (b)they probably have done some due diligence on the charities and there’s an opportunity to show other people how that’s done”. She hopes that “Maybe they’ll report after a year or so on the impact that the wedding gifts make.”

SEE ALSO: How can we help the royal wedding feel-good effect positively impact regular giving? (7 May 2018)

Caroline Fiennes has commented on their choice at Charitable gifts for the Royal Wedding: analysis of the plan.
Hitwise UK reports that visits to the gift fund website have increased by 200% in the week to 16 April 2011, making it the 24th most popular website in its Community – Humanitarian category, “and the fastest moving charity website”.

CharityGreetings.com has set up www.royalweddingcards.co.uk from which you can buy and send a charity wedding card to the betrothed couple. Each card will generate funds for Dream It! Believe It! Achieve It!, an initiative by the Disabled Sport Development Trust to enable paralympians to compete at the 2012 Olympics in London.

The company has also carried out research that found that “more people in the South of the UK will watch the royal wedding on TV than those in the North”. According to Southerners proven to be more ‘royalist’ than those in the North in Physis Daily News, “the survey conducted by Charity Greetings showed that 43.7% of those living in the South will be celebrating Prince William and Kate Middleton’s wedding, compared to only 19.4% in the north”.
Light blue touch paper and retire…

The Royal Wedding falls within Save the Children Week so the charity is making the most of this by backing the Prime Minister’s calls to the public to organise celebratory street parties and for local councils to approve them. Of course, Save the Children are encouraging party organisers to use the events to raise funds for the charity.
They have asked top party planners and celebrities to help create a free downloadable party pack to make these parties a success. Organisers don’t even need to collect a donation: they can invite guests to pay an ‘entry fee’ by texting PARTY to 70555 and donating £5 to Save the Children. The pack includes a ‘Pin the tail on the royal corgi’ poster game.

If timing isn’t apposite, then you can always change your schedule to fit in with the Royal Wedding. That is exactly what Centrepoint seems to have done.
According to Third Sector’s Centrepoint times website relaunch for royal wedding week, “the youth homelessness charity Centrepoint has brought the relaunch of its website forward to tomorrow so it can mark this week’s marriage of its patron Prince William to Kate Middleton. The charity had originally intended to unveil the new-look site in the summer, but moved the date forward to coincide with the royal wedding and to capitalise on public interest.”

Set up a topical JustGiving page

The Children’s Trust have created an appeal on JustGiving called The Royal Wedding Fund. Because they could. Target? £1,000. “We know lots of charities have benefitted from the Royal Wedding”, says the Trust, “and we would like to ask our supporters to donate just £2”. A good example of taking any opportunity to fundraise.

“There are two great marriages to celebrate this April!”. Thus Shooting Star CHASE children’s hospice have linked their recent merger with the impending Royal merger. Their Royal Wedding Campaign aims to raise £10,000.
They are offering a fundraising ideas pack, a poster to advertise your Royal Wedding-themed fundraising event, and a Royal Wedding quiz.

The Zoological Society of London (ZSL) is inviting anyone with the name ‘Will’ or ‘Kate’ to claim a free day out at ZSL London Zoo or ZSL Whipsnade Zoo to celebrate the Royal Wedding. The invitation applies from Friday 29 April to Monday 2 May.
www.zsl.org/zsl-whipsnade-zoo/news/will-and-kate-get-a-free-wild-date,798,NS.html

Other Wedding participants have a charity too

There are plenty of participants in the Royal Wedding apart from the two principals. Units of the military for example are taking part, and they too have their charities.
Vir2 encouraged people to “spare a thought for the Household Cavalry” on duty on the day by texting HCAV to 70300 to give £3 to their operational casualty fund.

Some charities were still fundraising on the day and during the event.
Contact A Family tweeted: “Enjoying the day off? Enjoying the #RoyalWedding? Why not harness that fuzzy feeling and donate what you can to us!”

In Royal wedding video to be sold for charity, The Deccan Herald reports that “television footage from the British royal wedding of Prince William and Kate will be made into a DVD, proceeds from which would go to charity. The proceeds from DVD and computer download sales in Britain, US, Canada, Australia, France and Germany will go to The Foundation of Prince William and Prince Harry.” 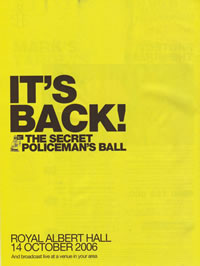 The Secret Policeman's Ball is back

Greatest show on Earth is great showcase for charities

How we built the Gromit Unleashed brand