Attend the World Cup Skiing in Italy and benefit charity
The new and unique online auction site www.buyoncegivetwice.co.uk has opened up the bidding on their first philanthropic lot to be recycled on the site. The site helps organisations by simply recycling luxury auction lot ‘waste’ at no cost to the charity.
The lot comes from JDRF (Juvenile Diabetes Research Foundation), one of the partner charities of BuyOnceGiveTwice and consists of a three day trip to the Italian Alps to watch World Cup Skiing, complete with stylish accommodation and flights for two. However, this lot is unique as it is in the company of Hothouse Productions who are filming for Channel Four. The trip is to watch the Men’s Finals between March 13th – March 16th and the winning bidder will also have the opportunity to ski.
As this lot comes straight from the charity JDRF receives 90% of the resale value. The closing date for bidding is 28 February.
For further information of this lot and BuyOnceGiveTwice, please visit www.buyoncegivetwice.co.uk.
– ends –
For further press information and photography, please contact:
Emma Walton, Walton Public Relations, 86 Roman Way, Bourton-on-the-Water, Cheltenham, Gloucestershire GL54 2HD. Tel: 01451 821800 Mobile: 07515 357842 Email: [email protected]
www.buyoncegivetwice.co.uk
Notes to Editors:
• BuyOnceGiveTwice is the brainchild of Mia Woodford and Emma Leschallas, who spotted the potential of wasted lots after raising £500,000 at a single auction at the Cura Ball.
• When a charity holds an auction, its supporters pay thousands of pounds for a luxurious and often unique prize. However, frequently the supporter is busy and does not have time to redeem their prize.
• Through BuyOnceGiveTwice, the prize is recycled making more money for charity.
• BuyOnceGiveTwice uses the remaining 10% of the monies received from sales to cover the costs of running the site.
• There is no cost to the charity to auction or re-auction lots.
• The funds received by the charity from the auctions are unrestricted. 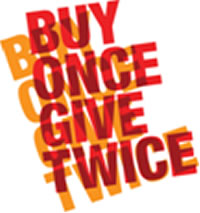