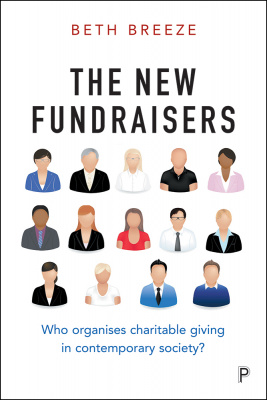 The New Fundraisers: Who organises charitable giving in contemporary society?

Charitable fundraising has become ever more urgent in a time of extensive public spending cuts. However, while the identity and motivation of those who donate comes under increasingly close scrutiny, little is known about the motivation and characteristics of the ‘askers’, despite almost every donation being solicited or prompted in some way.

This is the first empirically-grounded and theorised account of the identity, characteristics and motivation of fundraisers in the UK. Based on original data collected during a three-year study of over 1,200 fundraisers, the book argues that it is not possible to understand charitable giving without accounting for the role of fundraising.

The study was funded with a grant from the Leverhulme Trust.

One of many fascinating findings from the research is that fundraisers are more likely to be members of choirs than the general population.

“The New Fundraisers successfully argues that in order to understand charitable giving research efforts must broaden their perspectives beyond the donor. For fundraising practitioners, this book moves beyond the ‘‘how-to’’ genre and encourages reflection on the impact of fundraising. For researchers, the book contributes new empirical data based on the experiences of UK fundraisers and offers the theoretical development of fundraisers as creative professionals.”

“Few people ‘get’ donors and fundraisers like Beth Breeze. Her encyclopaedic knowledge combines with thorough professional analysis to provide an indispensable resource for the entire voluntary sector.”

“This book provides an important insight into the way fundraising actually works. In doing so Beth Breeze nails the lie that fundraisers force people to act against their will.”

Dr Beth Breeze co-founded and now directs the Centre for Philanthropy at the University of Kent, where she is also a senior lecturer in Social Policy. She worked as a fundraiser and charity manager for a decade before moving into academia where she conducts research and teaches courses on philanthropy and fundraising. She has written the annual Coutts Million Pound Donor Report since 2008, co-authored Richer Lives: why rich people give (2013) and The Logic of Charity (2015), and co-edited The Philanthropy Reader (2016).

She won the AFP/Skystone Partners Research Prize in 2018 for this book.

WATCH: the New Fundraisers – what kind of people raise money for good causes?