What are the largest lottery prizes to go unclaimed? And whose vast sums are then redistributed to other beneficiaries such as charities or the state?

Every now and again we hear about a massive National Lottery sum that has gone unclaimed because the winner has not come forward. There is usually media coverage letting us know the town in which the ticket was bought and the deadline by which the winning ticket must be presented in order to claim the prize.

But what are the biggest unclaimed lottery prizes? The biggest what-ifs?

The largest jackpot to go unclaimed was from a Florida lottery in the USA. A $369.9 million prize was won by a ticket bought in Bonita Springs, Florida in January 2020. If the money is not claimed in the allotted time (between 180 days and a year in the US), the prize will expire and the cash will go to the state to use as it sees fit.

The UK’s biggest unclaimed win was from June 2012, when a Euromillions prize worth £63.8 million was never picked up by its unfortunate owner. The ticket was bought in the Stevenage or Hitchin areas of Hertfordshire but, after the allowed time period to claim expired, the money was distributed among charitable causes.

At the other end of the scale, here, according to PartyCasino, are the largest lottery wins in the world to date. I’ve no idea if the recipients donated any of their winnings to one or more nonprofits.

The biggest lottery jackpot win ever took place on 13 January 2016, when three couples in the USA shared a total prize pot of $1.586 billion in America’s Powerball game.

Meanwhile, the largest ever single-ticket jackpot winner was also in the States, when an unnamed South Carolina resident took home $1.537 billion courtesy of the Mega Millions lottery in 2018.

The real problem with big lotteries

The new City Business Library at Guildhall will open on Monday 15 February 2010.

How do donors choose charities? 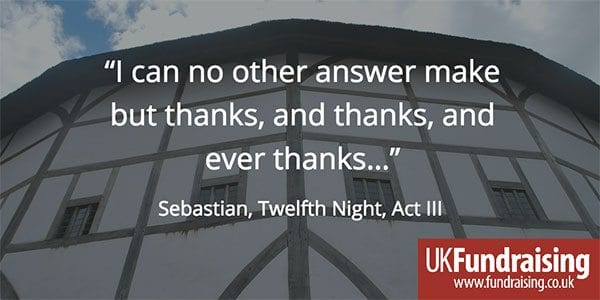 Commission on the Donor Experience: thanking and welcoming