Cancellations of regular Direct Debit donations returned to normal levels in April, but new donor sign ups were down by more than 50% year on year.
New figures from Rapidata show that charities in the UK saw cancellations of regular Direct Debit donations return to a more usual level of 2.04% last month, while the number of new supporters signing up to regular giving in April remained low at 54% lower than the same month last year. 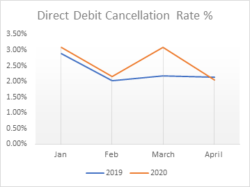 Cancellations had risen to 3.09% in March, compared to 2.19% in March 2019. The charity Direct Debit cancellations rate for March 2020 was the biggest swing from February to March seen since Rapidata’s recording began in 2003. However, it still remained significantly lower than the highest ever rate for the same month, recorded during the 2008/9 recession at 4.33%.
Scott Gray, Rapidata lead and head of payments for The Access Group, commented on the figures:

“It is with some relief we are able to report that the charity Direct Debit cancellation rate has swung back to its usual trend line and that the significant jump recorded in March does appear to have been a direct response to the Covid-19 situation.
“April’s cancellations rate of 2.04% is in fact slightly lower than April 2019 at 2.13%. This is likely reflecting a combination of settling into life in lockdown, with the majority of regular supporters having already made their decisions whether or not to change their regular giving practices during the month before; and significantly fewer new regular supporters being signed-up, leading to less first month attrition being recorded.”
“Numbers of new regular donors signing up are currently low, but this is no surprise while key fundraising channels like face-to-face remain out of action. It is heartening that the majority of committed regular donors have maintained their support and that regular giving remains a strong and stable income stream for many charities.”

“The long-term support and commitment from people giving regular gifts is so important for charities to be able to deliver their work, so it is pleasing to see that the cancellation rates for direct debits has come back to normal. Over the last month or so we’ve seen fantastic one-off giving to fundraising appeals, and some special events such as #TheBigNightIn and the 2.6 Challenge, which demonstrates just how the public do want to support good causes. Over the coming months, we hope to see the number of new Direct Debits rise as charities adapt their fundraising activities and coronavirus recovery begins to take hold.”