“What does a fundraiser do?” was the standard question I was fired at during a Twixtmas party. Most professional fundraisers are so used to this question that we don’t even have that nervous twitch anymore. Sure there is a 50% chance if someone is answering that they may receive their news from the Daily Mail but it doesn’t matter. We are professional fundraisers and we can blitz this particular question.
It’s OK that lots of people think our jobs are easy, we can just focus on getting our jobs done. Few of us are here for the glory.
The rise of crowdfunding hasn’t helped this perception though. From Grenfell to Notre Dame, church roofs to community centres, last-ever holidays to life-saving surgery. The relatively rare, highly successful public crowdfunding campaign can make fundraising look easy.
Of course we know that they aren’t representative. You can’t crowdfund for 10 years worth of social care for a severely disabled child. You can’t crowdfund once a year every year to keep a women’s shelter active. You can’t trust the ability to market a crowdfunding page as a method for selecting the best medical research to invest in.
Crowdfunding has less oversight, regulation, consideration around effectiveness than traditional fundraising and this is very much a double edged sword.
As a professional fundraiser I always avoid denigrating any fundraising towards ‘good’ causes. I feel I am an ambassador for the profession and I try not to let my very strong opinions on the pecking order of worthiness come through. I’d rather people spend their money on causes I deem to be less worthy than at Louis Vuitton so best not grumble when asked about such a cause.
Occasionally this differs though and I feel the need to explain why I am concerned about a particular direction of funding. I’ll try and argue devil’s advocate with myself to provide some balance and often I’ll suggest a similar cause that I feel are better directing funds from what I have seen.

This surfaced most recently when I was walking around in the Clifton area of Bristol. A friend asked why I was walking with purpose to a supermarket window. I got out my phone, slammed it in the window and walked off. I’d made a contactless donation. She followed up with ‘That was nice, do you do that everywhere you see it?” – Nope. Just that I’d walked passed a few homeless people in the city that day and wanted to do something about it.
I feel this is a metaphor for selecting a registered charity over a crowdfunding campaign. The homeless person would directly get my money. I would get an immediate thanks from the beneficiary. I would be more visible to my peers (walking around the city) in my donation.
In contrast, donating to a national homeless charity isn’t as reactive, I have given them no way to contact me and thank me for my donation or explain how it will help. I have donated because I know how well governed the cause is and that my donation, as a small drop in a sea of fundraising is a more considered way to impact not just the homeless people I have seen, but also those who I’m not walking past.
I feel this idea about considering the impact of your donation is slowly increasing and this is something crowdfunding is starting to help with.

“Bung a bob for a Big Ben bong”

When reading about the plan(s) to raise £500,000 to have Big Ben Bring in Brexit I was instantly disappointed … until I read the response it was having. It may be the first thing to happen in the Brexit debate that everyone seems to agree on. It’s a waste of money. Trawling through Facebook comments I can see ‘I voted leave but…’ and ‘Honestly, is this what we are…’ . Both sides of the aisle are finding it hard to justify this cost. 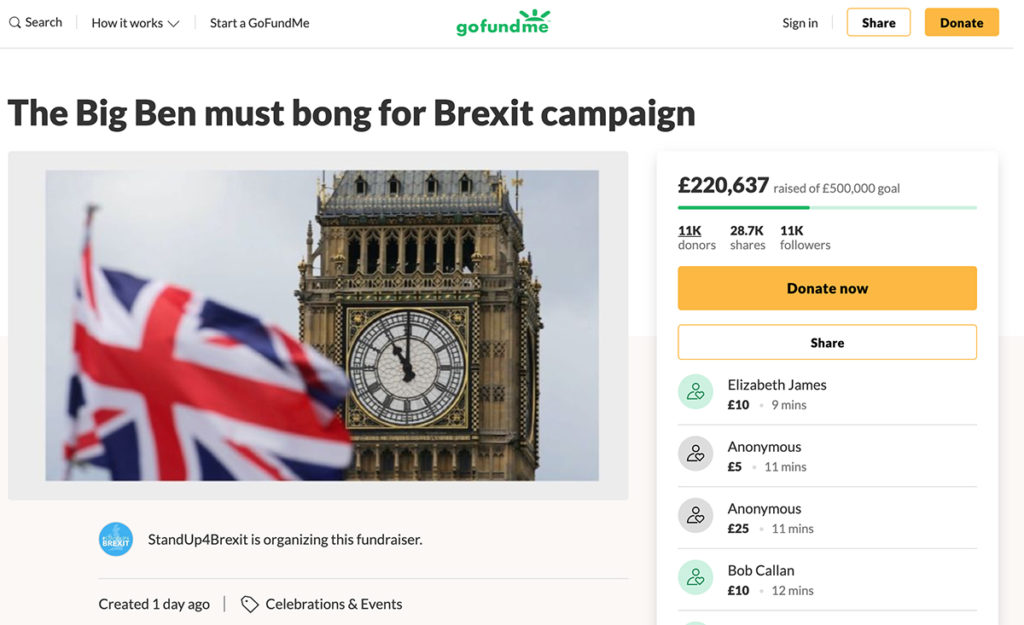 It’s not the first crowdfunding campaign that has motivated political responses but it seems to be one of the best. The more cases of ideas people disagree with that get picked up as a crowdfunder, the better the public perception of impact of fundraising will become.
So as you read that the Big Ben must bong for Brexit campaign has hit its goal (if it does, it’s on £220k of its £500k total as I write this) don’t despair at the impact that money could have on the needy. Rest assured that the nation is watching and attitudes towards where donations should go are shifting.