An interview with Lord Grade, Chair of the Fundraising Regulator, was given front page headline status in Saturday’s Daily Telegraph. He again shared his own views on ‘charity pens’ and enclosures, on charities that had not responded to the Regulator’s approaches, and on the fees charged by JustGiving.
Headlined “Charities dodge begging ban”, equating professional fundraising with begging, the interview by Chief Political Correspondent Christopher Hope focused on Lord Grade’s annoyance with some charities’ use of unaddressed mail, or “anonymised “dear homeowner” mailshots”. It stated that Grade “set out plans to stop charities sending free pens and cards to attract donations”, although subsequently this was corrected in a statement by the Fundraising Regulator.
It was further claimed that Lord Grade had plans to introduce “further regulations to force fundraising websites [only JustGiving was named in the printed interview] to disclose hidden fees”.
The interview (on page 10) was headlined ‘I’m going to put a stop to those free charity pens’, suggesting that that was the Fundraising Regulator’s aim and/or within its remit.
The death of Mrs Olive Cooke in 2015 appeared as early as the third paragraph of the article. She was the Royal British Legion’s longest-serving volunteer poppy seller. The interview was published on 11 November. (The Times even covered this story with an large photo of Mrs Cooke at the top).
The interview also stated that the new Fundraising Preference Service, established in July, had been used by “10,000” people who had “demanded their names and addresses be removed from charity databases”.
The figure for its first month to 7 August was 2,617, or an average of 8.4 people an hour. Two thirds of the suppression requests came in the first six days after its launch.
By the end of August the number of people who had used it had risen to 3,718. It is not clear how that total nearly trebled over the next two months. It is possible that there was confusion between the number of suppression requests and the number of users.
Lord Grade also shared again his tactic for dealing with unwanted communications from fundraisers. He pretends to be a “leading litigation barrister” and threatens legal action. He claims this approach is effective: “I never hear from them again”. He shared these tactics when addressing members of the Institute of Fundraising at its National Convention in 2016.
Despite the prominent and negative front page headline, neither Lord Grade nor Christopher Hope used the word “begging” in the interview to refer to fundraising.

Lord Grade was referring to a report published last month by the Fundraising Regulator which detailed complaints about fundraising, an annual report that was initiated by its predecessor the Fundraising Standards Board.
The report revealed that the largest source of complaints was direct mail (or “junk mail” as the Telegraph referred to it), with 16,000 of the 43,000 complaints received in 2016 relating to this fundraising method. Hope wrote: “More than 80 per cent of these concerned enclosed free items such as unsolicited pens, badges and Christmas cards”.
Lord Grade praised the public’s response, and presumably its understanding of fundraising expenditure, testing and results. He said: “They are saying, ‘Why are they spending this money? That could go to the charity’, which actually is a really smart public response”.
Despite two years as Chair of the Fundraising Regulator, he did not explain that expenditure on direct mail typically raises more money than it costs, hence its longstanding and widespread use by many charities.

“Lack of awareness” of fees charged by crowdfunding platforms

Lord Grade told Hope that “he was also concerned about a lack of awareness among donors about fees charged by crowdfunding platforms to run donation pages”. In the article he mentions only JustGiving, which charges 5% to provide the service that has raised $4.5 billion since 2001.

Lord Grade did not mention that the statistics about complaints about fundraising enclosures in the Fundraising Regulator’s complaints report differ markedly from those in the Fundraising Standards Board’s reports.
The Fundraising Regulator’s latest report for 2016 says that 82% of complaints about addressed direct mail were related to enclosures (page 10). The figure in the FRSB’s report for 2015 was just 14% (see figure 18 on page 28). That was  3,128 complaints, up from 1,492 in 2014.
One (or both) could have been wrong, or perhaps the UK charity sector had substantially increased its unaddressed mail activity. The latter is not impossible, given the closure of so many telephone fundraising and face-to-face agencies during 2015-16.

The Fundraising Regulator issued a response later that day to “clarify” its Chair’s comments.
The response stated: “The Fundraising Regulator does not seek to ban ‘enclosures’ in addressed mail, although we recognise that they are an issue for some people and we are speaking to charities about the concerns revealed in our Complaints Report; nor do we believe that charities are dodging rules in this respect.”
Stephen Dunmore, Chief Executive of the Fundraising Regulator, was quoted in the article explaining that unaddressed mail, a service offered to businesses and charities by the Royal Mail, was not within the Regulator’s remit. “If it is addressed to an individual then the Fundraising Preference Service will stop it; if it is just mail that comes through then there is no one stopping it because the Post Office has to deliver it”.
Lord Grade issued a clarification himself, writing for Civil Society Voices, in which he stated that “the regulator was not looking to stop charities sending unaddressed mail, nor ban any “enclosures” within addressed direct mailings to supporters”.
NCVO’s Policy Director Karl Wilding further explained: “Charities need to be able to get in touch with people in order to attract new supporters, and writing to addresses in a specific area is an efficient way for them to do that. Unfortunately, Royal Mail don’t exclude specific addresses when they’re delivering to an area, they either deliver to all homes or none”.
Wilding was interviewed later in the day on Sky News, and subsequently shared some of his thoughts and reactions to the Telegraph’s story.

2/ The headline is ideological nonsense. I get it generates sales/clicks, but it undoes good work both the journalist and newspaper have done to uncover poor practices in our sector that needed to change.

3/ Here’s some really useful stuff from @ncvo on how to talk about your charity: https://t.co/YYslOQb7Gt This is how we do it. It would be great if you (and your donors) join in with us on days like today.

6/ Some of the content is wrong too. The @FundrRegulator is not seeking to ban inserts such as pens in fundraising mailings. This is uncomfortable for @FundrRegulator, but we need to ask why things are getting lost in translation.

7/ Lord Grade – chair of @fundrregulator rather has a knack of weaponising the issue – the data from today was published last month. I understand the need to make the public feel they have a champion, but…given the push by charities to change, so now does his narrative

8/ As a charity sector we have a good story to tell about how we have listened to the public and acted on their concerns. Stronger, better fundraising regulation. A shift away from approaches that lots of people did not like.

We have come a long away. We're better, not perfect.

9/ Complaints now – eg unaddressed mail – feel more like edge cases than mainstream. But they are concerns that some in the public nevertheless are expressing – and they’re being expressed more thoughtfully.

10/ The public’s concerns about inserts, for example, are expressed from the perspective that they are inefficient, directing resources away from charitable expenditure. We have to engage with these concerns. They’re justified. #sortoutorexplain

11/ Finally, amidst all the noise, it can be difficult to remember that the British public are incredibly generous. They continue to support charities, giving time and money. Let’s continue to make them proud to do that.

The Institute of Fundraising published a response to the Daily Telegraph’s coverage. It stated: “This is a misleading headline and does not reflect the high standards in the way charities raise vital funds.”
It attempted to put Lord Grade’s comments and the Regulator’s annual complaints report into context. “Across the charity sector there is a very low proportion of complaints compared to contact with the public, as the Fundraising Regulator highlighted when they produced their annual complaints report earlier in the year. ”
The Institute restated the role and value of fundraising: “Research shows that 80% of people say that they donated to a charity after being asked to, rather than as a spontaneous decision. Without fundraising we would not have the same level of charitable giving.” It also highlighted the responsiveness and transparency of charities: “Where issues or concerns are highlighted, including by the Fundraising Regulator, individual charities respond rapidly and the fundraising community works collectively to address these. ”

Saturday’s Daily Telegraph contained a number of fundraising inserts from charities and fundraising organisations which doubtless would not have welcomed the term ‘begging’ in a headline about fundraising on that day.

Yesterday's Telegraph, along with the unsolicited charity appeals it came with. H/t Jenny-Anne Dexter who pointed this out on Fundraising Chat. pic.twitter.com/Yts3t7UXFE

It was also the day on which the newspaper launched its Christmas Charity Appeal on behalf of Missing People, Canine Partners and FareShare. The appeal’s logo sat alongside the ‘begging’ headline on the front page. 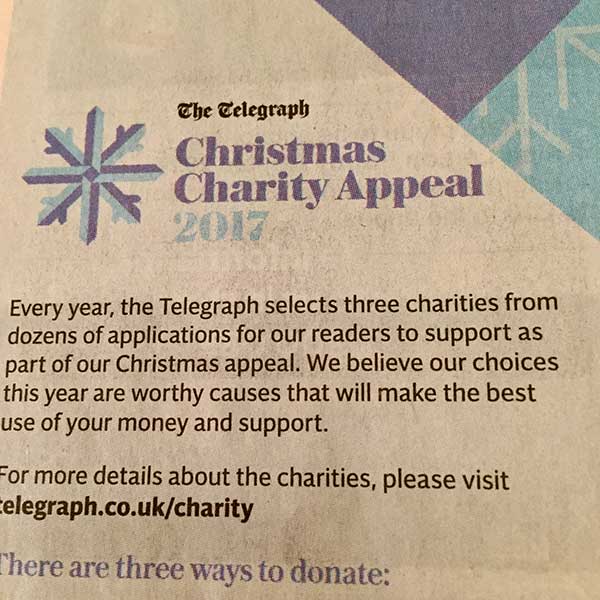 ‘Begging’ (to use its own headline) on behalf of charities?

Just above it was the poppy symbol, which is used by permission from the Royal British Legion.
A petition calling for Lord Grade to resign as Chair of the Fundraising Regulator is still available on change.org.