On today’s 400th anniversary of the death of William Shakespeare, UK Fundraising brings you some selected lines from his works that can inspire fundraisers and remind us of how we can achieve even more for our causes.

1. “How far that little candle throws his beams!” 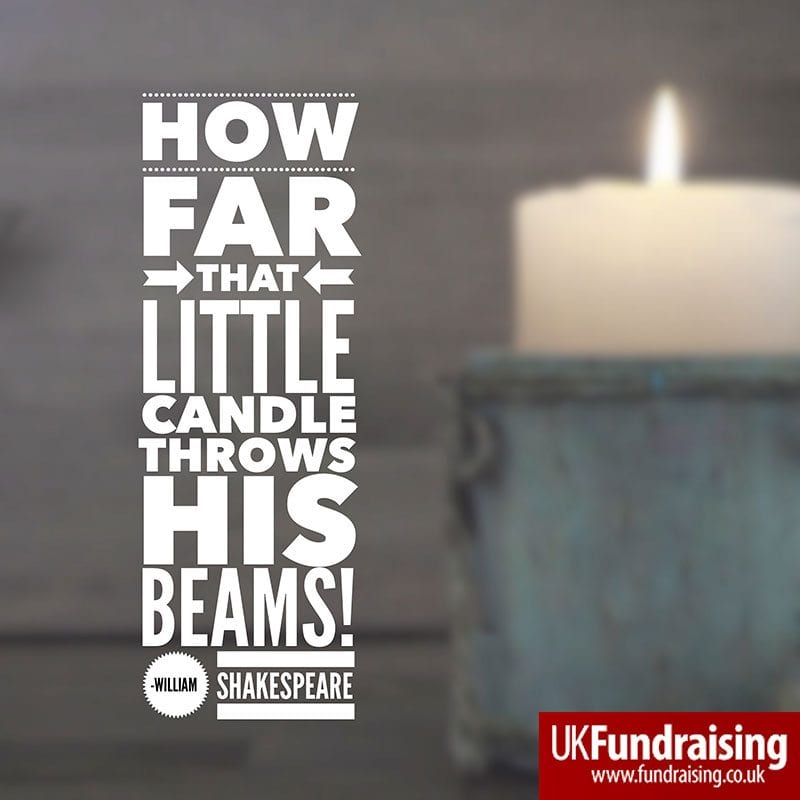 Every little fundraising action counts. All fundraising campaigns, large and small, start with one gift.
(The Merchant of Venice) 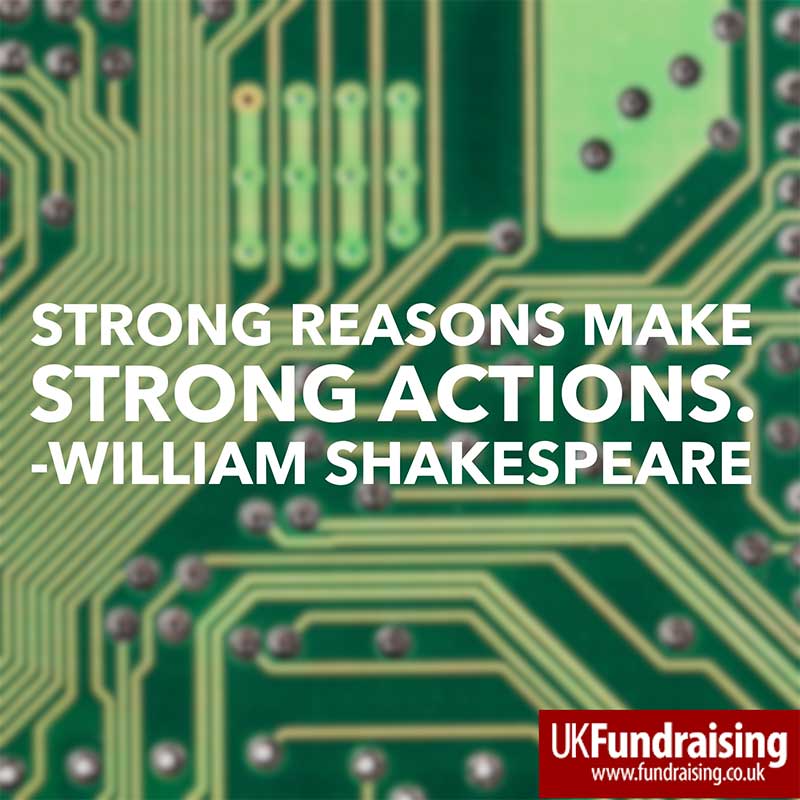 For the data analysts amongst fundraisers. Know your donors, understand the data you’ve gathered on who gives and why, and make effective use of it.
(King John)

3. “Love sought is good, but given unsought is better.”

Fundraising is essential, but many people are ready and willing to give or raise funds themselves – as the DIY fundraising involved in Ice Bucket Challenge, Comic Relief, and BBC Children in Need attest.
Don’t get in the way of donors (and that includes having a mobile responsive donation form!) , and support those who are doing it themselves. Do everything you can to inspire people to give and to take action for you.
(Twelfth Night)

You’re a fundraiser – the clue is in the word. You are in the remarkable position of being able to help secure money to enable your charity to make a positive difference in the world. Press coverage, Twitter followers, supporter names on a letterhead are all nice, but without money, your organisation’s impact will be minimal.
(The Merry Wives of Windsor, Act II, Scene II)

5. “Of all base passions, fear is the most accursed.”

Asking for money can be a challenge for many at the beginning of their career. Some have an innate ability to do so, but fear or nervousness is part of the process of standing in front of someone and asking them to give money to support your cause. But asking can be learned, and you can learn how to master your fears. Asking gets easier with practice. Don’t let it hold you back.
(King Henry the Sixth, Part I, Act V, Scene II)

6.  “Too swift arrives as slow as too tardy”

Planning in fundraising is everything. Don’t avoid your research – know your fundraising targets, how you are going to reach them, and how you will measure results. Even many emergency fundraising campaigns are based on planning and preparation.
(Romeo & Juliet)

Not everyone will support your cause, or indeed any cause. Hearing ‘no’ is a big part of being a fundraiser. Accept it – it’s seldom personal.
But note that some will have hinted that, while they won’t give today, they might give on another occasion.
(Richard III, Act IV, Scene ii)

One for the entrepreneurial fundraisers out there. So, your last campaign exceeded your target? That’s not enough for you: you’re looking at the next fundraising challenge and you can’t wait to get started on it.
(Troilus and Cressida)

9. “And oftentimes excusing of a fault doth make the fault the worse by the excuse.”

Determination and effort are important to fundraising success, but not if it means you are simply repeating the same old methods, even if you have no idea if they are effective.
Face facts, spend time working out what isn’t working, and act on it.
(King John)

10. “How poor are they that have not patience? What wound did ever heal but by degrees?

Fundraising seldom involves any quick wins. Remember that fundraising job where you found you were being asked to raise five times your salary within one year from scratch? Have the courage to explain why that is not reasonable and why a steady, measured approach is more likely to reap dividends.
(Othello)

11. “… for in such business action is eloquence”

Just do it. Prepare and plan but at some point you have to make that ask or launch that campaign. The quality of your direct mail pack or the line-up at your fundraising concert might not be perfect, but as a fundraiser you are judged on what you achieve and how much money you raise.
(Coriolanus)

12. “The purest treasure mortal times afford is spotless reputation—that away, men are but gilded loam, or painted clay.”

Trustworthiness matters. Donors have to trust what a charity and all its staff and volunteers do.
(Richard II)

13. “This above all, to thine own self be true, and it must follow as the night the day, thou canst not then be false to any man.”

Be authentic and trustworthy. Representing a charity and its beneficiaries is an honour and you need to live up to it. Sometimes this involves speaking truth to power.
(Hamlet)

Sometimes, as a fundraiser, you are right and others are wrong and, for the success of the appeal or the charity, you need to be able to argue your corner and stand your ground. Just make sure you are fighting the best battle.
The Taming of the Shrew, Induction, Scene i

15. “To business that we love we rise betime and go to it with delight”

You do love your job as a fundraiser, don’t you? It’s seldom easy, but you know you’re in an unusual position to make a difference.
(Anthony and Cleopatra)

16. “Wisely and slow; they stumble that run fast.”

Be good at what you do. If you need to do more, talk to other fundraisers and seek out training. It’s down to your hard work and ingenuity, but you can always improve.
(Henry VIII)

18. “Fortune reigns in gifts of the world”

Be lucky! Sometimes even the best planned fundraising campaigns or ideas just don’t work, when they really should have done. Pick yourself up, and your team, and move on to plan B.
(As You Like It, Act I, scene ii)

19. “There is a tide in the affairs of men which, taken at the flood, leads on to fortune; omitted, all the voyage of their life is bound in shallows and in miseries.”

Take risks. Fundraising, like any business activity, involves a wide range of skills, and one of them is knowing when to make your move.
(Julius Caesar, Act IV, scene iii) 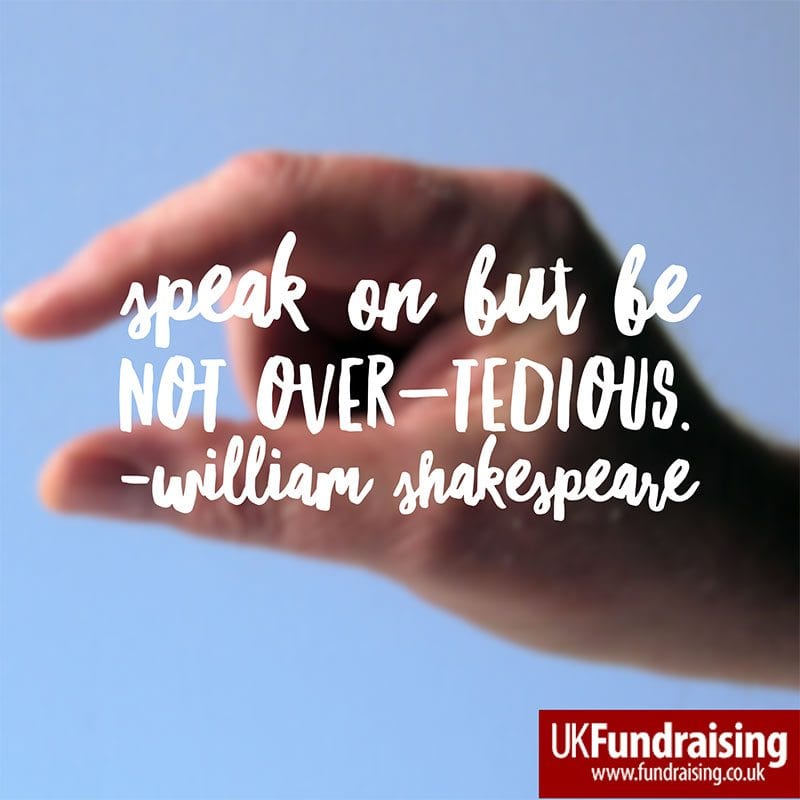 Fundraisers have to be very good at conveying their message succinctly and effectively. Practise that elevator pitch.
(Henry VI)

Was fundraising easier in earlier days? Before new regulations, opt-in, a sceptical press, and massive funding cuts?
Don’t you believe it! Anyway, it doesn’t matter: your charity needs you to raise funds now.
(As You Like It, Act II, scene vii)

Can you tell a good story about the good your charity does, and why it needs money to achieve that? It’s an essential skill for most fundraisers. And in the days of concise social media posts, you need to get even better at communicating these messages succinctly.
(Richard III, Act IV, scene iv)

23. “‘Tis not enough to help the feeble up, but to support them after”.

One off donations are valuable, but for your charity to succeed, you’re going to need regular gifts.
(Timon of Athens, Act I, scene i)

The best fundraisers are those who are donors. What does it feel like to give? And surely you give to your own charity?
(The Two Gentlemen of Verona, Act 1, scene ii)

How you raise funds matters – to donors, to you and to the charity.
(Julius Caesar Act IV, scene iii)


[Tweet “Twenty five quotations from Shakespeare that fundraisers can learn from”]

William Shakespeare had a few thoughts on charity and giving.

“Charity itself fulfills the law. And who can sever love from charity?”

“Charity, Which renders good for bad, blessings for curses.”

“Lady, you know no rules of charity, Which renders good for bad, blessings for curses.”

Here is another fact for today. The longest word used by Shakespeare in one of his plays could well be applied to all donors:

The longest word used in a #Shakespeare play? Honorificabilitudinitatibus (n.) in Love's Labour's Lost. Could be applied to charity donors.

Main image: William Shakespeare (1564-1616). Engraved by E.Scriven and published in The Gallery of Portraits with Memoirs encyclopedia, United Kingdom, 1835. By Georgios Kollidas on Shutterstock.com. 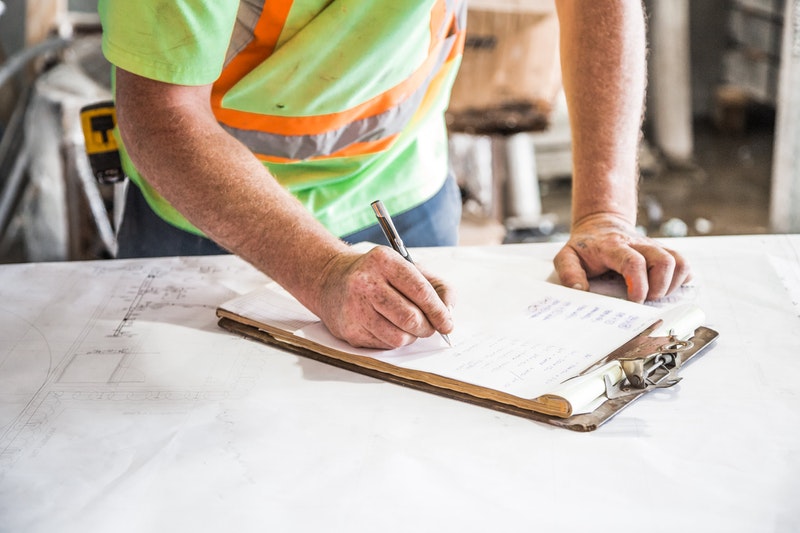 Many a true word said in jest 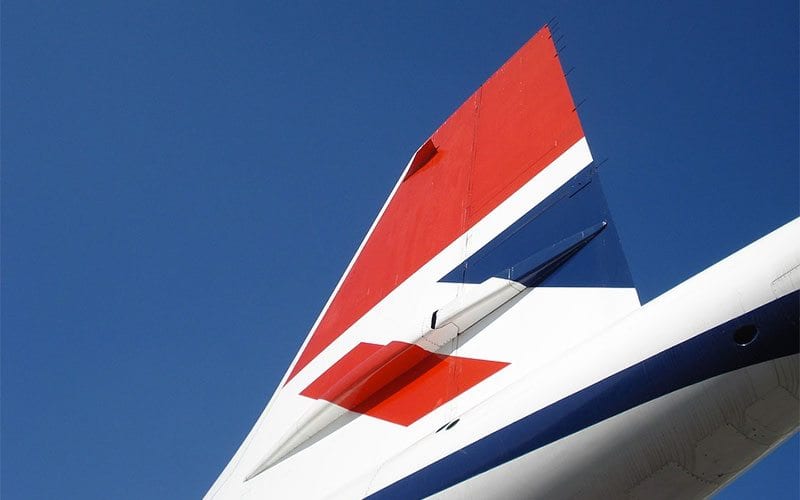