Joint research by six charity sector membership bodies has found that the charity sector’s income has not risen since 2009, and the sector is not enjoying the recent growth in the economy experienced by some other sectors.
The charity sector has lost around £1.7 billion from cuts in government expenditure since 2009/10. From its peak of 2007/08 government expenditure with charities has dropped by £2 billion. When added to reductions in grant income, ‘tepid’ growth in public donations and inflation, charities will, on current projections, face a shortfall of £4.6 billion in income by 2018/19.
According to the NCVO Voluntary Sector Almanac, “overall voluntary sector income has fallen from £42.1bn in 2007/08 to £40.7bn in 2013/14. This leaves the sector’s income at the same level as it was in 2009, following the financial crisis, or in 2006, eight years previously.”

The report, ‘A financial sustainability review of the voluntary sector’, reveals that small and medium-sized charities have been hardest hit. Charities with incomes of between £100,000 and £1 million have seen the largest falls in their income and assets: together they have experienced a 38% reduction in income from government sources between 2007/08 and 2013/13.

Only large charities have managed to increase income from government. 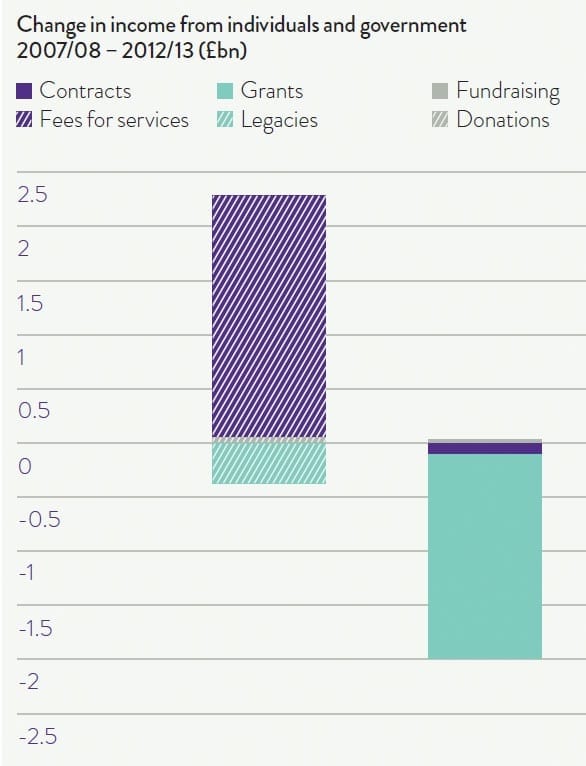 The largest increase in charity income is from charging individuals for services.

Increases in individual giving will not offset the amount being lost in government funding and contracts.

The rise in individual giving will not make up for the drop in government funding and income.

Corporate giving will not be the solution either. The report confirms that

Inflation has also hit charities. While its rate might now be at historic lows,

“Between 2007 and 2014, the average non-domestic electricity bill increased by 24% in real terms. Over the same period, the cost of a second class stamp, commonly used by charities to communicate with beneficiaries and supporters, increased from 24p to 53p, the price of unleaded petrol rose by 45%, and the cost of stationery and other printed materials rose by 26%”.

The report suggests that:
“In order to retain the same level of spending power, the voluntary sector would need to generate £3.14bn in income or savings to make up for the eroding effects of inflation”.
That is a substantial challenge.
Peter Lewis, chief executive of the Institute of Fundraising, said:

“As this Review illustrates, whilst many charities who are able to invest in fundraising are continuing to grow their support from the very generous British public, smaller charities are benefiting the least from the economic recovery. With government grants at an all time low now is the time for Government to work with charities to help them diversify their income streams and find more innovative ways to raise money for the good causes they support, both in the UK and overseas.”

Of course, demand for many charities’ services continues to grow, while their income falls or stagnates. Given the additional cuts in government funding earmarked over the period of this government, and possibly into the next, this situation is not likely to ease for several years.

The report’s conclusions includes the recommendation that “voluntary organisations will need to make over £3bn in efficiency savings in order to maintain their spending power. Voluntary organisations need to begin working now to identify areas where savings can be made and design strategies for achieving them.”
It adds the practical reminder that “voluntary organisations are also advised to make explicit the impact of inflation when bidding for contracts and grants”.
NCVO offers 10 steps to move towards more sustainable financing. These include:
• don’t put all your eggs in one basket
• factor in inflation
• map your assets and liabilities
• map your organisation’s capabilities and capacities
The research was conducted over the past 12 months. It is based on data from the NCVO Almanac together with sector surveys, research reports and input from staff and organisations in the sector.
It was conducted in partnership with Charity Finance Group, Small Charities Coalition, NAVCA, Institute of Fundraising and Locality.
You can download A financial sustainability review of the voluntary sector from NCVO in PDF.

NCVO asks: how has your charity adapted following the recession?