Income grows when the entire organisation is proud of its fundraising as an integral part of its mission.
This is what Professor Adrian Sargeant said in summary of the Great Fundraising report that last year set out to identify the differences between rapid-growing organisations and those that were flat lining, or worse.
Thus, in this simple but seismic insight, the success of a fundraising organisation became not us fundraisers, but everybody else in our organisations; the trustees, the CEO, the executive teams, PR, communications and campaigns teams, finance, HR, policy teams and every single professional and volunteer who carries out the vital and wonderful services provided by our employers.

Proud to be a fundraiser

This year the ‘Proud to be a fundraiser’ campaign will be launched at the Institute of Fundraising National Convention. It is a confident move. It is the first steps in a proactive drive by the trustees, Peter Lewis and their team of staff and volunteers to boldly advance the mission of the Institute.
In organisations with declining or stagnating fundraising performance all our experience across the seven countries in which we work combines with the outcomes of the many pieces of research carried out by Prof. Sargeant and colleagues. In those organisations, the leadership thought short term, perceived fundraising as being of secondary importance to ‘the mission’ and saw their purpose as being to spend as little money as possible. Fundraising was seen at best as a nuisance and at worst an embarrassment.
In the great fundraising organisations, the leadership perceived their role as being ‘to spend as much money as possible in fulfilling our mission.’ This, of course, meant massive fundraising, thinking medium to long term and embracing fundraising as critical to, and intertwined with, the mission. As one memorable Chief Executive put it to me recently;

“We need to reach many more people. Therefore money and the mission are exactly the same thing.”

Bring your CEO or a trustee free of charge

We have lost count of the number of times we have heard a fundraiser say words like “You have convinced us, but really it’s our CEO or trustees who need to hear this.” So, for us and the Institute, it’s ‘money where your mouth is’ time and so any fundraiser attending the Monday plenary at the National Convention on 7th July may, and should, bring your CEO or a trustee free of charge. Please convince them to invest an hour. It is very, very important.
In the great fundraising organisations there was another differentiating behaviour; the obsessive learning culture. Even when they were great, they sought ways of becoming even bolder, even greater and raising even more money. That’s why CEOs and trustees of successful fundraising organisations should come to National Convention, too. There’s always something beyond the here and now and you may just find it by mingling with about 1,000 of the UKs best professional fundraisers.
If your CEO or trustees are certain that they already have enough reserves or income to fulfil their mission, or have learnt everything there is to learn about leading a great fundraising organisation, please congratulate them and invite them to speak at the National Convention in 2015. This would be Nirvana for us all and we will be delighted to hear how it was achieved so we may learn from the best.
If however, your leadership would like more money to apply to the mission, then we look forward to seeing you at National Convention on 7th July.
Book your place at National Convention today to bring your CEO or Trustee free* to the opening plenary with Alan Clayton and Jayne George.
[message_box title=”Bring your CEO for free offer” color=”blue”]This offer is available to delegates who book to attend National Convention on Monday 7th July. Email [email protected] with your CEO/Trustee details and your booking Reference Number to claim their free place.[/message_box]
© Alan Clayton, Revolutionise Clayton Burnett Ltd., April 2014 July. 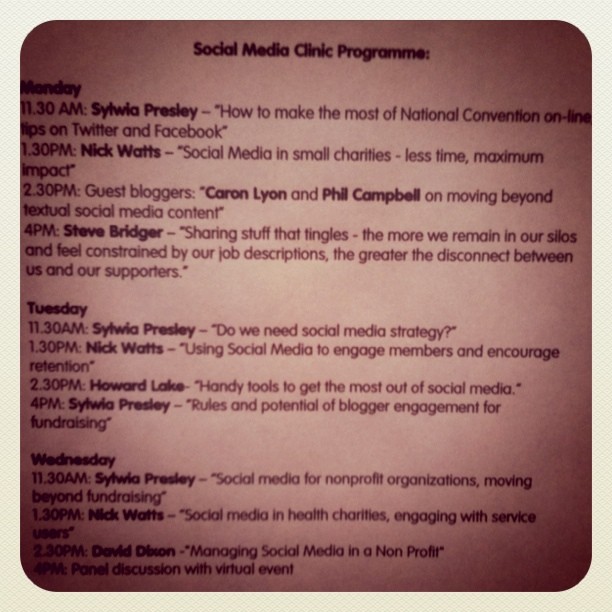 Why I love complaints

Day three at the National Convention 2014